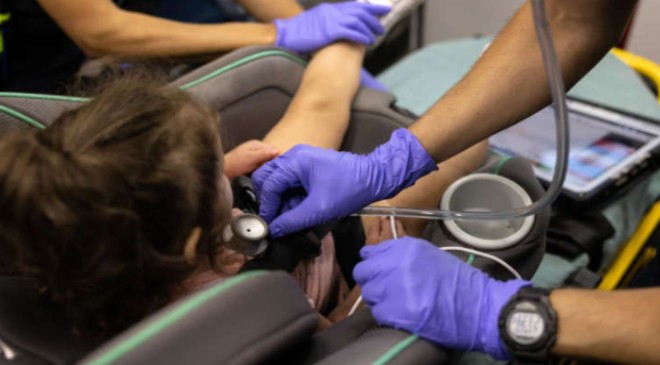 WASHINGTON – Trying to get screened for the coronavirus before the holidays, Gia Ingenito stood in a long line at a free testing site in a park two blocks from the White House last week.

The free, at-home tests at her neighborhood library had been snapped up in minutes.

She patiently waited in the December chill, on the day President Joe Biden announced measures to make at-home tests more available – although not until January.

Next month, Americans will be able to request free tests from a website, and kits will be mailed to homes.

The website, and other details about how and when the tests will be distributed, have not been released.

Also still to come are the parameters for how private health insurers will have to pick up the tab for over-the-counter tests, a requirement Biden announced at the beginning of December as the highly infectious omicron variant started to spread.

If consumers have to seek reimbursement from the insurer after buying a test, rather than getting it free at the pharmacy, that would be “better than nothing,” said Ingenito, 37, an executive assistant at an accounting firm.

“But it’s another deterrent,” she added.

Ingenito said it would be “ideal” if consumers could just show an insurance card when picking up an at-home test at the pharmacy, similar to how she provided her insurance information at the city’s free site.

She’s not alone in that view.

It’s not clear whether the White House plan will require consumers to seek reimbursement from insurers or if insurers will work with pharmacies to make the tests free to consumers up front.

Several top health experts urged the latter approach. They said requiring reimbursement would create additional hurdles for consumers, who would have to save receipts, submit them and wait to get their money back. And the country can’t afford a burdensome process when infections are rising, the demand for testing is higher than ever, and people are gathering inside during the winter months.

“If you are somebody who is struggling to make ends meet and they’re being asked to spend some of your own money to buy rapid tests and then wait for reimbursement, that’s really not even going to be an option for people even if they do get reimbursed,” said Celine Gounder, an epidemiologist who advised Biden’s transition team on COVID-19.

Insurers might not want to make it too easy to get the free tests. Extensive use could escalate their costs, and health plans warned those bills could be passed to consumers through higher premiums.

Ensuring that Americans can get tested easily and affordably is a central part of the administration’s strategy to reduce the spread of the coronavirus without shutting schools and businesses. In addition to the cost obstacle, tests are in short supply. Retailers limited how many can be purchased at a time.

“One of the other things that we know that has to be done is more testing,” Biden said when announcing new measures to help. “And on that score, we are not where we should be.”

Omicron doesn’t need to ruin holidays: Here’s what you need to know about rapid tests

Adrienne McCray, 47, a landscape architect who put an hour’s worth of money into her parking meter before getting in line for a coronavirus test Tuesday, said she would use her health insurance to get an at-home test even if it meant having to seek reimbursement after purchase. She predicted many others would bypass that option.

“It just needs to be more accessible all around,” McCray said of testing.

Insurers can make it easier or harder

Jeff Zients, the White House COVID-19 response coordinator, said last week that all ideas, including requiring insurers to work with pharmacies so people don’t have to file for reimbursement, are “on the table.”

“That’ll be worked through across the next couple of weeks with clear guidance on how American consumers with private health insurance can be easily reimbursed for their test,” Zients said during the COVID-19 team’s final briefing before Christmas.

Without a mandate, insurance companies will decide how easy they want it to be for consumers to buy tests, said Larry Levitt, executive vice president for health policy at the Kaiser Family Foundation, a nonpartisan research organization.

“My guess is they’re going to make it hard, not easy, for people to get them,” he said. “The cost could end up being substantial.”

Insurers are required to pay for coronavirus tests administered at testing sites and medical offices, which can cost $100 or more. Home tests, which consumers can buy without a prescription at retail stores or online, are less expensive. Walmart sells the BinaxNow kit for $14. Others cost $25 or more.

The cumulative cost would quickly mount if the more than 150 million people with private insurance want to test themselves weekly, or even more often, with at-home kits.

Despite what insurers are spending on pandemic-related costs, Levitt said, they have “still done quite well” financially.

Even before Biden’s announcement, Express Scripts, one of the nation’s largest pharmacy benefit managers, announced it offers health plans the option of covering over-the-counter coronavirus test kits through their pharmacy benefit plans.

If insurers go along, consumers could use their Express Scripts member ID card to pick up tests at participating in-network pharmacies starting in January.

Express Scripts didn’t respond to questions about whether insurers expressed interest in that option.

Kristine Grow, spokeswoman for America’s Health Insurance Plans, said it’s too soon for her trade association to comment on “potential approaches until we receive further guidance from the administration.”

As we continue our work with the administration in the fight against COVID-19,” Grow said, “we will make sure that the full impact of these actions on patients, consumers and hardworking families is understood.”

The nation’s pharmacies might oppose any effort to nix the up-front consumer payment requirement. Drugstores are fine with selling the tests, but they’re concerned that having to work out payments with insurers, instead of customers, will burden pharmacists  strapped by the pandemic.

“From the patient standpoint, absolutely, it would be easy and probably more accessible,” Hannah Fish, director of strategic initiatives for the National Community Pharmacists Association, said of having pharmacists get paid by health plans rather than consumers. “From a pharmacy standpoint, it would actually make it a little more challenging.”

Testing services tend to be covered on the medical benefit side of health insurance rather than the prescription side, Fish said, and reimbursements on the medical side are not as straightforward – and often delayed.

Not every pharmacy has a contract with all insurance plans, and tests don’t have to be purchased in pharmacies; some will be purchased online or through other retailers.

Experts said the White House’s testing plan should be driven by what will deliver the biggest public health benefit, not what hurdles it might create for insurers and pharmacies. Obstacles for consumers will have a negative impact on the ultimate goal: getting the pandemic under control.

“If consumers face out-of-pocket costs, even if they’re relatively cheap, the likelihood is that they won’t use the tests,” said Rena Conti, associate professor at the Questrom School of Business.

She said decades of economic research shows that the default option matters. So if consumers have to seek reimbursement, inertia will set in and they won’t do it.

Sabrina Corlette, co-director of the Center on Health Insurance Reforms at Georgetown University’s McCourt School of Public Policy, said insurers might actually find it easier to deal with pharmacies and pharmacy benefit managers instead of consumers.

“There’s not just the cost to the carrier in terms of cutting the checks,” she said. “It’s a hassle factor for them, too, to be collecting all these receipts.”

Still, she said, “so much depends on the guidance that the administration puts out next month.”

Health and Human Services Secretary Xavier Becerra said insurers could challenge the reimbursement requirement, similar to how the administration’s mandate that larger employers ensure their workers are either vaccinated or regularly tested is before the Supreme Court.

“We’ve done what we think our authorities allow us to do. Now we’ve got to see it play out,” Becerra said this month. “So if an insurer says, `I’m not paying for it,’ we’ll test that out.”

Micah Johnson, who was waiting for a coronavirus test last week to “take every precaution” before seeing his granddaughter, spent 20 minutes on hold trying to find a testing site before lining up in the park.

Johnson, 73, said he welcomed more options but feels the government has been more reactive than proactive in dealing with the pandemic.

“It is what it is,” Johnson concluded. “I’m just going to do my part – and try to take advantage of what is available.”