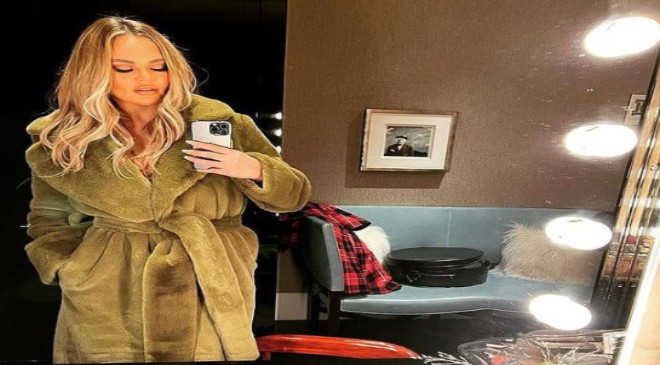 She is well known for showcasing her sense of style on social media and in various promotional shots.

And on Wednesday, Chrissy Teigen was seen cutting a very stylish figure in several snaps that had been shared from her trip to London to her Instagram account.

The 36-year-old media personality was first seen taking a selfie and showing off her golden locks in a dressing room before heading out to pose for a shot in front of the London Eye.

The cookbook author was also seen wearing a stylish set of high-heeled shoes at the tourist attraction.

The social media powerhouse notably carried a sizable bag with her as she took in the sights of the city.

Her gorgeous blonde locks fell onto her shoulders and backside while she posed for the shots.

Teigen later shared shots from various eateries that she and her family had seen on their outing.

The writer also posted a video of a particularly fast-moving carousel to her Instagram Story.

Teigen’s husband, John Legend, was also seen posing with the rest of the family in front of the Eye.

The 43-year-old songwriter stayed warm in a puffy light brown coat worn on top of a white t-shirt during his trip.

The All of Me singer also wore a stylish pair of slim-fitting black jeans and boots during his outing.

He wrote a short message in his post’s caption that read: ‘Finally doing tourist things in London. I’m always here for work.’

Teigen and Legend initially met in the mid-2000s while they were working on the set of a music video.

The pair eventually began a relationship and the hitmaker asked the big question in December of 2011.

The two went on to tie the knot during a wedding ceremony that was held in Italy in 2013, and they eventually started a family with Luna’s arrival in 2016.

The happy couple eventually expanded their family with the addition of Miles in 2018.