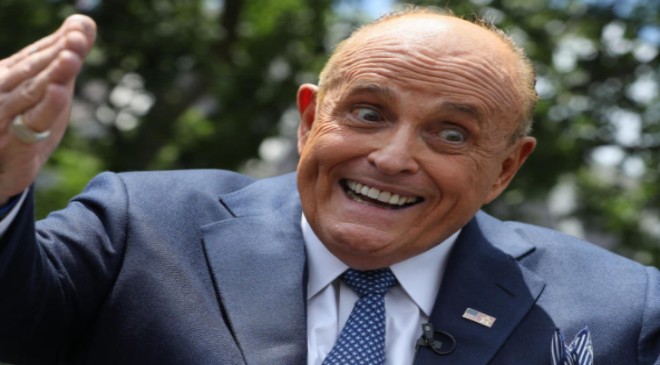 Trump-allied lawyer Rudy Giuliani is once again saying that he possesses evidence of voter fraud in the 2020 election, claiming on Thursday night he had “900 death certificates” that prove dead people voted.

“Let’s look at Georgia for a moment, Raffensperger, the Secretary of State, who until recently, was saying that it was a perfect election,” Giuliani said, referencing Georgia Secretary of State Brad Raffensperger. “The idiot said to the president, it was a perfect election. He said to the president, you know, we looked and we couldn’t find any dead people who voted.”

“I found 900 people whose death certificates I had, they all died in 2000, before the election,” Giuliani said. “I think the actual number our expert estimated was more in the range of about four or five or six thousand. But I had 900 death certificates. They’re people who voted!”

“Don’t tell me it was a perfect election, then I know you’re a damn liar,” Giuliani added.

During an earlier segment of the broadcast, Giuliani told Howse: “You can’t let 300 dead people vote, much less 6,000!

Giuliani did not display the death certificates on-air and did not reveal where he had obtained them. Giuliani did not immediately respond to a request for comment from Insider.

Other right-wing figures have also floated the conspiracy theory that dead people voted in the 2020 elections. Lindell, for instance, claimed without evidence in October that 23,000 dead people voted using a prison address.

During his appearance on “The Lindell Report,” Giuliani also continued to push a variety of unsubstantiated election fraud theories. For one, Giuliani claimed that he had “400 affidavits” from people who witnessed election fraud. He cited the example of an unnamed “very religious woman” in Detroit, who he says told him that she witnessed election fraud. The former mayor of New York City also said, without substantiation, that he saw a video of people “casing the joint” at a vote-counting center in Georgia, likening it to videos he used to see when he used to “prosecute bank robbers.”

Since the 2020 election, Giuliani has consistently pushed and parroted baseless election fraud claims. This kicked off at a now-infamous press conference in November 2020 outside Four Seasons Total Landscaping in Pennsylvania, where Giuliani told reporters the Trump campaign planned to challenge the election in court while making baseless claims of election fraud.

Giuliani was suspended from practicing law in New York in June, after a court found that there was “uncontroverted evidence” that he made “demonstrably false and misleading” statements on election fraud.

He has also admitted under oath that he did not verify some of the election fraud claims that he parroted, and got the “evidence” from social media. Separately, Giuliani also told a Dominion Voting Systems lawyer that he “didn’t have the time” to verify voter fraud claims about the 2020 election after he heard about them.

Dominion is suing Giuliani and others who peddled baseless claims saying that the electronic voting company rigged the 2020 election in favor of President Joe Biden.