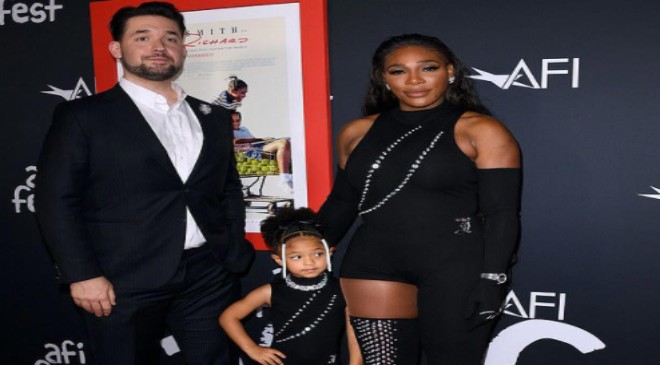 All attention was focused on Serena Williams and her family as they made their way down the red carpet at the AFI Festival Closing Premiere of King Richard.

The tennis star, 40, wore a black dress that showed some skin as she posed for pictures while standing outside the TCL Chinese Theatre in Hollywood.

While the black fabric covered her torso and one leg completely, her right leg was covered by a stocking and her shoulders were allowed to breathe as well.

She wore matching arm sleeves that started in the middle of her biceps and covered her fingers. Her chest was covered in shiny silver jewels.

The 39-time Grand Slam title winner did not attend the premiere alone. She was flanked by her husband Alexis Ohanian, with whom she will celebrate her fourth anniversary this week, and their 4-year-old daughter Alexis Jr.

While the older Alexis wore a simple suit with a ruffled, white button-down shirt, Williams’ daughter wore a smaller version of her own mother’s outfit complete with the same pattern on her torso and stocking.

King Richard, set for a wide release this upcoming Friday, centers around the younger years of Venus and Serena Williams as their father, Richard, pushes them to be great.

Will Smith will star as the titular character. The Punisher actor Jon Bernthal plays their tennis coach Rick Macci and Godfather of Harlem actress Demi Singleton stars as Serena.

Principal photography for the film began in January 2020 but was halted when the coronavirus pandemic shut down much of the world. Filming began again later that year in October.

The four-time Olympic gold medal winner has already seen the movie and recently praised Will Smith’s performance as her father.

‘It really is super surreal for me and then to have Will play this role as my father and the way he embodied Richard Williams, it took the film to a whole other level,’ the star told Digital Spy. ‘It’s so emotional, it’s well done and it’s a brilliant piece of work.’

She also told the outlet she cries when she watches the trailer and said their really was a bond between the actresses who played herself and her sister.