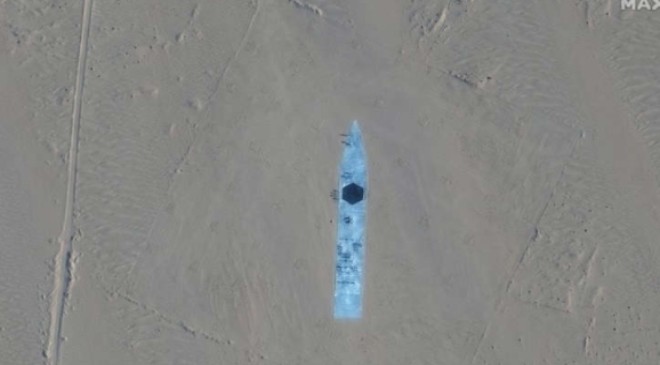 China’s military has constructed mockups in the shape of a US Navy aircraft carrier and US warships, possibly for target practice, according to Maxar satellite images reviewed by the independent United States Naval Institute (USNI).

Satellite images from China’s northwest Xinjiang region appear to show a full-scale outline of a “Ford-class” aircraft carrier currently being constructed for the US Navy, and the shapes of at least two Arleigh Burke-class guided missile destroyers at a new target range complex in the Taklamakan Desert, according to the USNI, a private, non-profit, professional military association.

The complex has repeatedly been used for ballistic missile testing, according to USNI and Maxar Technologies, a space technology company.

“This new range shows that China continues to focus on anti-carrier capabilities, with an emphasis on US Navy warships,” USNI reported.

Militaries around the world regularly build mock-ups of real-world targets such as iconic landmarks, warships, and aircraft carriers.

China’s anti-ship ballistic missile programs are overseen by the People’s Liberation Army Rocket Force (PLARF). CNN has reached out to China’s Ministry of Foreign Affairs and Ministry of National Defense for comment.

In a news briefing Monday, Pentagon press secretary John F. Kirby said the US Defense Department was aware of media reports about the mockups but was instead focused on its own preparedness to support a free and open Indo-Pacific region.

“What we’re concerned about … is the increasing intimidation and coercive behavior of the Chinese military in the Indo-Pacific, and also the coercive tactics they’re using, even using economic tools around the world to bend other nations to their will or to their view of what’s in their best interest,” Kirby said.

We’re focused on developing the capabilities, the operational concepts, making sure we have the resources and the right strategy in place so that we can deal with (China) as the No. 1 pacing challenge.”

According to the Pentagon’s latest assessment on China’s military and security developments, Beijing is rapidly expanding its arsenal and military capabilities.

In 2020 alone, the PLARF launched more than 250 ballistic missiles for testing and training — “more than the rest of the world combined,” according to the Pentagon.

The Pentagon report came amid heightened tensions over China’s military exercises in the Pacific, and was published hours after the most senior US general, Chairman of the Joint Chiefs of Staff Mark Milley warned that China’s military progress amounted to “one of the largest shifts in global geostrategic power that the world has witnessed.”

A senior defense official briefing reporters on the report adopted a similar stance.

CNN has reached out to the Pentagon about the Maxar satellite images.

Beijing claims almost all of the vast South China Sea as its sovereign territory and has stepped up efforts to assert dominance over the resource-rich waters in recent years, transforming a string of obscure reefs and atolls into heavily fortified man-made islands

and increasing its naval activity in the region.

Its territorial ambitions are contested by at least five other countries however, and have been rejected outright by Washington.

In August 2020, China launched a series of ballistic missiles into the South China Sea as tensions with Washington over the disputed waterway escalated. State media made several detailed references to the launches, involving DF-21D and DF-26 missiles — both of which have been touted in Chinese propaganda as highly accurate and able to hit ships moving at sea.

“China’s DF-26 and DF-21D are the world’s first ballistic missiles capable of targeting large and medium-sized vessels, earning them the title of ‘aircraft carrier killers,'” the state-run Global Times said at the time, citing military observers.