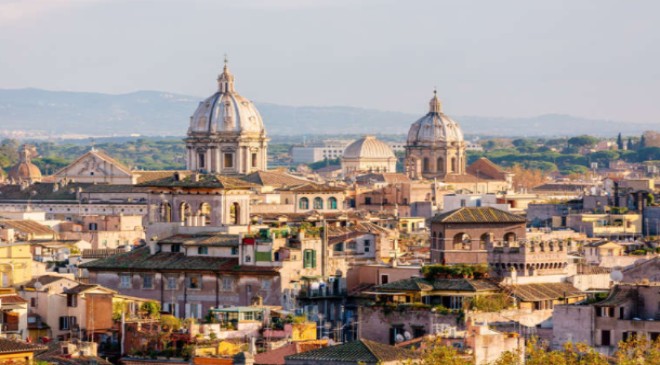 With inaugural flights from hubs in Rome and Milan Linate, ITA officially took to the skies on October 15. But liftoff wasn’t without minor turbulence, most notably some confusion over its name and branding. Just before officially launching service, ITA announced its €90 million (about $104 million) purchase for naming rights of its predecessor, which had been leading some industry insiders to speculate it would continue to operate under the Alitalia banner.

However, executives decided to make the ITA Airways moniker official, although some of the inventory and aircraft it purchased from Alitalia still currently bear the brand. “Until just a few hours before they started operating, we ended up knowing they would not be called Alitalia,” says Jacob Wert, a Germany-based aviation journalist for outlets including Aero Telegraph. “Everyone expected them to be named Alitalia, given that they spent €90 million for that name.”

In addition, the company is reportedly taking on fewer than a third of Alitalia’s 10,000 employees, a move that led to a protest by about 50 former Alitalia flight attendants days after ITA’s launch. According to the AP, union officials say the employees who will work for ITA are being hired at significantly lower pay scales. (A press contact for ITA did not respond to requests for comment.)

As aviation insiders keep an eye on what’s next for ITA, here’s what else travelers should know about the new airline.

Transatlantic routes are in the works

ITA’s initial network will span 44 destinations, 59 routes, and 191 flights in total. With bases in Rome’s Fiumicino and Milan’s Linate airports, it will offer 24 domestic and 56 international options to start, increasing in 2022 to 58 destinations and 74 routes. By 2025, plans are to expand to 74 destinations and 89 total routes.

However, as Wert points out, the initial fleet is a slimmed-down version of its predecessor’s. “One aircraft type they didn’t take over was the Boeing 777, which means their long-haul fleet is also significantly reduced,” he says. “Which inevitably means that ITA Airways will probably operate much fewer long-haul routes in the near future.”

Indeed, U.S.-based travelers dreaming of a getaway on ITA to the land of la dolce vita should keep in mind that options will be limited for a while. The airline plans to start offering service to New York JFK in November, but currently, navigating its website to price an Italy-bound flight is tricky (drop-down menus to select destinations are cumbersome, and the site often defaults to Italian). A search for a New York–bound flight from Italy, meanwhile, turned up a round trip, basic economy fare for around $380 in November. Enticing, to be sure, but it’s not a direct flight: It departs from Brindisi, a city in the southern tip of the country, and connects through Rome.

More U.S. cities will be added to the airline’s network starting in March 2022, eventually including Los Angeles, Washington, D.C., Miami, and others. Clearly, ITA is looking to entice budget-minded travelers by teasing special offers on its website starting at around $560 to Los Angeles, $395 to Boston, and $376 to Chicago, to name a few. However, it’s important to remember that those projections are likely to change depending on market demand and, of course, current conditions with the pandemic.

During its launch, ITA also unveiled its new sky blue livery with green, red, and white stripes—a nod to the colors of the Italian flag—on the aircraft’s tail and engines. As it ramps up service, ITA will initially operate a fleet of 52 aircraft, a number expected to increase to 78 aircraft, including 13 wide bodies, in 2022. The airline also will begin to upgrade its fleet, with a total of 81 new-generation aircraft by the end of 2025.

Those plans include commitments for at least 59 new Airbus aircraft. ITA has an agreement with Air Lease Corporation to lease 31 new-generation Airbus aircraft (including 15 A220s, two A320neos, nine A321neos, and five A330-900s). The airline will purchase the other 28 aircraft from Airbus, including seven A220 jets, 11 A320neo-family aircraft, and 10 A330neos, according to Airline Weekly.

However, rebranding is still underway. “If you’re flying on ITA Airways, you’re likely to step on a plane that says Alitalia on it,” says Wert, who was at Rome Fiumicino to catch a glimpse of ITA’s first departure from that airport. “The crews are still wearing the same uniform at the moment as Alitalia did.”

ITA also announced it will join the SkyTeam alliance, though it hasn’t yet identified its partner airline (it’s reported to be in discussions with both Delta and Lufthansa). Meanwhile, its loyalty program, Volare, (Italian for “fly”), features four levels: smart, plus, premium, and executive. As part of the program, ITA also announced a status-match campaign running through November 30, 2021.

Loyalty programs from 24 different airlines—including United, American, and Delta—are listed as eligible, and applicants must first join Volare before sending required documentation confirming their identity and current loyalty program. If approved, the assigned status will be valid for one year starting from December 31, 2021.