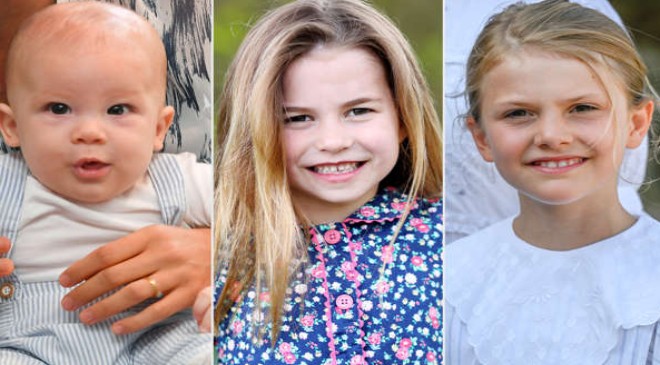 The eldest child of Prince William and Kate Middleton is third in line to the British throne, but for now he’s a regular schoolboy who loves The Lion King, spaghetti carbonara and volcanoes.

The cheeky daughter of Prince William and Kate is known for her scene-stealing habits, from playfully sticking out her tongue at her grandfather to waving at the crowds from the Buckingham Palace balcony.

The youngest of Prince William and Kate’s three children is known for his giant smile and enthusiastic wave.

Prince Harry and Meghan Markle welcomed their son in May 2019, one year after their royal wedding. Early photos of Queen Elizabeth’s great-grandson showed him taking after his dad’s signature red hair!

Princess Victoria and Prince Daniel’s children have an adorable bond, whether they’re playing with their family dog Rio or helping their mom with beekeeping.

Prince Albert and Princess Charlene’s twins are never far from each other, and their joint, themed birthday parties at the palace look straight out of any kid’s fantasy!

Peter and Autumn Phillips have two daughters who share a close bond with their cousins — Savannah has even been spotted shushing Prince George despite his status as future monarch!