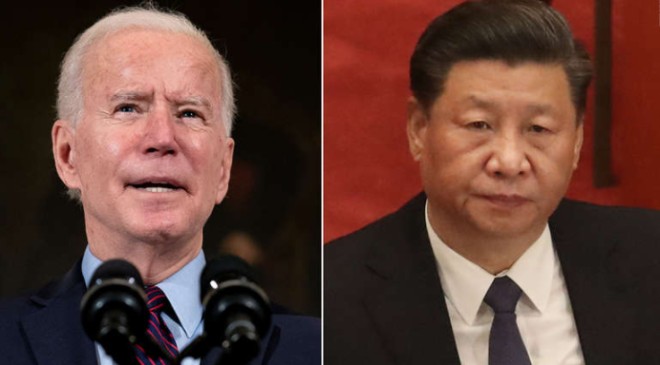 The US and China have agreed in principle that President Joe Biden and Preident Xi Jinping will hold a virtual meeting before the end of the year, part of an effort to ensure stability in one of the world’s most consequential and fraught relationships, a senior administration official said Wednesday.

The tentative agreement was one result of an extended, six-hour meeting between Biden’s national security adviser Jake Sullivan and China’s top diplomat, Yang Jiechi. The two men met in Switzerland for talks touching on areas of cooperation and disagreement as tensions between their two countries have spiked in recent days over Taiwan.

Beijing has sent record-breaking numbers of war planes into Taiwan’s airspace over the past week, prompting sharp warnings from Secretary of State Tony Blinken and other senior Biden administration officials about the potential for destabilization and miscalculation.

The central goal of the meeting, the senior administration official said, was to improve communication between the two global giants and avoid unnecessary misunderstandings, with the thinking that “this intense competition … really requires enhanced diplomacy.” The planned meeting between Biden and Xi, who developed a relationship years ago when they were vice presidents of their countries, will be a significant step toward that goal, the official said.

“We do have out of today’s conversation an agreement in principle to hold a virtual bilateral meeting between the leaders before the end of the year,” the official said, adding that details such as timing would be worked out in the coming days. “We think it’s particularly important for the leaders taking more of a role in managing this relationship and through, including through, ongoing discussion directly between the two of them.”

The official said that Wednesday’s meeting was “a productive step” toward a meeting between Xi and Biden that “would really be part of our efforts to responsibly manage competition between our two countries, hoping that it would be very much in the same spirit of the competition today, and open dialogue, honest back-and-forth.”

The official said that the tenor of Wednesday’s meeting was far removed from the fiery public exchange Sullivan and Blinken had with Yang and State Councilor Wang Yi at a March meeting in Anchorage, Alaska. After that encounter, Chinese officials accused the US delegation of being “condescending” in tone, while a US official said the Chinese officials had seemed “intent on grandstanding.”

Sullivan’s meeting with Yang was “a different tone than Anchorage, different kind of feel, in terms of the ability to go back and forth,” the official said, adding that “we thought it was really important to be able to have those conversations in private.”

The chance for the two leaders to speak privately may also have addressed US frustration about the quality of communication with Chinese officials.

Biden’s call to Xi in September was “really about ensuring that we have an open lines of communication. They really talked about the importance of having more substantive conversations than we had to date and including the need to do that in private,” the official said, adding “that’s what this meeting today was all about.”

Sullivan and Yang were able to move talks to the point where “they really evolved to genuine back-and-forth, which was quite welcome,” the official added.

The conversation between Sullivan and Yang, who met in Zurich, was “candid, it was direct, it was wide-ranging,” the official said.

Sullivan raised climate change as an area of cooperation, but stressed that the US will not accept Chinese attempts to approach the challenge as a transactional issue, or one where Washington would accept linkages between climate agreements and other issues. Sullivan “made quite clear that linking bilateral issues with these vital transnational challenges, something that we just simply don’t see as acceptable and is not the framework through which we operate,” the official said.

The US national security adviser also raised areas where the US has concerns about China’s behavior, the official said, listing human rights; Xinjiang province, where Beijing has been engaged in a campaign against ethnic Uyghurs that administration officials have said amount to genocide; tensions in the South China Sea, where China has been expanding its territorial ambitions in the contested waters; and Hong Kong, where Beijing has violated agreements with the territory to crush dissent and democracy there.

Sullivan was also “quite frank” about Taiwan, the official said. “The national security adviser made quite clear concerns we have about Beijing’s recent, you know, provocative activities, and our concerns about the continued pressure and coercion that we see by Beijing across the Strait,” the official said.

They would not characterize the Chinese response, “other than to say that all of the discussion today, including on this point, was very professional and respectful and was really about each of them having an honest exchange of views, and open exchange of views.”

Sullivan made clear the US will “continue to support Taiwan’s self-defense and we will oppose any unilateral actions to change the status quo,” the official said.

Blinken also warned China against pressuring Taiwan on Wednesday, speaking at a news conference in Paris.

“We are very concerned by the PRC’s provocative military activity near Taiwan,” Blinken told reporters. “As we said, the activity is destabilizing. It risks miscalculation and it has the potential to undermine regional peace and stability. So, we strongly urge Beijing to cease its military, diplomatic and economic pressure and coercion directed at Taiwan.”

Blinken also reiterated the US commitment to Taiwan, calling it “rock solid” and saying that the alliance “over many years, has contributed to the maintenance of peace and stability across the Taiwan Strait and within the region, and we will continue to stand with friends, with allies, to advance shared prosperity, shared security, shared values, as well as continue to deepen our ties with the Democratic Taiwan.