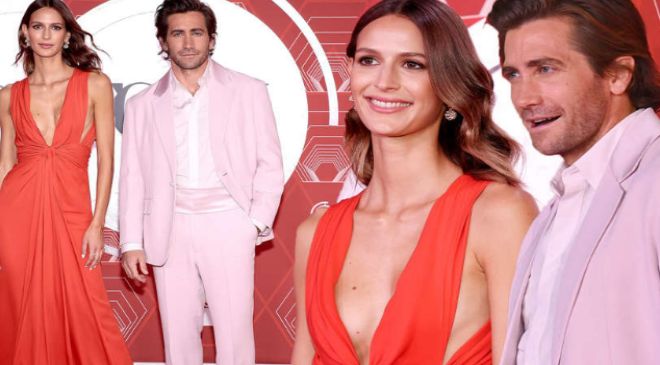 But the 40-year-old actor — who was nominated at the event — boldly walked the red carpet separate from the 25-year-old French model.

The duo first sparked romance rumors back in 2018, but have never publicly commented on their relationship.

Jake was nominated for Best Performance by an Actor in a Leading Role in a Play for Sea Wall/A Life, but lost out to The Inheritance star Andrew Burnap.

Though his play first opened in 2019, as the pandemic closed down Broadway and cancelled the 2020 event, the Tony’s honored shows from the 2019-2020 Broadway season.

Held at the Winter Garden Theatre, the Donnie Darko star was seen wearing a bold pink suit with a pink satin cummerbund and a white button down.

The Tony hopeful looked handsome as ever as he posed for solo shots and even interacted with the likes of Cyndi Lauper on the red carpet.

Cadieu — an Elite model and Columbia University student — was there in support of her boyfriend but was not seen by his side at any point.

For the occasion she wore a plunging red gown that showed off her decolletage with embellished black heels.

Jeanne and Jake were first spotted walking together in Paris in December 2018 and that following year they were photographed together in New York City.

In August 2019 Cadieu was seen supporting the actor at the opening of his play — his third Broadway role on Broadway.

That same month a Page Six insider reported that she had met Gyllenhaal’s family and that they had taken a vacation to Martha’s Vineyard.

A month prior he had said on Sunday TODAY that he desired to start a family eventually. ‘I do hope to be a father one day,’ he told host Willie Geist.

Though he has enjoyed previously high profile relationships with the likes of Kirsten Dunst, Reese Witherspoon and Taylor Swift he had spoken about the importance of keeping his personal life underwraps.

‘I consider intimacy to be very important and I don’t think everybody needs to know about my family or my personal details,’ he told The Guardian in 2017. ‘I think when you’re in a relationship, you are constantly scrutinised…I would love to not talk about my personal life.’