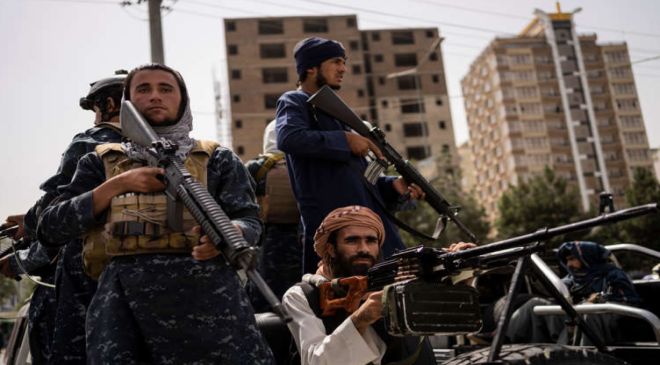 BEIJING — China says it will host a virtual meeting of Central and South Asian state leaders to discuss the situation in Afghanistan.

The meeting of members of the China and Russia dominated Shanghai Cooperation Organization is scheduled for Thursday. Afghanistan is an observer member of the grouping, but it wasn’t clear if any representatives from the Taliban leadership would be attending.

China hasn’t said whether it will recognize the new Afghan authorities who have excluded outside parties and women, although it has courted its leadership and kept its Kabul Embassy open.

The government and state media have accused the United States of destabilizing Afghanistan through what it calls a hasty and chaotic withdrawal of its troops, even as the Taliban swiftly overcame Afghan government forces over recent weeks.

China has used the Shanghai Cooperation to boost its standing in Central Asia through political dialogue and joint military exercises, aimed largely at diminishing U.S. influence in the region.

Beijing has also called on the Taliban to hold to its pledge to restrain militants seeking independence for the traditionally Muslim northwestern region of Xinjiang, Foreign Minister Wang Yi has urged the group to keep border crossings open, while offering $31 million in humanitarian assistance, along with 3 million doses of Chinese-made COVID-19

HERE’S WHAT ELSE IS HAPPENING:

KANDAHAR, Afghanistan — Impoverished Afghans living in a long-abandoned military compound in the southern city of Kandahar say they’re devastated by the Taliban order to expel them from their homes.

Several hundred staged a rally against the order on Monday, saying they have nowhere else to go and that they had years ago paid former Afghan soldiers under the table for the land.

The Taliban came to the compound after the rally and forced several of the protesters to leave. Their current whereabouts are not known.

Rabia, an Afghan widow who goes by one name, says she lives in a two-room mud house in the compound with her five children. She told The Associated Press she will stay put until the Taliban provide her with another place to live.

“The Taliban want me to leave everything I built and bought behind, where would I go with my children?” she said.

The Taliban have ordered over 2,500 families in the compound to leave their houses and all their belongings so that Taliban fighters can move in.

“The families have received a deadline to leave with just the clothes on our back as soon as possible” said Imran, another resident of the compound.

Fazil Mohammad, one of the first Afghans who settled in the compound said has no money to go somewhere else. “I cannot even afford a tent now to move into that.” He said he was happy when the Taliban took over, citing corruption of the previous government, but that he is now disappointed.

The compound was abandoned in 2001, after the U.S.-led invasion to oust the Taliban, when Afghan soldiers who lived there moved into facilities at the Kandahar airport. Over the years, the compound grew as displaced Afghans settled there, bought pieces of land and built houses.

The Taliban media chief for Kandahar, Rahmatullah Naraiwal, said Wednesday that the Afghan families may continue living in the compound, pending a review of the matter by the Taliban leadership.

However, he said they are not allowed to hold rallies and that their protest was illegal. The Taliban are prepared to pay them but cannot provide them with an alternative place to stay, he added.