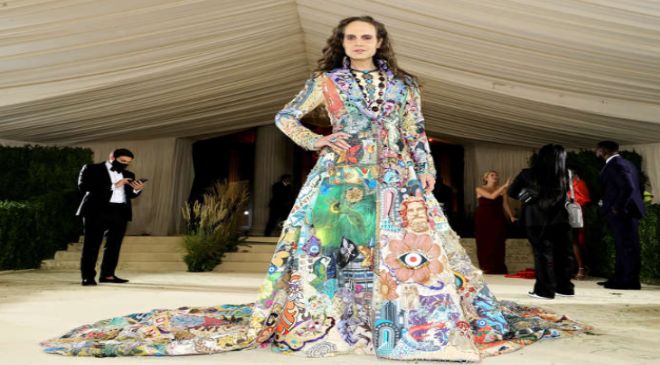 Jordan Roth brought art to life on the Met Gala’s red carpet in a custom coat of many colors by Michael Sylvan Robinson, a textile artist and queer activist. The theater producer describes this specially commissioned piece, a sort of mobile canvas, a “visual manifestation” of his thinking on the expansive possibilities of identity; ruminations that were spurred by the theme of “In America: A Lexicon of Fashion.”

“When I knew what the exhibition would be exploring, I immediately went to the idea of identity, and how for me identity is a construction, just as a garment is a construction,” Roth continues.“So often our identities feel like they are essential facts about ourselves, as opposed to things that we take on, and in some cases, things that are projected on us by others that ultimately kind of fuse and feel as though that is who or what I am. And I’m very interested in the notion that that is not true, that we, when I, begin to allow for the possibility that that might not be true, I begin to see how I might wear this thing we call our identity more loosely, and perhaps even shed it or change it, or relate to it as I might a piece of clothing that is expressive of who I am, but is not who I am.”

Another way to put this might be to say that there are infinite ways to fashion who we are. Identity, asserts Roth, “is a concept that we are in constant conversation with; a thing that we are making and unmaking in a sort of dance.”

The various dimensions of the embellishments create a sort of rhythm on the shaped coat with a train that, says Robinson, folds like peacock wings. Entirely handmade, this piece was about a year in the making; Vogue’s Michael Philouze connected Roth and Robinson last spring. The final execution was done in far less time: The gold fabric that forms the base of the coat was delivered on August 7th. Onto that fabric Robinson printed photos, some of which he took on his first visit to the Met (where he had worked as a young man) post-lockdown. These were then embellished and over embellished with sequins, and scraps of fabric, some precious, some not. Robinson says to him the coat engages in today’s conversation about American identity, but also manages to turn those “challenges of difference and variedness into kind of a collage, a tapestry, a kaleidoscope of experience.”

Nestled among the snippets of text and Botticelli faces, the classical busts and butterflies, are many eyes, which give the coat a talismanic aspect. “I thought of those as witnesses, but also symbols of protection as well,” explains the artist, who thinks of this work as a kind of wearable art. “I come out of the queer activism of the nineties,” says Robinson, so “that idea of using clothing to share words or images to be evocative is definitely one of the places that my work comes out of. And I also am a collector of all kinds of prints, fabrics and textiles, so it’s kind of like queer activism meets decorative arts meets fashion meet street art [meets art history].” What better place for all of those elements to come together than at the Metropolitan Museum of Art?