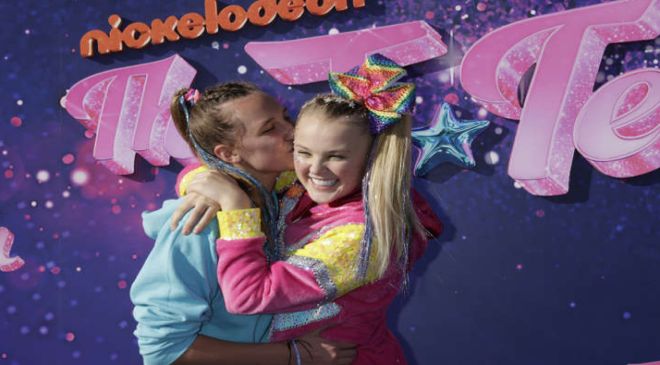 Pop star and television personality JoJo Siwa and girlfriend Kylie Prew are putting their romance in the spotlight.

The two love birds stepped out on the red carpet for the premiere of Siwa’s new film, “The J Team” in Pasadena, California on Friday marking the first time the couple has made am official public appearance together.

Rocking a multicolored onesie and her signature high ponytail secured in a colorful bow, Siwa, 18, was captured sharing a kiss with Prew, also 18, during the event promoting Siwa’s new Paramount+ film about a young dancer kicked out of her dance troupe on a quest to rediscover what dancing means to her.

Siwa stars in the film and serves as its executive producer.

The former “Dance Moms” star made headlines earlier this year when she came out as a member of the LGBTQ community first by posting a TikTok video of herself dancing to Lady Gaga’s “Born This Way,” which caused some speculation. A few days later, she seemingly confirmed that news when she shared a gift her cousin gave her, a t-shirt that read, “Best. Gay. Cousin. Ever.”

Siwa and Prew began officially dating earlier this year, although they had been friends prior to the beginning of their relationship.

In a recent interview with TODAY, the “I Can Make U Dance” singer said she is still figuring out how she identifies within the LGBTQ community.

“I’m dating a girl; that can make me a lesbian,” she said. “I’ve never really been in love with anybody or found attraction to anybody except for Kylie and so therefore it could be demisexual”

She continued, “I’ve never minded who I would be with, if it would be a girl, a boy, (someone) trans,” she said. “But then I also think, so that could be pansexual… The l-word isn’t my favorite word but I like the q-word. I like queer, it’s kind of… I am who I am. But I’m not like, ‘Oh my God. No, I’m not this, you know what I mean?”

Siwa is set to star on the 30th season of “Dancing With the Stars” on September 20th, becoming the first contestant ever in the American franchise of the reality competition series to be paired with a professional dancer of the same sex.