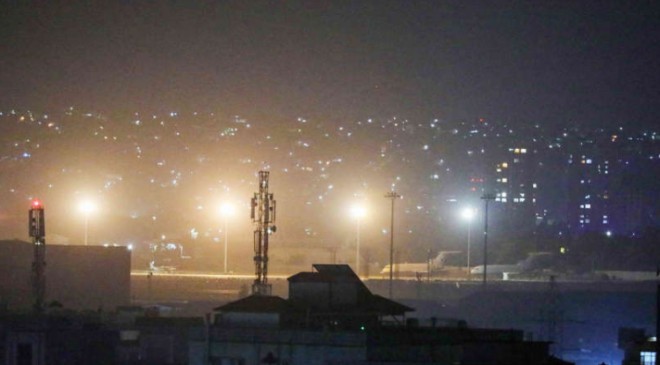 WASHINGTON – The final U.S. troops in Afghanistan flew out of Kabul Monday at 3:29 p.m. EDT, ending a costly 20-year occupation that started after the 9/11 terrorist attacks and leaving a war-torn country now run by the Taliban.

The retreat, announced by the Pentagon, came one minute before Aug. 31 Kabul time, keeping the U.S. in the country right up until a deadline set by President Joe Biden’s administration.

Now, our 20-year military presence in Afghanistan has ended,” Biden said in a statement, calling it the “unanimous recommendation of the Joint Chiefs and of all of our commanders on the ground to end our airlift mission as planned.”

In their view, the president said, ending U.S. presence was the “best way” to protect the lives of troops and secure Afghan civilian departures in the weeks and months ahead.

The pullout capped a chaotic withdrawal of U.S. troops that was upended after the Taliban quickly took over the Afghan government this month. It turned deadly when a  terrorist attack killed 13 U.S. service members and more than 160 Afghan civilians on Thursday as the U.S. scrambled to evacuate Americans and Afghan allies in the final days.

“Tonight’s withdrawal signifies both the end of the military component of the evacuation, but also the end of the nearly 20-year mission that began in Afghanistan shortly after September 11, 2001,” said Maj. Gen. Kenneth McKenzie Jr.

Yet while Mckenzie said the “voluntary evacuation is complete,” he said the “diplomatic mission” will continue to ensure that remaining U.S. citizens and eligible Afghans can leave if they choose. Secretary of State Antony Blinken will oversee these diplomatic efforts.

Biden plans to address the nation about the completed withdrawal Tuesday afternoon.

More than 123,000 people have been flown out of Afghanistan since Aug. 14, including about 6,000 Americans, said Blinken, who called diplomacy the “next chapter” in U.S. engagement in Afghanistan. He said a “small number” of Americans – under 200, likely closer to 100 – remain in Afghanistan. The U.S. is trying to determine exactly how many.

“Our commitment to them, and to all Americans in Afghanistan, and everywhere in the world continues,” Blinken said. “We will help them leave.”

Biden has vowed that all Americans who wanted to leave the country would be able to – even beyond the military withdrawal – but the White House said some might not choose to leave. Blinken said part of the challenge in pinpointing a precise number is that some remaining Americans are longtime residents of Afghanistan with American passports unsure about leaving. Others have deep roots and families in Afghanistan and face a “painful choice,” he said.

The U.S. toll for the war is more than 2,400 troops killed, including the 13 who died last week as they helped Afghans and Americans flee the oppressive rule of the Taliban. The two-decade failed attempt at building a stable, secure democracy in the country cost $2 trillion by some estimates. The war continued 10 more years after the 2011 killing of Osama bin Laden, the head of al-Qaida and mastermind of the 9/11 attacks.

The terrorist network ISIS-K, an Islamic State offshoot and enemy of the Taliban, maintains a presence in Afghanistan, although the Biden administration has said it does not pose a threat to the U.S. homeland.

McKenzie, who leads U.S. Central Command and oversaw the war effort there in its final months, estimated there are 2,000 “hardcore ISIS fighters in Afghanistan now,” many of whom were released from prisons by the Taliban but who will now pose a threat to the Taliban’s rule.

He said no American citizens were on the last jets to leave, although “we continued the outreach and would have been prepared to bring them on until the very last minute.”

“No words from me could possibly capture the full measure of sacrifices and accomplishments of those who serve, nor the emotions they’re feeling at this moment, but I will say that I’m proud that both my son and I have been a part of it.”

Who, and what, was left behind

It’s not clear who or how many people were on the final flight out. The Pentagon has kept a tight lid on the ever-dwindling number of American service members in Afghanistan out of concerns for their safety, along with U.S. diplomats who remained in the country.

McKenzie said “the situation” wouldn’t allow the U.S. to evacuate everyone who wanted to leave.

Aircraft, including Apache attack helicopters, would likely have to be destroyed by an airstrike, according to a defense official who was not authorized to speak publicly.  Radios and other sensitive equipment would be burned up by incendiary hand grenades that can cut through steel.

The collapse of the U.S.-supported Afghan government on Aug. 14 stunned the Pentagon and White House. The administration had planned to guard the U.S. Embassy and airport with about 600 troops. But the Taliban’s onslaught, which toppled provincial governments over the summer with relatively few shots fired by Afghan security forces, left Kabul surrounded.

President Ashraf Ghani fled, and the Taliban, nearly 20 years after their ouster, had regained control of the country. U.S. military officials were forced to negotiate with their bitter enemy for safe passage during the retreat.

Biden has faced widespread criticism over his handling of the withdrawal as the images of chaos at the Kabul airport undercut his pledge to restore competence in the White House. Republicans on Monday argued that the reemergence of a Taliban-led government and threat of ISIS-K has left America unsafe.

“You don’t end wars by surrendering,” Rep. Lynn Cheney, R-Wy., said on Twitter. “You don’t secure America by leaving Americans behind enemy lines, betraying our allies, and empowering our enemies. This isn’t ending a war. It’s losing on.”

Now that the withdrawal is complete, refugee groups, experts and advocates are bracing for a refugee crisis and economic calamity.

“Worst-case scenario is we will have a massive humanitarian disaster,” starting with the summary execution of Afghans who worked for the U.S. government or on behalf of its ideals, said Brett Bruen, a former foreign service officer who worked on global engagement in the Obama administration.

Women and girls will likely be trying to flee the country in droves, despite the Taliban’s pledges to rule with a more moderate hand. When the militant Islamic group last ruled the country, its leaders barred girls from attending school and prohibited women from working outside the home. Appearing in public without a male relative was illegal.

Tanya Henderson, founder and executive director of Mina’s List, which is dedicated to women’s equal representation in government around the world and has been helping the Afghanistan evacuation, said many Afghans had been racing the clock to flee ahead of the withdrawal deadline.

“However, many are also making preparations in case they do not make it out before U.S. forces leave,” Henderson said. “This includes exploring land routes and other options, which are often dangerous and uncertain.”

Mina’s List and other groups say they intend to keep working to help vulnerable Afghans escape even after the American withdrawal, although it will be increasingly difficult and dangerous.

Amed Khan, a human rights activist and philanthropist who was in Kabul trying to evacuate as many at-risk Afghans as possible over the last several weeks, said the level of desperation in the country is “off the charts,” and he doesn’t know how it could get any worse.

“If we were to make a list of the 2,000 most important Afghans who risked their lives working with the U.S. over the last 20 years, the majority of them are still in Afghanistan,” he said.

“Nobody should take their foot off the gas or feel comfortable thinking we’ve evacuated everyone” at risk of being persecuted by the Taliban. “I’m ready to go right back,” Khan said.

He does not expect the Taliban to be restrained once American troops are gone.

“Nothing good is going to happen on Wednesday,” said Khan, who is based in New York and left Kabul recently on an evacuation flight he helped to arrange. “They have hung people over the last two weeks. Logic would dictate they would continue to hang people.”