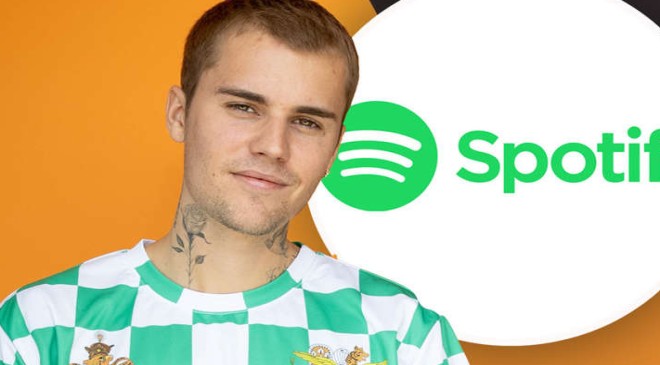 Justin Bieber has become Spotify’s most streamed artist of all time with an average of more than 83.3 million monthly listeners, according to TMZ.

The success of his new album Justice, released in March, and single with The Kid LAROI, Stay, which has remained on Billboard’s top spot for six consecutive weeks, helped bump up his numbers on the platform.

The 27-year-old pop star’s averages 8.8 million more listeners than The Weeknd, who came in second with 74.5 million.

At the time, the 19-year-old singer-songwriter beat out Taylor Swift and Grande for the top spot with 49,736,031 monthly listeners.

Miraculously, Eilish was able to rake in the most Spotify streams for a female artist without even releasing an album in 2020.

The singer’s debut album When We All Fall Asleep, Where Do We Go? was released in March of 2019 and helped make her a household name, following the success of her single Bad Guy.

Despite not adding another album to her discography, Billie did premiere three brand new tracks throughout the year, including No Time To Die which the singer wrote for the upcoming James Bond film of the same name.

In July 2019, Eilish released a remix of her track Bad Guy with Bieber.

Earlier this year, she called Bieber ‘the sweetest baby ever’ on SiriusXM’s The Morning Mashup.

Justin, a veteran in the world of entertainment, has even helped Billie navigate the spotlight.

He’s a good friend of mine. He has been so helpful for me, in terms of just, like, dealing with fame,’ Billie continued.

She added: ‘He’ll call me sometimes and just say stuff that makes me just feel heard and like there’s somebody else that goes through the same stuff. So it’s really nice to have him.’

Certainly Billie has been listening to his advice as she finds herself back in the spotlight, with the release of her new studio album, Happier Than Ever.