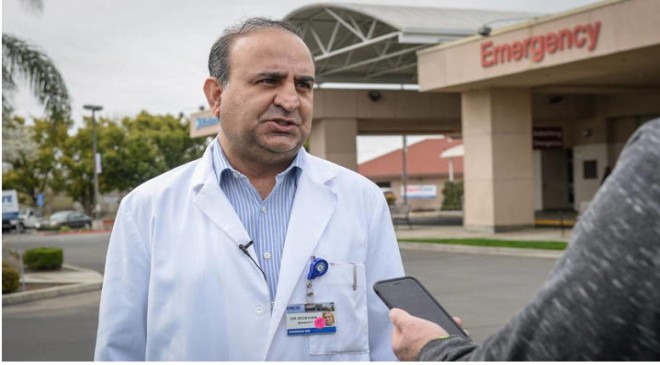 At full strength, Madera Community Hospital used to employ as many as 700 people, from nurses, respiratory and radiation technicians and orderlies to security, janitorial, clerical and bookkeeping staff.

But as of Jan. 3, when the financially distressed non-profit hospital expects to file for Chapter 11 bankruptcy and close its doors to new patients, only a skeleton crew will remain on hand to wrap up a raft of post-closure loose ends, said Robert Poythress, a member of the independent hospital’s board of directors.

In an official announcement Friday, hospital CEO Karen Paolinelli said the hospital will file for bankruptcy just after midnight on Jan. 3, and services in the emergency room and the obstetrics, outpatient and surgery departments will close at that time. Any remaining hospitalized inpatient cases in the hospital will be transferred to other facilities by Jan. 17 if they have not already been discharged.

The hospital posted a notice of closure on the home page of its website Friday afternoon.

Additionally, three rural health clinics owned by the hospital — in Madera, Chowchilla and Mendota — will close on Jan. 10.

“It’s awful. It’s such sad and terrible news, and it’s surreal,” said Poythress, a Madera native and member of the Madera County Board of Supervisors as well as serving on the hospital’s board. “This is the community I grew up in.”

But for more than a decade, the hospital has suffered from a sustained decline in the number of patients using the facility. Patient discharges shrank almost every year between 2011 and 2021, according to data from the National Academy for State Health Planning. That, Poythress said, is the result of local doctors in Madera referring more and more patients to hospitals in Fresno.

Like many other rural hospitals, a significant share of Madera Community Hospital’s patients rely on Medicaid, a federal health program for low-income residents. Over the past decade, Medicaid patients have accounted for between 42% and 51% of the hospital’s clients.

Because of low Medicaid reimbursement rates that fall short of what it costs to care for Medicaid patients, the NASHP database reflects that Madera Community Hospital’s annual losses on Medicaid services since 2013 have ranged from more than $8.3 million to as high as 16.7 million.

Madera Community Hospital is the only general acute-care hospital in Madera County serving a population of up to 150,000 residents not only from the cities of Madera and Chowchilla, but also from more remote reaches of the county, including the Sierra foothills to the east and rural Fresno County farming towns including Firebaugh and Mendota.

Valley Children’s Hospital is also in Madera County, just north of Fresno, but it is a pediatric facility and does not serve the general adult population. Once Madera Community Hospital closes, the next nearest hospital for most Madera County residents will be Saint Agnes Medical Center in north Fresno or Community Regional Medical Center in downtown Fresno — both about a 23-mile drive from the Madera hospital.

As a growing number of nurses retired or left the profession since 2020 amid the ongoing coronavirus pandemic, many hospitals across the central San Joaquin Valley, including Madera Community, were forced to rely on more expensive travel nurses to fill the void.

“That’s what tanked the hospital so quickly,” Poythress said. “Prior to that we were already not doing so well.”

“When you combine (the low Medicaid and Medicare reimbursement rates) and our costs for travel nurses, it’s just a death knell,” he added.

A proposed sale of the Madera hospital to Saint Agnes Medical Center and its Michigan-based parent, Trinity Health, had been in the works for months, but required regulatory approval from the California Attorney General’s Office. Attorney General Rob Bonta gave conditional approval to the agreement last week, but included additional requirements of Saint Agnes and Trinity.

On Thursday, Saint Agnes and Trinity Health announced that after reviewing the conditions that Bonta placed on the transaction, they were backing out of the deal.

“Trinity Health, Saint Agnes and Madera entered into this process with every intention of reaching a positive outcome,” Saint Agnes President and CEO Nancy Hollingsworth said in a statement to The Bee Thursday. “Unfortunately, given the complex circumstances and the additional conditions imposed by the AG … it became clear we could not move forward.”

“Therefore, the difficult decision was made to terminate the agreement so Madera could begin making plans for its next steps,” Hollingsworth added.

Saint Agnes officials did not indicate what specific conditions prompted them to reconsider the deal.

Bonta’s office issued a statement Friday in response to what he described as a decision by Saint Agnes and Trinity Health “to callously walk away” from the merger.

“I am deeply disappointed that Trinity Health has chosen to leave vulnerable communities in need …,” Bonta said. “The minimal conditions we set on the sale would have kept the hospital’s services affordable and accessible, and prioritized people’s health and safety.”

Poythress said he understood the position of Saint Agnes and Trinity, who he said were the only parties who would even engage in talks with Madera Community Hospital to provide some kind of lifeline to keep the hospital open. From the start of seeking Bonta’s regulatory approval, Poythress said Saint Agnes had set forth to the attorney general the conditions under which it felt it could go through with the purchase.

“I see their point and the need to maybe make some changes or reduce services here or there,” Poythress said. “No one expects someone to continue to operate a hospital at a loss.”

“I think it’s better to have half or three-quarters of a hospital” that is open even with reduced services “than to have nothing,” he added.

But if Madera Community follows through on its announced bankruptcy filing and closure, “nothing” is precisely the level of hospital services that will be available to residents. And that, Poythress said, represents just one of what he believes will be the unintended consequences of the added conditions that Bonta put on the sale.

“We have a lot of indigenous people from Central America who live here, and many of them walk to the hospital for services. They’re not going to be able to walk to Fresno,” Poythress said. “We have about five to eight 5150s (the state’s code for people suffering from mental health issues who are involuntarily hospitalized because they pose a threat to themselves or others) per day, and they will have to be transported to Fresno now.”

Fire departments in Madera, Chowchilla and Madera County will have to establish new emergency procedures, and ambulances will have to transport patients to Fresno, where hospital emergency rooms are already overrun by patients suffering from COVID-19, flu and other respiratory infections.

“These are kind of these exponential things that link out of these issues,” Poythress said. “The people who need this hospital the most and who are the most needy are the ones who will be denied health care.”

Poythress said that Camarena Health, which is not affiliated with Madera Community, will continue to operate its health clinics within the county in Madera, Chowchilla, Coarsegold and Oakhurst, “and they do a fantastic job.”

In neighboring Fresno County, officials with the Fresno County Department of Public Health said “we will assist Madera County in every way we can” and will work with health care systems throughout the central San Joaquin Valley to ensure the availability of medical services.

“Our hearts are broken by this news, but we are committed to ensuring that our community and region have access to quality medical care,” said Dr. Rais Vohra, interim health officer with the Fresno County Department of Public Health. “We are here to support all of our medical partners and help them navigate this transition.”

The Fresno County agency said it is working with hospitals across the region “to ensure they are able to accommodate any additional patients who may need their services” in the wake of the impending Madera hospital closure.