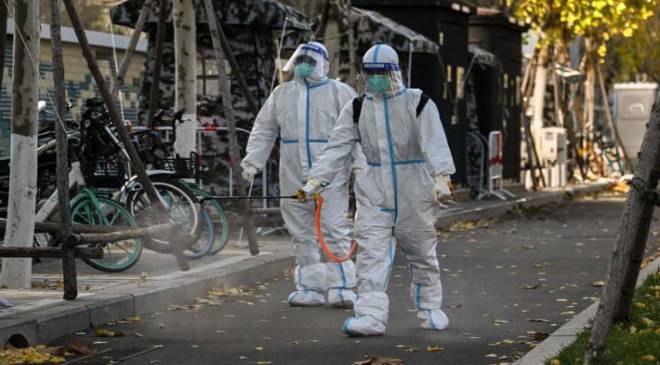 As one country after another succumbed to outbreaks this year, China kept the coronavirus at bay, buying valuable time to prepare for the inevitable: a variant of the virus so shifty and contagious that China, too, would struggle to contain it.

But rather than laying the groundwork for that scenario, China stepped up its commitment to “zero Covid,” deploying snap lockdowns and contact tracing.

In the meantime, daily vaccinations fell to record lows. Critical-care beds remained in short supply, even as workers built testing booths and isolation facilities. Research on homegrown mRNA vaccines failed to keep up with the fast-mutating virus.

Now, the costs of that approach are piling up, putting China in a bind from which there appears to be no easy escape, scientists said in interviews.

Even as new Covid cases have reached all-time highs, residents have taken to the streets to protest lockdowns that have ground daily life to a halt in many cities. Alarmed, officials have begun easing restrictions.

Researchers worry that China may struggle to reopen the country and relieve the strain on its economy without risking a tide of deaths. Such a catastrophic surge could pose a significant threat to the political leadership.

“We often pretend that China has a choice in terms of ‘zero Covid’ versus opening up,” said Dr. Siddharth Sridhar, a virologist at the University of Hong Kong. “There never was a choice. The simple fact is that China is not ready for a wave on that scale.”

Nothing has set back China’s preparations as extensively as its difficulty in vaccinating older people. Two-thirds of people ages 80 and older are vaccinated, but only 40 percent have received a booster dose, a critical shortcoming because Chinese-made vaccines offer weaker protection than the Pfizer-BioNTech and Moderna vaccines.

Those results have cemented an impression among scientists that the Chinese shots, which rely on killed viruses to prompt an immune response, are effectively a three-dose, rather than a two-dose, vaccine.

Making matters more difficult, China’s last major vaccination push was in the spring, an interval of eight months or more since the last dose for many recipients.

The Chinese vaccines stack up relatively well against the world’s other non-mRNA Covid shots, said Dr. Paul Hunter, an infectious disease specialist at the University of East Anglia in England. But reopening the country so long after the last vaccination campaign could be damaging.

“I think that’s more of an issue than the quality” of China’s vaccines, Dr. Hunter said.

The vaccination gaps in China’s older population are all the more glaring because the country has achieved relatively strong coverage overall. Nearly 90 percent of the population has received a primary vaccine series, generally comprising two doses of Sinovac or Sinopharm, another Chinese-made shot.

The disparity results in part from an outdated theory that so long as younger and more active Chinese were immunized, the country could establish a sort of herd immunity and protect older people, said Andy Chen, a Shanghai-based analyst at Trivium, a consulting firm.

Older people in China often avoid health risks, Mr. Chen said, and so the chances of even minor vaccine side effects may have seemed threatening to many. China’s reluctance to provide data on the efficacy and side effects of its vaccines created a vacuum in which those worries flourished, other experts said. Misinformation about side effects spread on Chinese social media.

And while health officials have encouraged older adults with chronic illnesses to get shots, vaccinators are often reluctant to administer them without access to the medical histories of more vulnerable recipients.

The “zero Covid” strategy only complicated the vaccination drive. By limiting infections, it saved lives but also eroded many older people’s sense of urgency about the need for a shot.

An emphasis on swabbing throats instead of administering shots drew further attention from the vaccination campaign. In the aftermath of a springtime surge, China erected tens of thousands of testing booths in cities like Shanghai and Beijing and built huge facilities to isolate millions. The vaccination rate stagnated.

“There is always a shortage of staff members in the health care system,” said Xi Chen, an associate professor of public health at Yale University. “People told me at the time they were told to focus on mass testing.”

China said this week that it would renew efforts to vaccinate its oldest citizens, announcing measures to use mobile vaccination stations, bring shots into nursing homes and go door-to-door to reach the most vulnerable, according to a statement from the country’s National Health Commission.

But some experts, like Yanzhong Huang, a global health specialist and a senior fellow at the Council on Foreign Relations, expressed skepticism that the move was much more than lip service.

“It is about tinkering with the current approach,” he said. “But that approach fundamentally doesn’t make any sense from a public health policy perspective anymore.”

The authorities did not provide a detailed plan for the new efforts and stopped short of mandating vaccinations. As powerful as the country’s leadership is, forcing older people to get shots is seen as a potential overreach, experts said, bringing with it the risk of a public backlash.

“From a local government official’s perspective, if even just one person dies from the adverse effects of vaccines, that’s blood on your hands,” said Mr. Chen, the Trivium analyst. “It’s really hard to recover from that.”

If cases keep climbing, gaps in vaccine coverage could pile more pressure on hospitals that may also need to confront a winter cold and flu season. China has fewer intensive care beds per capita than many other Asian countries.

The country once dealt with shortages of doctors and nurses, especially in rural areas, by moving health workers from one province to another when the virus flared up. A nationwide torrent of Omicron infections would make that impossible.

A study from Shanghai’s Fudan University in May warned of a “tsunami” of Covid cases and roughly 1.6 million deaths if China abandoned its “zero Covid” policy. China has since acquired more options for antiviral treatments. But its hospital capacity is limited enough that a sudden lifting of “zero Covid” restrictions would still create a health crisis, said Ben Cowling, a professor of epidemiology at the University of Hong Kong.

Given the inevitability that cases will surge whenever China reopens, Yang Yang, an associate professor of biostatistics at the University of Florida, said that efforts “to prepare the medical system” were a priority. Already there are some signs that the leadership is shifting focus from building quarantine facilities to fortifying its best hospitals, he added.

China’s floundering retreat from the emergency phase of the pandemic contrasts with the exits made by places like New Zealand and Taiwan. There, lockdowns brought breathing room while the population was being vaccinated; when the measures were lifted, deaths surged, but to levels far lower than in countries like the United States.

China’s strategy so far has limited Covid deaths, too, scientists said, but without also mapping an exit from restrictions.

“Restrictions and lockdowns can help buy time to get crucial public health measures in place and save lives, but they are not an exit strategy by themselves,” said Jeremy Farrar, the director of Wellcome, a global health foundation.

China, which has spurned the Pfizer and Moderna vaccines, appears to be leaning on hopes for locally made mRNA alternatives. Government scientists have been running a head-to-head trial of more than a dozen new vaccine candidates, including some mRNA doses, experts said.

Public data is sparse, but Indonesia recently authorized China’s mRNA shot, and some vaccine makers appear to be moving closer to seeking authorization from Chinese officials.

“The formulation of getting an mRNA vaccine correct might have taken a few shots on goal, but early data suggests it’s heading in the right direction,” said James Bellush, a medical science expert at RTW Investments in New York.

China’s top leadership has signaled a recognition that its blanket approach to controlling the virus is taking an increasingly large economic and social toll, calling for measures to adjust what has been a “one-size-fits-all” approach. In recent days, several cities have loosened some of their harshest restrictions following a wave of mass protests.

On Friday, health officials in Guangzhou in southern China published a guide on medicines to help relieve Covid symptoms, a sign that the city may be preparing to help residents cope with the virus instead of trying to stamp out every infection. Another city, Tianjin, fully reopened its subway system and announced that riders would no longer be required to show a negative PCR test result in the preceding 72 hours.

But there still seemed to be some debate about whether backing down from Covid restrictions was the right approach. In the northeastern city of Jinzhou, in China’s Liaoning province, officials said that they had already begun to loosen some measures but still pushed back on deserting the “zero Covid” strategy.

“There’s no need for us to abandon our defenses when we can reach zero, avoiding large-scale infections,” officials said.