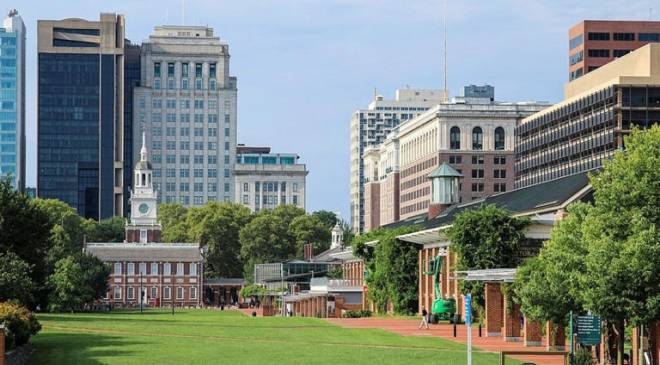 The City of Brotherly Love, as Philadelphia is known, has several attractions that travel the gamut from history, heritage, and culture—all the way to nature, adventure, and entertainment. However, it is as a place of America’s history and heritage that Philadelphia may, in vain, look for a peer or a rival. This is because Philadelphia is the birthplace of the American Republic. It’s where America was born. For those who are interested in the intrigues and drama that would birth the famed Land of the Free and Home of the Brave, Philadelphia is hands-down the place to head to.

Yet while the city boasts several places and buildings of historical interest, there’s a section of the city that seems to gobble up most of the historical sites. This is where the historical attractions are most concentrated. Known as the Independence Mall, this is America’s most historic square mile, and it is well worth checking out.

It’s simple. The reason Philadelphia’s Independence Mall is the most historic place in the United States as measured by square mile is that nowhere else in the country is there such a wide collection of buildings—and of such extraordinary historical value—as those within the area in Philadelphia identified as Independence Mall. For clarity, this is not a large area. A square mile is just about 640 acres. Ordinarily, it will take a person walking in a relaxed manner just about 20 or 30 minutes to cover a square mile. Considering the number of buildings of historical interest in such a small area, Philadelphia’s Independence Mall is a gem. To paraphrase the words of Winston Churchill (and tweak them a little), “Never in the field of human conflict was so much owed by so many to so small a space of brown earth.”

For clarity, Independence Mall is a small section of the Independence National Historic Park, which stretches for only three blocks. But in this tiny, three-block section are Independence Hall and the Liberty Bell. Inside the Independence Hall are enduring documents such as the celebrated trio of the Articles of Confederation, the Constitution of the United States, and of course, the Declaration of Independence. More than all others, these are the documents that birthed a new country in a new world and established the basis of what Lincoln would describe as an “Experiment.” It was an experiment in a secular democracy. Today, one can with awe read these venerated documents, albeit copies, and even see the silver inkstand that, according to tradition, was used during the signing of the Declaration. There’s also the Assembly Room, the exact place where these documents were signed.

And engraved with the words “Proclaim LIBERTY Throughout All the Land Unto All the Inhabitants thereof,” the Liberty Bell, now at the Liberty Bell Center, was the rallying cry for abolitionists and would provide them with ideological inspiration.

Other Things To See In Independence Mall

Aside from the Independence Hall and the Liberty Bell, visitors to this three-block stretch will also be excited to step into such historic buildings as the National Constitution Center, the Free Quaker Meetinghouse, and the Congress Hall. Concerning these three, the National Constitution Center is an interactive museum teaching visitors about the history and meaning of the United States Constitution. The Free Quaker Meetinghouse was a structure that “rebel” members of the Quaker denomination constructed as a place of religious worship. These members defied their church’s pacifist stance and took up arms to fight in the Revolutionary War. And Congress Hal, which was hitherto a courthouse, served as the first meeting place for the United States Congress from 1790-1800.

Other buildings in the Independence Mall that will excite history buffs include the Old City Hall, the location of the United States Supreme Court from 1791-1800; the Carpenters Hall, where the First Continental Congress was held in 1774, and the Second Bank of the United States which was among the first centralized banks in the country. Lastly, the Independence Mall is not just concrete slabs after concrete slabs. Visitors will be excited to stroll through the gardens and green walks that form part of this feast of history.

With regard to location, Independence Mall lies directly north of Independence Hall and south of the National Constitution Center. Circumscribed by Chestnut, Race, 5th, and 6th Streets, the Philadelphia Visitor Center describes it as home to free speech, special events, and public programming.