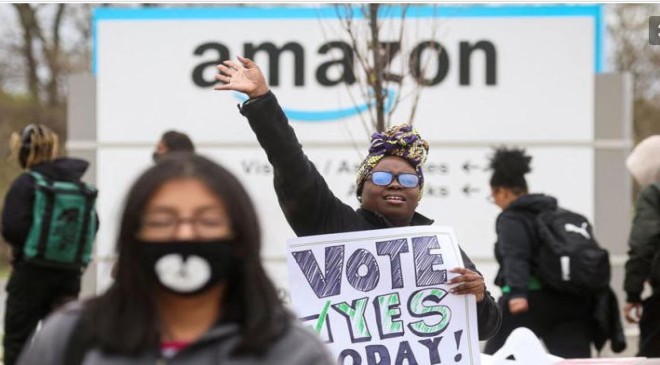 Amazon will be forced to read out a public notice this week to all employees at a warehouse in Staten Island, New York, where workers won the first Amazon union election, stating it will “cease and desist” from retaliating against people involved in union organizing.

US district judge Diane Gujarati ruled on 18 November that Amazon cease and desist from retaliating against workers for organizing in the workplace, in response to Amazon employee Gerald Bryson’s termination in April 2020. She included in her ruling that Amazon read out publicly her 30-page decision to employees, which is set to be conducted on Thursday 1 December.

While the order does not reinstate Bryson, Amazon could be held in contempt of court if found to be violating the order.

“The judge’s order in this case recognizes Amazon’s unlawful conduct and provides the full force of a federal court injunction to prohibit Amazon from further discharging employees for engaging in protected concerted activity,” Teresa Poor, the regional director of the Brooklyn office of the National Labor Relations Board (NLRB), said in a statement.

“This relief is critical to ensure that Amazon employees everywhere can fully and freely exercise their rights to join together and improve their working conditions, including by forming, assisting, or joining a union.”

Amazon’s Staten Island warehouse, known as JFK8, became the first to pass a union vote in April. The company has since defeated attempts to unionize other warehouses.

The public reading to workers of the court order comes as Amazon Labor Union is organizing a public protest on Wednesday, outside of a public appearance by Amazon chief executive Andy Jassy at the New York Times’ Dealbook Summit event in Manhattan.

“If Jassy comes to New York he should come to bargain a contract with Amazon workers, not bluster or practice union-busting,” Amazon Labor Union president Chris Smalls said in a statement. “It’s time that Amazon and the company’s CEO respect the rights of workers and join ALU in improving working conditions, rather than acting as an uncaring, BS-spouting, corporate law-breaker.”

Amazon has aggressively opposed unionization efforts within its warehouses, fending off union elections in Bessemer, Alabama, a second warehouse in Staten Island, and another outside of Albany, the New York state capital. Numerous unfair labor practice charges against Amazon related to those campaigns are still under review at the NLRB.

Amazon attempted to challenge the union election at JFK8 after the victory of the independent Amazon Labor Union, but lost that challenge, and the NLRB has recommended the union be certified.