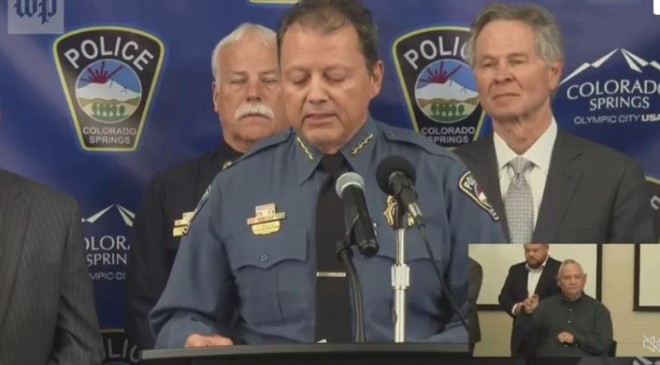 When the names of those shot to death in a Colorado Springs LGBTQ bar were read at a police news conference Monday, one thing stood out from the procedure that has become routine in a nation plagued by mass shootings: The police chief stated the pronouns of the deceased.

It was a small gesture, but an important one, LGBTQ advocates said. That a police department in a conservative part of Colorado known for being home to the Air Force Academy would take such care with an often politically divisive detail came as a surprise to some.

But there was no question about it within the police force, said Pamela Castro, the department’s spokeswoman.

“For us there was not a lot of discussion about how we were going to identify the victims, because we all agreed from the beginning we would use their names and pronouns,” she told The Washington Post in an email. “For us, it simply came down to showing them the respect they deserve by identifying them using the names they and their loved ones used.”

Two of the people killed in the shooting at Club Q, a fixture of LGBTQ nightlife in Colorado Springs, about an hour’s drive south of Denver, were transgender. Transgender people often take on names that may better reflect their gender, but might not match official records of the name and gender they were assigned at birth.

“We respect all of our community members, including our LGBTQ community. Therefore, we will be identifying the victims by how they identified themselves and how their families have loved and identified them,” Vasquez said before reading the names of the victims.

Transgender people are often misgendered by the police, said Rich Ferraro, spokesman for GLAAD (Gay & Lesbian Alliance Against Defamation), so the organization contacted the Colorado Springs Police Department ahead of its news conference. “They assured us that respectful language would be used,” he said.

“It requires so little, but it means so much,” GLAAD said in a statement to The Post.

“Chief Vasquez’s acknowledgment of names and pronouns was inclusive, accurate and compassionate,” GLAAD said. “Hopefully it was also a measure of comfort to families in grief and to a community in shock. LGBTQ people are not always called the right name, or they’re misgendered, including often by police, and it can hurt.”

Transgender and nonbinary youths whose pronouns are used by all or most of the people in their lives are far less likely to attempt suicide, according to the Trevor Project, a suicide-prevention organization for LGBTQ youths. The Trevor Project found in a 2020 survey that among youths who attempted suicide, 28 percent said none of the people in their lives respected their pronouns, while 12 percent said all or most did.

“Everyone wants to be treated with dignity and respect, especially in our most vulnerable and human moments. We can best honor the legacy of those we have lost by accurately representing who they were in life and fostering a greater understanding of our LGBTQ community,” Kasey Suffredini, vice president of advocacy and government affairs at the Trevor Project, said in a statement to The Post.

The shooting, which left at least 18 others injured, “has all the trappings of a hate crime,” said Colorado Springs Mayor John Suthers (R), cautioning that the investigation was just beginning. A city spokesman said the suspected gunman faces five murder charges and five charges of committing a bias-motivated crime.