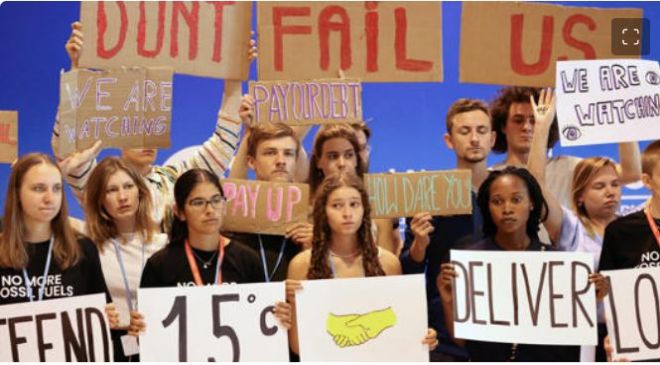 SHARM EL SHEIKH, Egypt — Negotiators from nearly 200 countries concluded two weeks of talks early Sunday in which their main achievement was agreeing to establish a fund that would help poor, vulnerable countries cope with climate disasters made worse by the pollution spewed by wealthy nations that is dangerously heating the planet.

The decision regarding payments for climate damage marked a breakthrough on one of the most contentious issues at United Nations climate negotiations. For more than three decades, developing nations have pressed for loss and damage money, asking rich, industrialized countries to provide compensation for the costs of destructive storms, heat waves and droughts fueled by global warming.

But the United States and other wealthy countries had long blocked the idea, for fear that they could be held legally liable for the greenhouse gas emissions that are driving climate change.

The agreement hammered out in this Red Sea resort town says nations cannot be held legally liable for payments. The deal calls for a committee with representatives from 24 countries to work over the next year to figure out exactly what form the fund should take, which countries should contribute and where the money should go. Many of the other details are still to be determined.

The creation of a loss and damage fund was almost derailed by disputes that ran into the dawn hours of Sunday over other elements of a broader agreement, including how deeply countries should cut their emissions and whether to include language that explicitly called for a phaseout of fossil fuels, including coal, natural gas and oil. By 5 a.m. in Egypt, negotiators were still debating those other measures.

Developing nations — largely from Asia, Africa, Latin America, the Caribbean and South Pacific — fought first to place the loss and damage fund on the formal agenda of the two-week summit. And then they were relentless in their pressure campaign, arguing that it was a matter of justice, noting they did little to contribute to a crisis that threatens their existence. They made it clear that a summit held on the African continent that ended without addressing loss and damage would be seen as a moral failure.

“The announcement offers hope to vulnerable communities all over the world who are fighting for their survival from climate stress,” said Sherry Rehman, Pakistan’s minister for climate change. “And gives some credibility to the COP process.”

Pakistan, which spearheaded a group of 134 developing nations pushing for loss and damage payments, provided a fresh reminder of the destructive forces of climate change. Over the summer, Pakistan suffered devastating flooding that scientists say was made worse by global warming, resulting in more than 1,500 deaths, plunging one-third of the country underwater and causing $30 billion in damages, even as Pakistan contributes less than 1 percent of the world’s planet-warming emissions.

As the summit was nearing an end, the European Union consented to the idea of a loss and damage fund, though it insisted that any aid should be focused on the most vulnerable nations, and that aid might include a wide variety of options such as new insurance programs in addition to direct payments.

That left the United States, which has pumped more greenhouse gases into the atmosphere than any nation in history, as the last big holdout. By Saturday, as talks stretched into overtime, American officials said that they would accept a loss and damage fund, breaking the logjam.

The United States and the European Union are pushing for assurances that China will eventually contribute to any fund created — and that China would not be eligible to receive money from it. The United Nations currently classifies China as a developing country, which would make it eligible for climate compensation, even though it is now the world’s biggest emitter of greenhouse gases as well as the second-largest economy. China has fiercely resisted being treated as a developed nation in global climate talks.

There is also no guarantee that wealthy countries will deposit money into the fund. A decade ago, the United States, the European Union and other wealthy emitters pledged to mobilize $100 billion per year in climate finance by 2020 to help poorer countries shift to clean energy and adapt to future climate risks through measures like building sea walls. They are still falling short by tens of billions of dollars annually.

While American diplomats agreed to a fund, money must be appropriated by Congress. Last year, the Biden administration sought $2.5 billion in climate finance but secured just $1 billion, and that was when Democrats controlled both chambers. With Republicans, who largely oppose climate aid, set to take over the House in January, the prospects of Congress approving an entirely new pot of money for loss and damage appear dim.

“Sending U.S. taxpayer dollars to a U.N. sponsored green slush fund is completely misguided,” said Senator John Barrasso, Republican of Wyoming. “The Biden administration should focus on lowering spending at home, not shipping money to the U.N. for new climate deals. Innovation, not reparations, is key to fighting climate change.”

For their part, a variety of European nations have voluntarily pledged more than $300 million to address loss and damage so far, with most of that money going toward a new insurance program to help countries recover from disasters like flooding. Poorer countries have praised those early efforts while noting that they may ultimately face hundreds of billions of dollars per year in unavoidable, irreversible climate damages.

“We have the fund, but we need money to make it worthwhile,” said Mohamed Adow, executive director of Power Shift Africa, a group that aims to mobilize climate action across the continent. “What we have is an empty bucket. Now we need to fill it so that support can flow to the most impacted people who are suffering right now at the hands of the climate crisis.”

There was a brewing debate over what to call the new fund. Developing nations consider it “compensation” and climate activists often refer to it as “reparations.” But diplomats, particularly the Americans, called the money “loss and damage resources.”

In addition to a loss and damage fund, developing nations used the climate talks to push for reforms at two of the world’s biggest lending institutions, the World Bank and International Monetary Fund.

The agreement reached in Sharm El Sheikh broaches the possibility of both institutions paying into the loss and damage fund. Heavy debt is one of the main obstacles developing countries face in being able to respond adequately to climate-driven crises, both immediate and long-term.

The two-week summit, which was scheduled to end Friday, stretched into Saturday as negotiators from nearly 200 nations clashed over several thorny issues. The talks come at a time of multiple crises. Russia’s invasion of Ukraine has roiled global food supply and energy markets, stoked inflation and spurred some countries to burn more coal and other alternatives to Russian gas, threatening to undermine climate goals.

At the same time, rising global temperatures have intensified deadly floods in places like Pakistan and Nigeria, as well as fueled record-breaking heat across Europe and Asia. In the Horn of Africa, a third year of severe drought has brought millions to the brink of famine.

One area of concern at the talks was whether nations would strive to keep global temperatures from rising more than 1.5 degrees Celsius (2.7 degrees Fahrenheit) above preindustrial levels, a goal that nations emphasized at climate talks last year in Glasgow. Beyond that threshold, scientists say, the risk of climate catastrophes increases significantly.

The planet has already warmed by an average of 1.1 degrees Celsius, and scientists have said that countries need to cut their carbon emissions more quickly and more significantly to keep warming to 1.5 degrees Celsius. The world is currently on a trajectory to warm by 2.1 to 2.9 degrees Celsius by the end of this century.

Every fraction of a degree of additional warming could mean tens of millions more people worldwide exposed to life-threatening heat waves, water shortages and coastal flooding, scientists have found. A 1.5-degree world might still have coral reefs and summer Arctic sea ice, while a 2-degree world most likely would not.

“One point five is not just a number that somebody invented,” Espen Barth Eide, Norway’s minister of climate and environment told the conference on Friday. He spoke about “the paramount difference, the dramatic difference between warming that ends at 1.5 and 2 degrees.”

“Entire countries that are present here will simply disappear from the surface of the planet. Most of all the ice on the world will melt,” he said. “Cities we love and live in will be gone. It’s such a drama in front of us that we simply have to make sure that we stick to what we were told to do in Glasgow.”

One of the biggest obstacles to a deal at this year’s talks, negotiators said, was the chaotic management style of the Egyptian hosts, whose job it is to understand the concerns of each country and then broker a deal.

Diplomats complained that the Egyptian presidency held middle-of-the-night meetings and allowed delegates to see only snippets of potential text. Technical issues with sound delayed negotiating sessions. Lack of easy access to food and water also slowed down progress; negotiators had to hunt for sandwiches and coffee in the sprawling venue.

“I’ve never experienced anything like this in 25 years,” said one longtime delegate, who asked not to be identified because talks were still ongoing. The delegate called the process “untransparent, chaotic, unpredictable.”

While the conference was scheduled to end on Friday, negotiators did not reach a final agreement until dawn on Sunday morning.