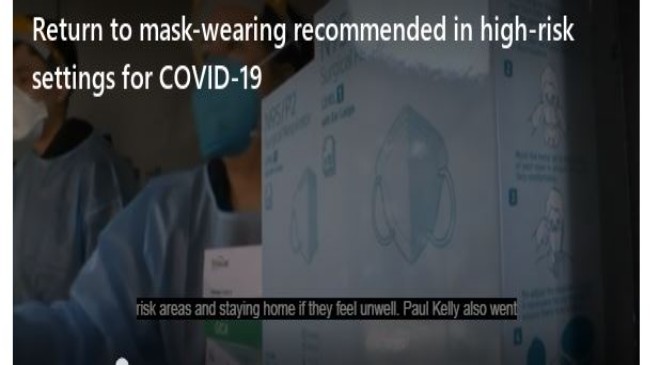 Los Angeles County Department of Public Health officials are once again strongly recommending people to mask up as coronavirus cases are on the rise.

With the latest data released on Thursday, which shows that the local seven-day average of daily new COVID-19 infections rose to 100 per 100,000 residents, officials are “strongly recommending” that people consider masking in all public indoor settings.

That number is a significant jump from last week, which was 86 per 100,000 residents.

1,949 infections were reported on Thursday, with the seven-day average daily rate of people testing positive for the virus sitting at 6.8% on Thursday, up from 5.7% a week ago.

The recommendation is not a mandate, so masking is not required by any means. But, officials warn that if numbers continue to trend in the wrong direction, Angelenos could see the return of mandatory masking.

According to numbers announced by Davis on Thursday, the county is reporting around 1,500 new cases daily — up 52% from the beginning of November. He says those numbers likely aren’t correct either, due to the amount of people taking at-home tests or not reporting their sickness.

As of Thursday, the number of COVID-positive patients in county hospitals rose to 648, up from 589 the previous day. Roughly 40% of those patients are admitted for coronavirus-related issues, while the rest were admitted for other reasons, but tested positive at the hospital.

The announcement comes on the heels of a number of warnings from health officials that the Southland could experience its third-straight winter surge, which they attribute to the increased amount of gatherings due to holidays.

They also suggest that the threat of newly-discovered variants, which are often more contagious, could spread rapidly from person to person, even those vaccinated.

“We are grateful this year to have the tools that allow us to gather with a lot of safety,” Davis said. “It will mean however that all of us likely will need to take some common sense precautions to avoid future disruptions and the spread of illness.”

He suggests getting vaccinated, keeping away from sick individuals, frequently washing hands and wearing a mask in crowded areas.