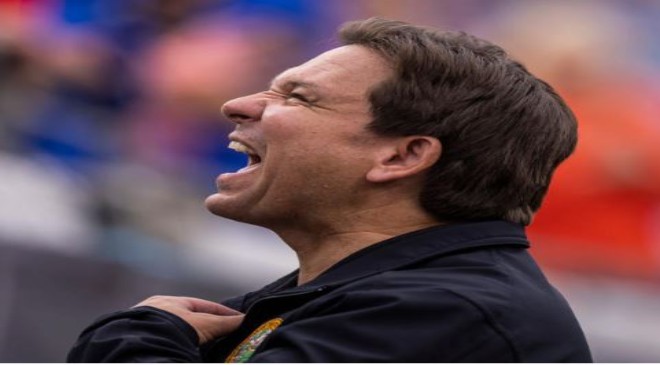 Florida Gov. Ron DeSantis once spent a year teaching at a private school in Georgia, where former students said he was a “total jock” who would party with students, according to a New York Times report.

DeSantis, then a 23-year-old graduate from Yale University, used to tell his students that he was bound for the White House when he taught at Darlington School, a prestigious private school in Rome, Georgia, former students told the Times.

“He was a total jock; that was his personality,” Gates Minis, a 2003 graduate of the school, told the Times. “He was definitely proud that he graduated Ivy and thought he was very special.”

DeSantis taught at Darlington, which enrolled about 750 students from kindergarten to high school, for the 2001-2002 school year, according to the Times. Tuition, room, and board at the school with its 500-acre campus costs about $50,000 today, per the Times.

“He was definitely one of the cooler guys,” former student Trip Barnes told the Times. “There were other young teachers who tried to be everybody’s friend who didn’t have nearly his mystique.”

Barnes described DeSantis, who coached baseball and football, as “very smart” and “charismatic,” noting that “people liked him” at Darlington. Some other students recalled the Florida governor differently, telling the Times he had a bit of a superiority complex.

“Mr. DeSantis was kind of a smug guy,” former student Matthew Arne told the Times, adding that many students were aware that DeSantis had just graduated from an Ivy League school.

A spokesperson for DeSantis did not respond to Insider’s request for comment.

Multiple students told the Times that DeSantis frequented parties with Darlington high school seniors and attended some events with graduates where alcohol was served.

“As an 18-year-old, I remember thinking, ‘What are you doing here, dude?'” one former student said, speaking on the condition of anonymity for fear of retaliation, the Times reported.

Former students also recalled an incident in which DeSantis dared a student – who bragged about the quantity of milk he could drink – to chug as much as he could in one sitting. The student complied and proceeded to throw up in front of dozens of other students, according to the Times.

Some students had positive memories of DeSantis, recalling his coaching on the baseball team.

“He helped a lot of us out there on the field, especially when some of us were distracted by being young adults,” 2004 graduate Lee Graddy told the Times. “I know a few of us weren’t the greatest; with his guidance we became good baseball players and better people.”