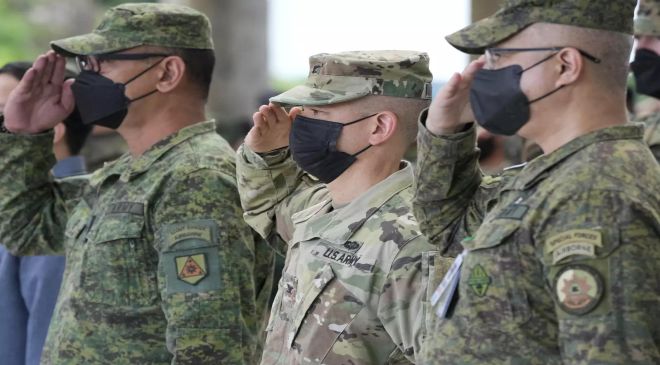 CAPAS, Philippines (AP) — Truck-mounted launchers blasted off rockets and U.S. stealth fighter jets streaked across the northern Philippine sky on Thursday in a combat drill that marked the latest display of American firepower in a region where Washington has tried to deter what it warns as China’s growing aggression.

The live-fire exercises at a gunnery and bombing range in a desolate valley in Capas town north of Manila were the highlight of two weeks of combat readiness maneuvers, which included mock amphibious assaults and joint coastal defense tactics involving more than 2,500 American and Philippine marines.

Howitzer artillery shots boomed across the dusty valley hemmed in by a mountain range and hills from U.S. and Philippine marine fire positions, some concealed by camouflage tents.

Called Kamandag — a Tagalog acronym for “Cooperation of the Warriors of the Sea” — the military maneuvers ending on Friday were being held simultaneously with combat drills between U.S. Marines and Japanese army forces on Japan’s northern island of Hokkaido that involve about 3,000 military personnel from the two sides, U.S. military officials said.

U.S. Maj. Gen. Jay Bargeron of the Japan-based 3rd Marine Division has said the exercises were aimed at bolstering the defensive capabilities of the U.S. alliance with the Philippines and Japan, and ensuring that “we are prepared to rapidly respond to crisis throughout the Indo-Pacific.”

“This exercise is an important opportunity to bring together U.S. and Philippine capabilities and personnel to strengthen our combined readiness, proficiency and trust,” U.S. Marine Lt. Col. Kurt Stahl told The Associated Press.

America’s High-Mobility Artillery Rocket System or HIMARS rocket launchers, which have recently helped Ukraine gain momentum in its war with Russia, and F-35B supersonic fighter jets were showcased in the military exercises on Wednesday and Thursday.

The HIMARS launchers fire GPS-guided missiles. Depending on the munitions and system configuration, HIMARS are capable of hitting targets up to 300 kilometers (186 miles) away, Stahl said. The highly mobile launchers are hard for the enemy to spot and can quickly change position after firing to escape retaliatory airstrikes.

While it could deliver a precision strike against critical targets like a communications system or radar, HIMARS could also be used to stop an enemy force from gaining “on a contested piece of coastal terrain,” Stahl said.

F-35B jets also can play a significant role “in increasing battlefield awareness” between allied forces on the ground and in the air through a communication link, and providing details on positions of adversarial forces, he said.

Stahl echoed remarks by Philippine military officials that the regularly scheduled annual exercises were not directed against any country.

The combat maneuvers, however, were being held at a time when Washington has more sternly warned Beijing over its increasingly assertive actions against Taiwan and rival claimant states in the South China Sea.

Separately in July, U.S. Secretary of State Antony Blinken called on China to comply with a 2016 arbitration ruling that invalidated Beijing’s vast territorial claims in the South China Sea. He warned that Washington is obligated to defend the Philippines under a 1951 U.S.-Philippines Mutual Defense Treaty if Filipino forces, vessels or aircraft come under attack in the disputed waters.

The ruling was issued by a tribunal set up in The Hague under the U.N. Convention on the Law of the Sea after the Philippine government brought China to arbitration in 2013 over Beijing’s seizure of a shoal off the northwestern Philippines. China did not participate, called the arbitration decision a sham and continues to defy it.

Vietnam, Malaysia, Taiwan and Brunei also have overlapping claims in the busy waterway, where an estimated $5 trillion in goods passes each year and which is believed to be rich in undersea gas and oil deposits.

The military drills were the first large-scale exercise between the treaty allies under newly elected Philippine President Ferdinand Marcos Jr., who took office in June after a landslide election victory.

His predecessor, Rodrigo Duterte, was an outspoken critic of U.S. security policies and nurtured closer ties with China and Russia.

Early in his presidency, Duterte threatened to sever ties with Washington and frowned on military exercises with American forces that he said could offend Beijing.

Duterte later attempted to end a key defense pact that allowed large number of American forces to visit the Philippines for combat exercises but walked back his threat.