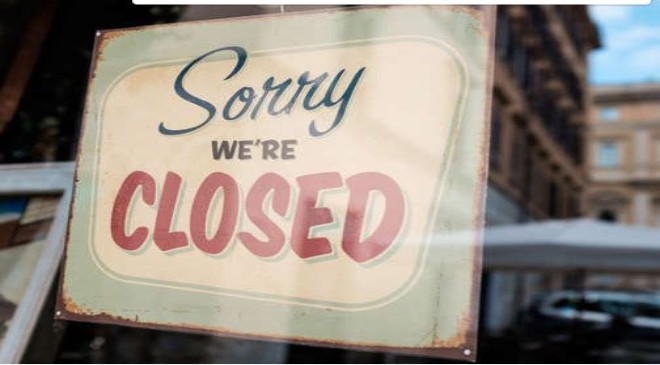 Stores that have been around for decades are often the most comforting: They offer familiar faces and families, the same products, and the friendly service you expect when visiting a homegrown business. But unfortunately, sometimes these retailers can’t withstand the test of time, even after surviving for 70, 80, 0r even 100 years. Read on to find out which beloved stores are closing their doors, all after 70-plus years in business.

Age-old businesses have been closing nationwide.

Last month saw the announcements of some other long-standing businesses shutting down stores.

You may recognize Bartell Drugs if you’re familiar with the Seattle, Washington area, as the name dates back to its founding in 1890. On Sept. 14, one of the small chain’s locations in the Chinatown International District was closed due to “business strategy, lease and rent considerations, local business conditions and viability and store performance,” its new parent company Rite Aid announced.

Also in September, the Folsom General Store in Louisiana, which was first opened in 1938, announced that it would be saying goodbye. No set closing date was announced by current owner Bernie Willie, nor was a formal reason, but he told NOLA.com that he remains “committed” to the store during its final days.

And while one general store is calling it quits, Randsburg General Store in the Mojave Desert in California is doing its best to stay afloat. Loyal customers launched a GoFundMe to keep the small establishment from going under, NBC-affiliate KGET reported, and according to a Sept. 30 Facebook post, patrons’ “support and generosity” has kept doors open “just a little bit longer.”

A longstanding clothing store will soon be no more.

In West Brighton, a neighborhood in Staten Island, New York, a small but beloved clothing store is shutting down after 71 years. A Sept. 29 post on Suzanne’s Fashion Corner, Ltd.’s Facebook page announced a storewide liquidation sale of the store’s baby apparel, communion outfits, girls dress, and ladies wear on Oct. 27.

“This is not a major department store, this is not Amazon,” Suzanne Berelson, the store’s owner, told SILive.com. “The things we carry here, you won’t find them anywhere else. I’ve supplied five generations with exclusive, hard-to-find merchandise. It’s been wonderful. I don’t want to close, but there really is no other choice.”

Berelson, who is the daughter of the store’s original founder, Irene Berliner, added that like many other small businesses, COVID was the final pain point. While there is no official closure date, she expects the final sale will allow her to vacate the store space before her lease ends on Jan. 1, 2023.

Another sector will be hit with a loss.

Hardware stores are another go-to stop for many, but one in Livonia, Michigan, will be no more. The current owners of Wright’s Hardware, Joe and Jeri Dorr, have sold the building and are planning to retire, Hometownlife.com reported.

The store has been open for roughly 70 years, first owned by the family of Dennis Wright, and was taken over by the Dorrs 14 years ago. But customers’ ability to purchase what they need online has hurt profits, as well as increasingly dryer winter seasons. For snow equipment, in particular, demand has been decreasing “steadily,” Jeri told Hometownlife.com. The couple did not say when the store will be shutting down, but they did say it’s “bittersweet,” as they are also ready for retirement.

One state will see two losses.

An outdoor equipment store in Belleville, Illinois, is also closing after 76 years in business, having first opened its doors in 1946, Belleville News-Democrat reported. Curt Smith’s Outdoors will make its last sale at the end of 2022, manager Tom Petrekovich told the outlet.

Despite Petrekovich calling it a “well-known establishment,” the store’s owner, Steve Smith, is ready to retire, and a storewide liquidation sale will be held in October. Depending on how soon they can clear inventory at discounted prices, the store may close sooner, Petrekovich said.

Seventy-plus years is certainly a feat, but reaching 100 years in business is a remarkable accomplishment, especially for smaller operations. A four-and-a-half hour drive from Belleville, Skokie, Illinois is home to the Sandberg Jewelers, which is 103 years old. The store has been a staple since 1919, but it is, unfortunately, shutting down after over a century of “celebrating life’s special moments with the Chicagoland community,” an Oct. 2 Facebook post reads.