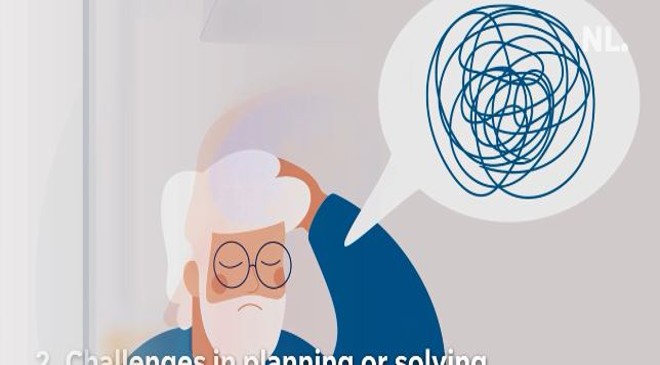 In a widely-anticipated study, Eisai and Biogen on Tuesday said their Alzheimer’s drug slowed cognitive decline among people with early signs of the disease.

The study, led by Eisai, which has teamed with Biogen to develop the drug called lecanemab, showed the drug targeting amyloid beta in the brains of study participants slowed memory and thinking problems.

Eisai officials said the new study recruited 1,795 people with earlier Alzheimer’s disease and amyloid beta in the brain. Participants received either a 10 mg per kilogram dose every two weeks over 18 months or a placebo.

The study reported the drug reduced cognitive decline by 27% in people who received the drug compared to placebo.

People on the medication experienced side effects such as brain swelling and tiny bleeds common with similar amyloid-targeting drugs. The study reported that 17% of people experienced small brain bleeds, compared to 8.7% in the placebo group. The side effects were detected in brain images but rarely caused symptoms.

Eisai already submitted an application to FDA for accelerated approval of the drug based on a smaller, earlier-stage clinical trial. Eisai officials said they will now submit the new trial results to the FDA to bolster its case that lecanemab should be approved as an Alzheimer’s treatment.

The companies expect FDA will make a decision by Jan. 6.

“Today’s announcement gives patients and their families hope that lecanemab, if approved, can potentially slow the progression of Alzheimer’s disease, and provide a clinically meaningful impact on cognition and function,” said Michel Vounatsos, Chief Executive Officer at Biogen.

Tokyo-based Eisai and Cambridge, Massachusetts-based Biogen disclosed the clinical trial results in a news release. More detailed findings about the late-stage study will be presented on Nov. 29 at the Clinical Trials of Alzheimer’s Disease Conference in San Francisco.

The study is the latest test to a three decade-old theory that Alzheimer’s disease is triggered by amyloid beta plaques in patients’ brains and can be slowed by drugs that target the buildup of those plaques.

Drug companies have struggled through a long list of failed clinical trials with amyloid-targeting drugs. Biogen’s Aduhelm became the first new amyloid-targeting Alzheimer’s drug to gain FDA  approval last year. It was controversial because it was based on two studies that ended prematurely and yielded mixed results.

The FDA’s outside expert advisers recommended against approval, and when the agency approved the drug anyway, three advisers quit in protest.

Haruo Naito, Eisai’s Chief Executive Officer, said the lecanemab study results “prove the amyloid hypothesis, in which the abnormal accumulation of (amyloid beta) in the brain is one of the main causes of Alzheimer’s disease.”

In a statement, the Alzheimer’s Association said lecanemab’s study reported the “most encouraging results … to date” among drugs targeting Alzheimer’s disease.

“For people in the earliest stages of Alzheimer’s, this treatment has the potential to change the course of the disease in a clinically meaningful way. These results indicate lecanemab may give people more time at or near their full abilities to participate in daily life, remain independent and make future health care decisions,” the association said.