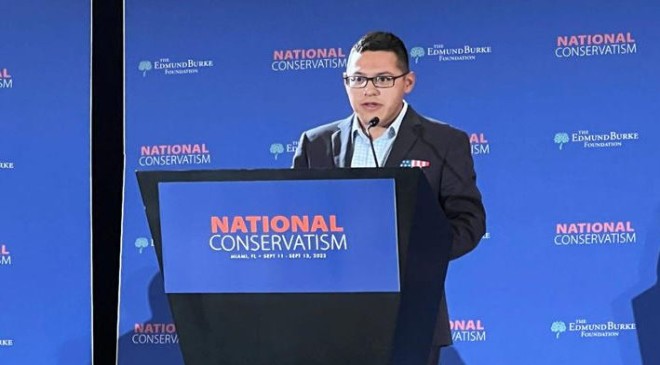 Speaking at the National Conservatism conference in Florida, Rosas accused America’s institutions, including the media, of being “hellbent” on “further dividing us based on skin color while telling us it is for the greater good,” portraying minorities like himself as the “victim” and that the solution is “equity.” He also asserted that the social media critics who call him a “race traitor” among other racial insults come from the left.

“They can not grasp that I, as someone who was initially raised by a single mother and is the product of immigration, can think for myself and reject the victimhood orthodoxy offered by our supposed betters,” Rosas told the conservative audience on Monday.

Rosas, author of the book “Fiery But Mostly Peaceful: The 2020 Riots and the Gaslighting of America,” declared that “all riots matter” and saw the media’s justification of the unrest in cities across the country following the murder of George Floyd, saying it “exposed the rot that is still infecting once-trusted institutions” like the press.

He zeroed in on the media’s reporting of the police-involved shooting of Jacob Blake, which pushed the false narrative that the Kenosha man was “unarmed.”

“There was no time to figure out what led to the shooting because there was no need. It was just another example of racism in policing, because obviously,” Rosas snarked. “Now this once quiet lakeside town found itself experiencing widespread riots that resulted in multiple businesses burned, injured police officers and local residents. Not only did we find out later Blake did have a knife on him and resisted arrest from officers, but he was in the process of kidnapping children from the mother who he had been accused of sexually assaulting. The mother was the one who called the police for help because Blake was violating the protective order she had against him.”

“None in the media who encouraged or justified the Kenosha riots have apologized or faced the direct consequences like those who still live in the area had to deal with. The effects of the BLM riots are still with us even though the rubble has since given way to empty lots,” Rosas continued.

The conservative writer then pivoted to the recent Duke volleyball story members of the media uncritically promoted claims made by Black athlete Rachel Richardson, who alleged racial slurs and threats were hurled against her by a Brigham Young University (BYU) fan during a game. Last week, an investigation conducted by BYU concluded that if found no evidence to back up Richardson’s claims.

“Rise and repeat with the media cycle, where outlets like CNN and sporting networks ran with the story without a hint of skepticism,” Rosas said. “Despite the ample evidence not supporting the accusations of racism, even before the investigation concluded, a USA Today sports editor accused Republicans of a conspiracy theory!”

Rosas blasted the media’s use of “Latinx” to describe the Hispanic community despite polling that shows most Latinos oppose the woke terminology, saying outlets “still run that slur in headlines and in the body of their stories.”

He went on to address crime in Democrat-run cities, saying “The blood of minorities… have been spilled because we have an activist media class who is insulated from the ‘progressive’ policies they champion from their various platforms.” Rosas also roasted the media for accusing conservatives of being “racist” for sounding the alarm on illegal immigration.

“Had I been stuck in the victim mentality, I would’ve been happy to believe White people are the root of my problems and the only hope to succeed was to have the government act on my behalf or at their expense. But kids these days are inundated through media, which in turn is amplified by social media, that skin color is all that matters. It’s a dangerous path we are on and the 2020 riots prove it. It was of the ends justifying the means,” Rosas said.

“Now I know this speech hasn’t exactly been uplifting, but I’m not going to sugarcoat the situation on the ground… Not to say it’ll be easy or without some failures along the way, but I believe we can truly right the ship we’re on because the lives of Americans are depending on it,” Rosas added.