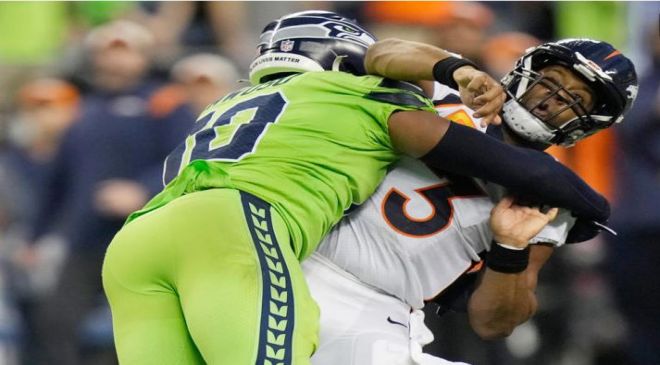 SEATTLE — Of course this came down to the final seconds.

How could it not for Russell Wilson in his return to Lumen Field? How could the reunion of a Super Bowl champion quarterback and the only franchise he knew for a decade not finish in dramatic style?

How could it not for Pete Carroll and for the raucous Seattle crowd, who watched Wilson orchestrate so much late-game magic over the course of 157 starts and 10 seasons and for the first time were faced with being on the defending end?

Certainly as Wilson guided the Broncos to a pair of third-down conversions and out to midfield, trailing by a point late in the fourth quarter, many in the building regardless of sideline or jersey color or allegiance must have believed he was going to author another storybook ending, this one as the villain rather than the hero.

Denver’s Nathaniel Hackett in his head coaching debut opted to send Brandon McManus out for a 64-yard field goal attempt on fourth-and-5 with 20 seconds left rather than give Wilson and the offense a do-or-die chance at converting and making McManus’ job easier.

McManus told the staff before the game his range extended to the 46-yard line on the left hash. Denver got to that spot exactly, the edge of the veteran kicker’s range but close enough that Hackett decided it was the Broncos’ best chance at points.

“We were right on the line, but he had plenty of distance,” Hackett said. “Brandon gave it his best shot. That’s a long field goal to hit. I think he’s completely capable of that, but obviously I wish we got a lot closer. It put us in that weird spot there because we were in field goal range but in that fourth-down situation.”

There’s no gray area in that spot for a rookie head coach. It’s the offense or the field goal unit.

“Fourth-and-six, for me during that time, we had been moving it just slightly. We weren’t moving it in big chunks. I think we had just given up a sack right before that,” Hackett said, though the only negative play on the drive was a 4-yard loss on a completion to the flat. “I wanted to be sure that we took a chance (at points) when we had a chance and we felt confident in (McManus).”

McManus’ career-long is 61 yards and he entered Monday 1-of-4 from 60-plus. The longest field goal made at Lumen Field: 56 yards.

“I knew there was a good chance we might kick it,” McManus said. I’ve got to make them. I told them I can make that kick.”

Wilson, who at the beginning of this month signed a five-year, $245 million extension that will keep him under contract with the Broncos through 2028, backed his head coach’s decision.

“Any time you can find a way to try to make a play on fourth-and-5, that’s great, too, but also I don’t think it was the wrong decision,” Wilson said.

Carroll, the 70-year-old Seattle head coach, said he thought Wilson would have the ball in his hands.

“I was surprised that they took Russ out there at the end,” he said. “We weren’t thinking field goal there. We were thinking it was fourth down and they were still going.”

While Hackett’s assertion that Denver had moved the ball in only fits and spurts during the final drive, it showed the sort of explosiveness in the middle of the field that an offensive-minded head coach could easily have rationalized as reason enough to put the offense on the field for a potential game-deciding play.

Denver rolled up 433 offensive yards at a 6.8-per-snap clip in its first outing with this leadership and Wilson 29-of-42 for 340 and a touchdown.

The final drive – 10 plodding plays for 32 yards over 3:47 – was only the last of several opportunities Denver squandered to begin its year as a postseason hopeful in the vaunted AFC West with a victory. Instead, a team that focused intensely on two-minute and red-zone situations through training camp and did not do any live tackling or play many of its starters in the preseason struggled in those departments almost universally.

Two two-minute drives resulted in one field goal and saw the offense use the entire clock, but get questionable production and efficiency for it before halftime and at the end. A whopping five trips into the red zone resulted in just a trio of field goals plus a goal-line fumble each for the talented running back pair of Javonte Williams and Melvin Gordon.

“We’ve got to be better in the red zone and that starts with me,” Hackett said. “That starts with me. I’ve got to make sure we have a better plan and we’re able to get physical down there and get touchdowns instead of field goals or nothing at all.”

Denver’s defense missed tackles and rolled up penalty yardage early before stiffening in the second half. Even still, a dozen penalties for 106 total yards kept Seattle drives alive and hampered Denver’s progress, too. Denver’s defense committed seven infractions, while a fourth-quarter false start by Courtland Sutton took a go-ahead touchdown off the board and the Broncos had to settle for a field goal to get within 17-16.

Wilson was flagged for delay of game twice on Denver’s opening drive of the third quarter, a long march that ended when Melvin Gordon fumbled reaching for the goal line on fourth-and-goal. Several other times, the play clock wound to zero or very near as the Seattle crowd roared and made life difficult for the Broncos offense.

Wilson was flagged for delay of game twice on Denver’s opening drive of the third quarter, a long march that ended when Melvin Gordon fumbled reaching for the goal line on fourth-and-goal. Several other times, the play clock wound to zero or very near as the Seattle crowd roared and made life difficult for the Broncos offense.

“Crowd noise definitely played a factor,” center Lloyd Cushenberry said. “We’ve just got to get out of the huddle faster. Not really sure what it was, but we’ll talk about it when we get back in the office and fix it next week.”

All of those mistakes – and an opportunistic Seahawks bunch – conspired to be more than enough to keep Wilson from a victory in his emotional return here.

“They may cheer for you, they may boo you, they’ll love you one day and hate you the next,” Wilson said. “That’s sports. At the end of the day, I’m going to keep competing, keep battling.”

About two and a half hours before kickoff, he appeared out of the Southeast tunnel in warmups, walking and down the field, flipping a ball in his hands while cameras circled him and chronicled his every step. He had brief conversations with former Seahawks running back Marshawn Lynch and current starting quarterback Geno Smith.

Wilson made his way to midfield and spread his arms wide as he made a slow circle on the Seattle logo, looking up and taking in the empty stadium from underneath a large pair of headphones.

Ringed around the stadium, signs outlined all viewpoints of Wilson’s offseason trade to Denver. One read, “Let’s Cook Russ,” a revision to the popular “Let Russ Cook,” from his days in this city. Also, “Seahawks Fans Still Love Russ,” “Russ Can Finally Cook, Let’s Ride” and “Dude Turned Diva, Went Hollywood on Us.” A strong contingent of Denver fans made their way to Lumen Field, but that didn’t stop boos from raining down on Wilson over the course of the evening.

“It didn’t bother me. This is a hostile environment. It always has been,” Wilson said. “I didn’t expect them to give a round of applause.”

The quarterback on the other sideline, Seattle veteran Geno Smith, torched Denver in the first half.

He completed 17-of-18 for 164 yards and a pair of touchdowns – a 38-yarder to tight end Will Dissly on a busted coverage and a 25-yarder up the seam to tight end Colby Parkinson – in helping the Seahawks build a 17-13 lead.

The Seahawks’ production slowed in the second half – Denver pitched a shutout and Seattle managed just 47 yards and five first downs – but  the Lumen Field crowd chanted, “GE-NO, GE-NO” after every positive play from the quarterback as he and the Seahawks played mostly from in front.

Smith, starting his 35th career game at the outset of his ninth professional season, got the nod for Seattle in the three games last fall when Wilson was out with a finger injury.

On Monday night, he came away with a win over his former teammate.

“They wrote me off,” he told ESPN’s Lisa Salters moments after he bled the final seconds of the clock with a trio of kneeldowns. “I ain’t write back, though.”