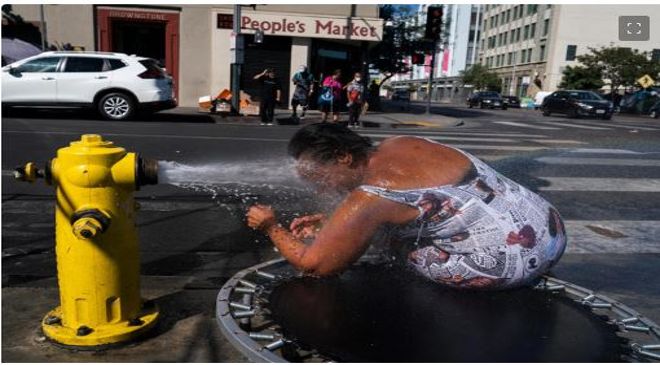 State officials hope to avoid that situation by asking residents to voluntarily use less power, even as the heat tempts Californians to crank up their air conditioners. Gov. Gavin Newsom also said the state has made infrastructure improvements since its last round of heat-fueled blackouts in 2020.

But if millions of people don’t conserve electricity, officials could be forced to temporarily cut the power in some regions for short periods of time.

What is a Flex Alert?

With excessive heat forecast into the weekend throughout California, the state issued a statewide Flex Alert Wednesday — a call for voluntary electricity conservation.

California’s Independent System Operator, which oversees the state’s electric power grid, has urged residents to conserve power between 4 p.m. and 9 p.m, when the grid is most stressed from high demand and less solar energy.

The alerts are typically effective, sometimes leading to more than a 10% reduction in overall energy use, according to Daniel Kammen, an energy professor at the University of California, Berkeley.

California has also added an estimated extra 4,000 megawatts to the grid since July 2020 as part of its goal to accelerate its transition to clean energy.

If Californians don’t conserve enough energy, and regulators don’t have enough power to meet demand amidst the heat wave, the state will be forced to institute widespread blackouts to reduce pressure on the electric grid.

As of Wednesday afternoon, Kammen said, blackouts aren’t expected. But the heat will last for days, and people struggle to conserve for that long.

“When we see the first flex your power alerts coming out, the response is significant,” he said. “And as they go on, we find that the response begins to fade.”

The peak load for electricity demand in California is projected to exceed 48,000 megawatts on Monday, the highest of the year, the system operator said.

Why is this happening? Is green energy to blame?

The looming potential of blackouts comes when officials fear demand for electricity will exceed the state’s ability to supply it, California Governor Newsom said in a press conference Wednesday.

Demand is high, he said, with more Californians turning up their air conditioning amid the sweltering temperatures. Doing so adds strain to the electric grid, which supplies power.

Because the heat wave is impacting the entire Western U.S., energy resources are stretched thin across state lines. Plus, severe and prolonged drought across the region has reduced California’s ability to generate hydroelectric power, Newsom said.

Newsom acknowledged the state’s push toward renewable energy, including solar and wind, was complicating the state’s ability to adapt to a sudden surge in demand. The supply of such energy diminishes after dark, when demand remains high.

But the state is working to offset the problem with solutions like using batteries to store power. And states not aggressively perusing green energy also have struggled in recent years to meet power demands amid extreme weather.