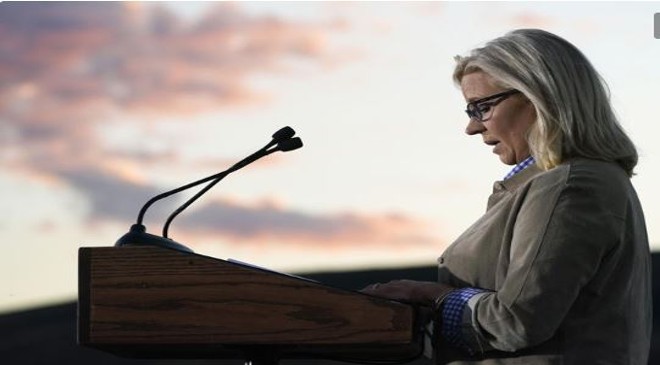 CONCORD, N.H. (AP) — As the sun set in Wyoming, U.S. Rep. Liz Cheney described her blowout loss as the beginning of a more consequential step in her political career. She summoned Abraham Lincoln, who lost elections for the House and Senate and still went on to become one of the nation’s most accomplished presidents.

But in the days since, would-be supporters in key states have openly expressed skepticism about a Cheney presidential run, even one solely designed to block Donald Trump’s return to the White House.

In fact, Republican voters and local officials in three of the states that matter most in presidential politics — Iowa, New Hampshire and South Carolina — believe the soon-to-be-unemployed congresswoman has little path to relevancy in a 2024 presidential primary, never mind a path to victory. Some sympathizers fear she would actually help Trump if she runs.

Such is the colossal political challenge ahead for Cheney, a Republican seeking to transform a 37-percentage-point home-state loss into a national campaign to destroy Trump’s White House ambitions. There is no precedent for what she hopes to accomplish.

“The Republican Party is a lot more diverse than it’s given credit for, and there will be some number of people who find her, and her message, appealing, but that is far from saying that there would be a warm reception, or a large reception,” said Micah Caskey, a Republican state representative in South Carolina. “I don’t see a Liz Cheney candidacy as being viable.”

In the hours after she conceded her Wyoming congressional primary to a little-known Trump acolyte, Cheney’s team transferred leftover campaign funds into a new entity she named “The Great Task,” borrowing a phrase from Lincoln’s Gettysburg Address. She vowed to devote the weeks before the November midterms to defeating Trump loyalists who continue to promote the lie that the 2020 election was stolen.

“I will be doing whatever it takes to keep Donald Trump out of the Oval Office,” Cheney told NBC’s “Today” show. She acknowledged she is thinking about a 2024 presidential run. “I’ll make a decision in the coming months.”

Cheney, the 56-year-old daughter of former Vice President Dick Cheney, has not ruled out running in 2024 as a Republican or an independent. But those close to her now believe an independent run would likely attract more support from Democrats than Republicans, which would undermine her goals. Therefore, if she runs, it would almost certainly be as a Republican.

Her team believes that Cheney would enter the 2024 Republican contest as the undisputed leader of the anti-Trump lane, which could include the likes of Maryland Gov. Larry Hogan, Rep. Adam Kinzinger, R-Ill., and former New Jersey Gov. Chris Christie. The Cheney name is universally known, they note, and she enjoys a national fundraising base that brought in more than $15 million for her failed reelection bid. She would also have the support of her father and maintains close ties to former President George W. Bush, who hosted a fundraiser for Cheney last fall.

She will continue to play a leading role in the House investigation into the Jan. 6 insurrection, which is set to host another round of hearings in September.

Despite those factors, there has been little sign of enthusiasm for Cheney in the states most likely to decide the next GOP presidential nomination.

Voters were openly celebrating her loss at the Iowa State Fair, a must-stop for presidents and presidential contenders ever since the state began hosting the nation’s opening presidential primary contest a half-century ago.

Other voters who stopped by the GOP booth were less pointed than Wyna but no less dismissive of Cheney’s political ambitions.

“I’m never going to vote for her because I believe she betrayed the Republican Party by voting to impeach President Trump,” said Janet Diers, a 67-year-old retired special education teacher from rural western Iowa.

Gentry Collins, a veteran Iowa and national Republican operative who opposes Trump, said he has “great respect” for Cheney, but he doesn’t see how she wages a viable campaign for president.

“Where do the votes come from? Maybe she aggregates the anti-Trump vote, but that’s not enough,” said Collins, a former political director for the Republican National Committee. “She’s my kind of Republican, but I don’t see an opening.”

It was much the same across New Hampshire, which traditionally hosts the nation’s second Republican primary contest.

While the state prides itself on ushering in presidential candidates every four years, Republican Gov. Chris Sununu, who has mocked Trump, declined an opportunity to welcome a prospective Cheney campaign when given the opportunity.

“The governor has given no thought or consideration as to who may or may not run for president in 2024,” Sununu spokesperson Ben Vihstadt said. “He is solely focused on the midterms in less than 100 days, and firmly believes every second spent speculating about 2024 is a waste of time.”

Early presidential primary jockeying has been underway for several months. And the first Republican presidential announcement could come any time. Trump is weighing whether to declare his presidential intentions before or after the midterms.

Republican presidential prospects have been flocking to Iowa and New Hampshire for months already. The visitors include former Vice President Mike Pence, former Secretary of State Mike Pompeo, Sen. Tom Cotton and former U.N. Ambassador Nikki Haley. Florida Gov. Ron DeSantis is another frequent name discussed by local Republican primary voters, though he has yet to make an appearance.

Cheney herself delivered a speech in New Hampshire late last year, declaring that Trump was at war with the rule of law.

Caskey, the South Carolina state representative, believes Trump may be vulnerable in a small Republican field, but a large Republican field would divide the anti-Trump vote and help Trump claim his party’s nomination again.

“I think Donald Trump is the odds-on favorite to win if he runs, but I don’t think he has an assured path to victory,” Caskey said. “I think the more candidates that get involved, the more likely it is that he succeeds.”

Matthew Bartlett, a veteran New Hampshire Republican operative who worked in Trump’s State Department but quit after the Jan. 6 insurrection, said there’s plenty of buzz across the state about presidential candidates — save one.

“Not one person is talking about Liz Cheney,” Bartlett said. “I don’t think she knows what she’s doing.”

Nationally, around 7 in 10 Republicans continue to support Trump. That number may have jumped in the days after the FBI executed a search warrant at his Florida estate, though critics note that Trump’s multiple legal entanglements could ultimately damage his standing. Cheney, meanwhile, is lumped near the bottom with Pompeo and Haley, among others, in early public polling.

Voters tend to agree with the political professionals.

Claire Potter wore a Cheney T-shirt on a recent trip to Conway, New Hampshire, to “express my admiration as a Democrat” for the position she has taken against Trump. Potter, a history professor at The New School in New York, also donated $25 to the Cheney campaign.

“I don’t hope that she runs for president,” Potter said. “I think that could be really dicey in terms of keeping Trump out of the White House. But I trust her political instincts around what she does next.”