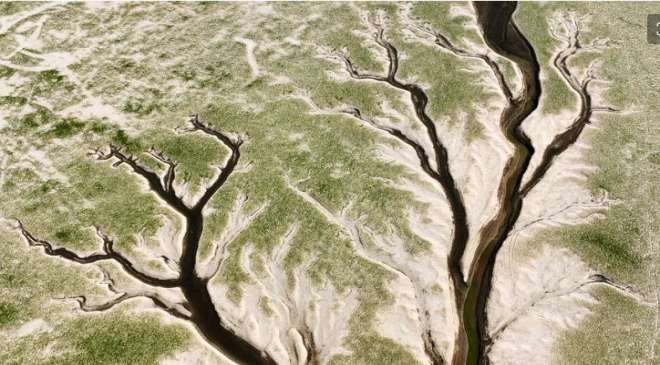 Among the many striking images is a pattern left in the mud flats around Poyang Lake, usually the largest body of freshwater in the country, which has shrunk by more than two-thirds. Chinese media dubbed the branchlike patterns carved by trickling waters “Earth tree,” calling its appearance a warning about a dangerous future of intensifying extreme weather.

At 73 days and counting, the relentless heat wave has easily surpassed the previous record of 62 days in 2013. All-time highs are being broken, often only to be rebroken days later. “This heat wave overtakes anything seen previously worldwide,” tweeted climate historian Maximiliano Herrera.

Numerous fires have started across China over the past week amid high heat and drought, with particularly intense blazes near Chongqing, a city along the trickling Yangtze, in central parts of the country. Chongqing recorded low temperatures as high as 95 degrees in recent days, record for daily minimums in August.

Electricity shortages in regions reliant on a vast network of power-generating dams and reservoirs for energy also come as the Chinese government is debating how — and how fast — to transition away from reliance on coal-fired power to renewable sources.

The faltering supply of hydropower, which last year accounted for about 15 percent of China’s total energy supply, has added urgency to government concern about ensuring sufficient power generation to meet rising consumption — a boon for coal power companies that account for about 60 percent of electricity production.

Chinese President Xi Jinping’s plan for China’s carbon dioxide emissions to peak before 2030 is spurring a massive rollout of wind and solar power. But China’s government has also said that coal — a leading contributor to global greenhouse gases — in the near term will remain the mainstay of national energy production.

“After this crisis, the coal lobby will be saying, ‘this is why you need to have more coal mines and more coal-fired power plants,’” he said. “As in Europe, the key is keeping the lights on and keeping the heating and the air conditioning going. That is the short-term priority.”

After Sichuan’s hydropower output fell below half of its normal level, 67 coal-fired power plants in the province were “firing on all cylinders” to generate as much power as possible as part of China’s emergency response to the power shortage, Chinese state media reported on Tuesday.

Long before China was a leading producer and installer of solar and wind power, it prioritized expanded hydropower production with megaprojects like the Three Gorges Dam, as well as hundreds of smaller generators built across China’s major rivers and their tributaries.

The scale of this investment means swaths of southwest China relies on hydropower for as much as than 80 percent of its electricity and transfers excess energy to eastern provinces. Energy-intensive industries have flocked to provinces like Sichuan to take advantage of easy access to cheap, plentiful and renewable power produced by local dams.

The prospect of reduced energy production from the usually wet southwest in future years could undermine the region’s reliance on hydropower as a carbon-free power source. More-frequent droughts make hydropower an uncertain bet, Andrews-Speed said.

Sichuan’s high reliance on hydropower means that it is hard for other energy sources to make up a shortage in power supply when needed, Lin Boqiang, dean of the China Institute for Energy Policy Studies at Xiamen University, wrote in an article.

“If the frequency of extreme weather increases because of climate change, then the government must actively take responsive measures to diversify the energy structure and improve the electricity grid,” he said.

The concern about hydropower’s reliability is a sharp reversal from the situation at the start of the summer when torrential rain filled Chinese dams and raised hydropower generation.

Turmoil in global energy markets caused by Russia’s invasion of Ukraine has added to China’s long-standing concerns about energy security. After power shortages late last year, the Chinese government responded by ordering coal mines to expand output. As the rest of the world has shunned Russian oil and coal, China has imported record amounts of both.

Beijing’s continued embrace of fossil fuels has drawn criticism from climate change activists that the world’s largest greenhouse gas emitter is failing to transition away from coal fast enough to meet international ambitions to keep global average temperature rises to within 2 degrees Celsius over preindustrial levels.

Part of the problem for Chinese state planners is that energy use per capital in China remains below half of that of many industrialized nations, including the United States, and its total primary energy consumption is unlikely to peak for at least another decade.

Yet, the intensity of extreme weather events in recent years has drawn greater attention to the impact of climate change in China. Even though Beijing for many years has recognized the need to slow global warming, public discussion of the issue had been limited until only a couple of years ago.

That is changing. As climate change moved up China’s geopolitical agenda along with Beijing’s desire to be seen as a global leader on the issue, dramatic scenes of flash floods in central China’s Henan province last summer helped to raise awareness after more than 300 people were killed.

Studies have found that heat waves are increasing in intensity and duration in China, as well as delivering warmer temperatures at night because of human-induced climate change. The increase has been observed in both urban and rural locations. Heat waves are also starting earlier and ending later.

Official rhetoric, too, has shifted toward openly connecting extreme weather events to climatic shifts. Earlier this month, Chen Lijuan from the National Climate Center told local media that global warming meant heat waves were set to become a “new normal,” where high temperatures would arrive earlier and last longer — in a trend that will become “ever more obvious in the future.”