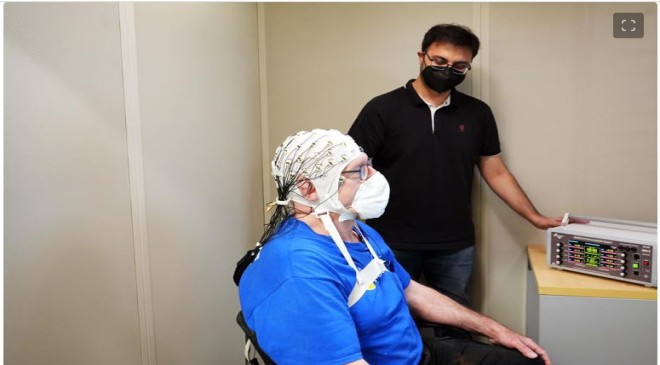 Acap embedded with electrodes that deliver small electric zaps to the brain appeared to boost memory in a group of older adults for at least one month, according to a new study.

The researchers say the technology, the results of which were published Monday in the journal Nature Neuroscience, could one day be used as an at-home intervention for people at risk of dementia to improve memory, when diet and other lifestyle changes alone aren’t enough.

Though both the study’s authors and outside experts say that more work is needed before people could go out and use such a device, there’s an air of excitement around the results.

The findings are “quite remarkable,” said Dr. Gregory Worrell, a neurologist at the Mayo Clinic in Rochester, Minnesota, who was not involved in the research.

“Memory dysfunction is such a common comorbidity of neurologic and psychiatric disease, so these kinds of results could have really wide-ranging applications,” he said.

As people begin to live longer, the approach could become an important tool to protect or even enhance memory in older adults, said senior study author Robert Reinhart, a neuroscientist at Boston University.

More than 16 million people in the U.S., many over the age of 65, have some form of cognitive impairment, according to the Centers for Disease Control and Prevention.

“It’s an unfortunate fact of life that as we age we all become a little more forgetful,” Reinhart said. “Memory deficits impair our activities of daily living, planning, decision making, cognition, learning, and that can generally have a negative effect of diminishing quality of life.”

The new study included 150 people ages 65 to 88 who did not have a diagnosed neurological disorder.

Using the cap, the researchers delivered a weak electrical current to participants’ brains while asking them to recall five lists of 20 words. The process was done for 20 minutes on four consecutive days. Forty people in the study received a placebo treatment — they wore the cap but didn’t receive the electrical stimulation.

The study found that memory performance improved by approximately 50% to 65% in participants who received the four-day intervention. That translated to participants recalling four to six more words, on average, as compared to the group of people receiving the placebo stimulation, according to the researchers.

“This is not a small effect,” Worrell said.

The study also found that the intervention was capable of boosting both working memory and long-term memory. Both types of memory are important — the former helps store information for seconds and minutes, like when you need to remember a phone number. Long-term memory is important for storing information over days, months or years.

Reinhart noted that the research is still in its early stages. Additional studies are still needed to determine whether these effects can last beyond one month, as well as whether these methods can enhance memory performance in people with impaired cognition due to neurodegenerative disorders like Alzheimer’s.

The technology also has limitations. The approach cannot correct for the death of brain cells, something common among people with these disorders, said Shrey Grover, a doctoral student in Reinhart’s lab and the lead author of the study.

However, it’s not the first time researchers have shown that zapping the brain can temporarily improve memory. Worrell, of the Mayo Clinic, published a study in 2018 that found low-intensity electrical stimulation to a specific area appeared to improve verbal short-term memory. Overall, he acknowledged, that previous research on the topic has been a mixed bag.

Dr. Michael Fox, a Harvard Medical School neurologist who was not involved in the research, said the promise of being able to put on a cap 20 minutes a day and enhance cognitive function gets “people excited.”

Still, Fox said he wonders what sort of adverse effects, if any, the method could have on the mind.

“If someone is above the age of 65 and their No. 1 problem is memory, this could still be something that helps and this might be OK if it comes at the expense of some other function that doesn’t bother them,” he said.

The study’s authors said that they did not observe any serious adverse effects over the course of the study.

Grover said participants often experienced itching and a tingling sensation shortly before and after using the helmet. Some people experienced a slight “poking sensation” on their scalp, he said, but they generally found the sensation very manageable.

Wide use one day?

Many researchers in the field expect that the technology could one day be used widely to help those experiencing cognitive impairment.

The technology used in the helmet is relatively cheap and noninvasive, Worrell said, meaning people could one day possibly use the device at home.

There are already similar devices sold at brick-and-mortar stores and online retailers, like Amazon, he said, but none have been approved by the Food and Drug Administration for memory improvement and may not work as advertised.

Grover said the approach could be administered outside of a doctor’s office and combined with existing therapies.

But aside from its potential clinical use, Reinhart said that if the approach becomes available to the wider public, he could see people using it the same way they use caffeine to increase arousal.

“You can imagine a future potentially where people are using stimulation,” he said. “I think people are just overwhelmingly interested in augmenting their ability to provide a kind of cutting-edge advantage.”

Worrell agreed. “It is more expensive than a cup of coffee, but it is really not incredibly expensive,” he said.