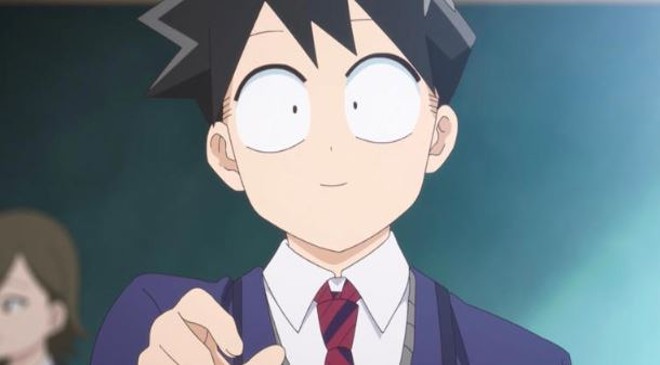 Komi Can’t Communicate is a charming slice-of-life high school anime starring the dandere heroine herself, Komi Shoko, the queen of Itan high school. Komi draws a lot of attention everywhere she goes, and between her and her ultra-extroverted friend Najimi, no one is paying any attention to Tadano Hitohito.

Tadano is a very plain, average boy who does practically nothing to stand out, but there is more to him than his unremarkable exterior would suggest. The reality is that Tadano is an insightful, justice-oriented person who makes a heroic effort to make all his friends happy and maintain balance in their social lives. His astrological sign can explain this in more detail.

Tadano’s birthday is September 29th, and that means he was born under the sign Libra, one of the zodiac’s three air signs. Like the other air signs, Libra is a flexible, creative and people-oriented sign that can improvise solutions and easily form strong connections with lots of people, even if it lacks water’s mysticism and fire’s sheer passion. Libra, in particular, is noted for its refined moral compass and its desire for true justice in the world, hence its sign as a set of scales rather than an animal. Similarly, Libra is ruled by the seventh House — the House devoted to partnership and cooperation — rather than the more self-centered Houses. Moreover, Venus is Libra’s ruling body, representing true love and independence, tying into Libra’s genuine compassion and the desire to do good for others.

There is a lot to like about Libras. Such people are skilled at diplomacy and negotiation thanks to their social inclinations, and they are also team-oriented, considerate towards others and generally artistic. This makes them highly charismatic and easy to like, and they can be calming to be around, even in the middle of a project. Then again, Libras can be frustratingly indecisive, lacking Aries’ fierce confidence and leadership skills, and they can be total pushovers for more aggressive or self-oriented signs such as Leo or Scorpio. Where some signs see a trustworthy friend or partner, others see a weakling worthy only of concept, and the Libra likely won’t stand up for themselves.

Tadano As A Libra In Komi Can’t Communicate

In middle school, Tadano Hitohito tried to stand out as a classic chunibyo, but once a girl rejected him, he immediately switched back to his usual unassuming demeanor. As a true Libra, Tadano is an easygoing, socially inclined boy who has no true desire to steal the spotlight or cause a disruption like a Leo. If the group is happy, so is Tadano, and he expressed this much better in high school than in middle school. In fact, that’s what helped bring him and Komi Shoko together to begin with.

Tadano has incredible intuition and empathy to the point where he seems almost telepathic at times, and those are classic Libra traits. He alone can determine exactly what Komi is thinking, and not even Nakanaka or Ren Yamai can replicate Tadano’s Libra-style intuition like that. Similarly, Tadano is oddly good at picking out gifts for people, focusing on others and what they want rather than his own interests. Tadano is also an easygoing young man who can get along with just about anyone, and he is the one who helped set up Komi with some of her earliest friends such as Najimi and the bookish Agari Himiko. Such social grace and diplomacy is the Libra way.

Tadano also embodies Libra’s weaker aspects, such as its indecisive nature. Aside from supporting Komi, Tadano has no appreciable goals or interests, and that makes him boring to other characters. Similarly, he is weak-willed and easy to push around as a plain guy — something that even his sister Hitomi’s book made fun of with a meta-comment. Tadano is also prone to wallowing in self-pity — a common trait among Libras, though Komi tends to do the same. Both of them feel bad for themselves when they think they’ve let the other one down somehow.