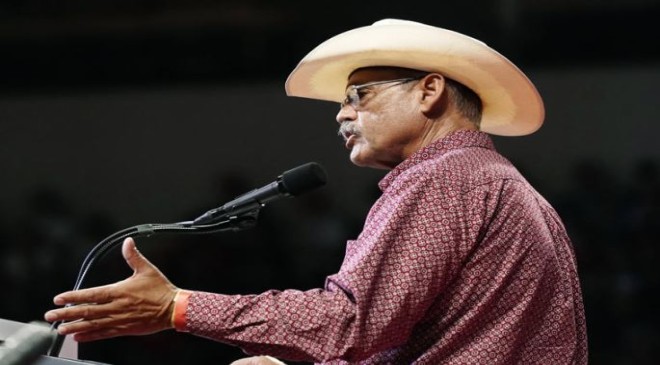 With 99% percent of the expected vote in, Finchem, who was endorsed by former President Donald Trump, had 40% of the vote. State Rep. Shawnna Bolick, another 2020 election denier, had 19% of the vote, while businessman Beau Lane got 25%.

With his win, Finchem, who continues to falsely claim that President Joe Biden did not win the 2020 election in the state, gets one step closer to being the top elections official in Arizona, a crucial swing state where efforts by Trump allies to overturn the last presidential election have persisted in the years since the race.

If elected, Finchem would, as the official who oversees the state office administering the 2024 presidential election, have the power to possibly affect the outcome of the race. Experts say that scenario could contribute to an even more robust effort to overturn a presidential election. Trump is weighing another bid in 2024.

Finchem advances to the general election against the winner of a Democratic race that is still undecided between Adrian Fontes, the former Maricopa County recorder, and state Rep. Reginald Bolding.

Finchem, a member of the Arizona Legislature, is among the most outspoken state lawmakers insisting that Trump won the 2020 election. Trump endorsed Finchem last year, saying in a statement that “Mark was willing to say what few others had the courage to say” about the 2020 race.

At a January rally in Florence, Arizona, Finchem, standing alongside the former president, said, “Ladies and gentlemen, we know it and they know it — Donald Trump won.” Trump held another rally with Finchem, as well as other Arizona Republican candidates, in July, where Finchem and others repeated similarly false claims.

Neither Finchem nor his campaign has responded to multiple emails and phone calls from NBC News requesting a response to questions about his claims about the 2020 election.

As a state legislator, Finchem has introduced several election-related bills, including one that would make all ballots public records, searchable in an online database.

Finchem also introduced several resolutions seeking to decertify the results of the 2020 election in three major Arizona counties, as well as a bill that would give the Legislature the power to reject election results. He supported a partisan review of Maricopa County’s election results, even though the review reaffirmed Biden’s victory.

Finchem has appeared on QAnon radio talk shows and attended the “Stop the Steal” rally in Washington on Jan. 6, 2021, which led to the storming of the Capitol. He also spoke at a “Stop the Steal” event a day earlier, telling the crowd that Trump had won the 2020 election. In a 2014 interview with local news outlet InMaricopa.com, Finchem identified himself as a member of the Oath Keepers, a far-right militia group whose founder was charged with seditious conspiracy and other counts in connection with the Jan. 6 insurrection.

NBC News has reported that the House committee investigating the Jan. 6 riot had subpoenaed Finchem, seeking more information about his claims that the election was “rigged” and his communications with organizers of the “Stop the Steal” rally on Jan. 6.

Finchem is a member of the pro-Trump America First Secretary of State Coalition, which includes election-denying secretary of state candidates in several other swing states, including Jim Marchant (the Republican nominee in Nevada), Kristina Karamo (the Republican nominee in Michigan) and Jody Hice (who lost his race in May in Georgia to Brad Raffensperger). All four of the states are ones in which Biden scored his narrowest victories in 2020.

Biden beat Trump in Arizona by about 10,500 votes, and none of the many lawsuits or audits over the results in the state uncovered any widespread fraud.

With his primary victory, Finchem becomes the sixth Republican secretary of state candidate who denies the results of the 2020 election to advance to the general election, according to States United Action, a nonpartisan group that tracks secretary of state, attorney general and governors’ races.

The other five are Michigan’s Karamo (who was endorsed by the state GOP in April to be the party’s candidate), Nevada’s Marchant, Diego Morales in Indiana, Wes Allen in Alabama, and Audrey Trujillo in New Mexico. According to the group, Finchem was, as of July 28, among at least 20 election deniers who ran for secretary of state in 16 states across the U.S. Also among them are Mike Brown in Kansas and Tamborine Borrelli in Washington. Neither won their primaries on Tuesday night.

If Finchem wins in November, he would, as Arizona’s secretary of state, have the power over the next two years to not only transform how elections are run — in ways some experts say could help possible candidate Trump — but to also tip the scale in a close race, the way Trump asked Raffensperger to do in 2020.

Meanwhile, former prosecutor Abraham Hamadeh, another Trump-endorsed election denier, was competing against five other Republicans, including another election denier, in Arizona’s Republican attorney general primary. The winner will go up against Democrat Kris Mayes in November. Attorney General Mark Brnovich ran for Senate but lost a primary against Blake Masters, NBC News projects.

In addition, Republican Kari Lake was in a tight race for the state’s Republican primary for governor Tuesday. It’s possible Arizona could have election deniers in place in its three top state roles — a trio of positions that oversees, administers, defends and certifies elections and election results.

Arizona’s Democratic incumbent Katie Hobbs will be the Democratic nominee for governor after winning her primary Tuesday.