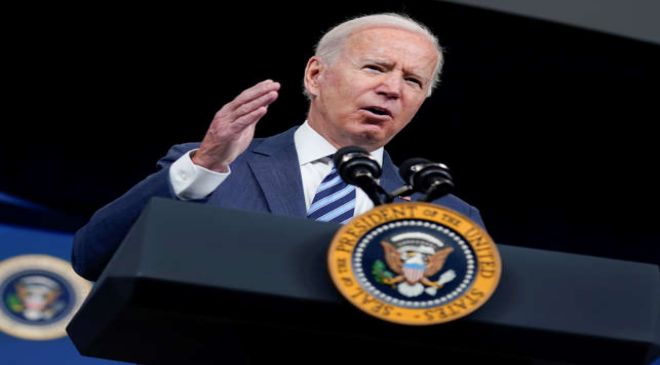 President Joe Biden’s speech at a former coal-fired power plant in Massachusetts led to widespread claims on social media that he made a significant announcement not about climate change, but about his health.

Conservative politicians and political commentators focused on a clip from Biden’s Wednesday speech, in which he told a story about growing up near Delaware oil refineries, to assert that the president announced that he has cancer.

In response, a White House spokesperson confirmed reports that Biden was referring to previously disclosed skin cancer that was removed before he became president — not announcing a new diagnosis.

Here are the facts.

CLAIM: Biden announced that he has cancer.

At one point during his speech, he discussed the impact of environmental pollution from oil refineries near his hometown, sharing an anecdote about his childhood.

“And guess what? The first frost, you knew what was happening. You had to put on your windshield wipers to get, literally, the oil slick off the window,” Biden said, according to a White House transcript of his remarks. “That’s why I and so damn many other people I grew up (with) have cancer and why can — for the longest time, Delaware had the highest cancer rate in the nation.”

Right-wing accounts quickly began sharing a clip of this remark with the claim that Biden was revealing that he had cancer.

“BREAKING: JOE BIDEN ANNOUNCES HE HAS CANCER!!,” a Republican running for Congress in Florida wrote.

“President Biden just said he has cancer. Is it true? Or is the Commander in Chief confused? Who knows!!,” another widespread tweet stated.

But Andrew Bates, a White House spokesperson, confirmed on Twitter that Biden was referring to the publicly disclosed fact that he had skin cancer removed before he became president.

In a November 2021 memo summarizing Biden’s health, Dr. Kevin O’Connor, Biden’s physician for more than a decade, acknowledged that Biden had “several localized, non-melanoma skin cancers removed with Mohs surgery before he started his presidency.”

“These lesions were completely excised, with clear margins,” the report continued.

Though Biden suggested emissions from oil refineries were responsible for his cancer, his doctor previously linked it to sun exposure.

While discussing the cancer in his memo, O’Connor wrote that it is “well-established that President Biden did spend a good deal of time in the sun in his youth.”

This is part of AP’s effort to address widely shared misinformation, including work with outside companies and organizations to add factual context to misleading content that is circulating online. Learn more about fact-checking at AP.