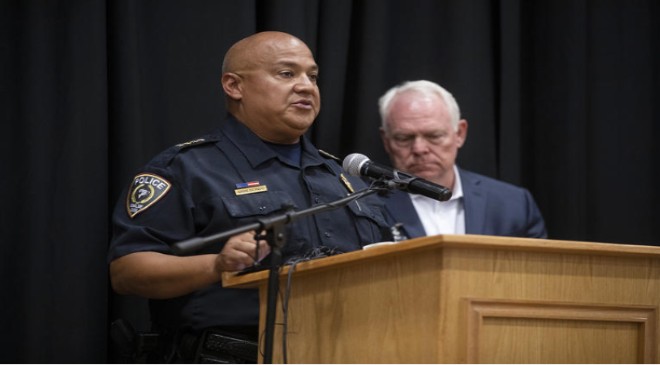 For Albuquerque police, it was another confrontation where suspects defied their orders and paid the price, including death.

But critics, some of whom protested Sunday night, see Thursday’s residential standoff between officers and a suspect who was accompanied by a teenage boy, later found dead, as another example of police who allegedly disregard the lives of people from disadvantaged communities.

“This is one of the most egregious situations of state violence, and that is saying a lot for someone who has been on this work for decades,” Selinda Guerrero, New Mexico field organizer for the nonprofit Forward Together, said by instant message.

Police have mostly defended officers’ actions since the incident, even as their story has evolved and they’ve asked the public for patience and time to determine exactly what happened. “Both individuals were given opportunities to safely exit the house,” the Albuquerque Police Department tweeted Thursday

Police said Thursday that a “noise flash diversionary device” deployed to force the suspect to surrender has been known to spark fires, but that it had never happened before in his city.

The department on Sunday added that officers used other tools during the confrontation: “A drone and robots were used to determine who was inside the house and to activate powder irritants inside the home to get the individuals to exit,” the department said.

The suspect, 27-year-old Qiaunt Kelley, finally surrendered about 3 a.m. as the home went up in flames. He was treated for burns, police said, before being booked Thursday night. The teen, 15-year-old Brett Rosenau, who was not described as wanted or a suspect, never got out.

Police said Sunday he died from smoke inhalation. His body was found among the ashes.

On Sunday, Albuquerque Police Chief Harold Medina allowed the possibility that police may have erred: “If any of our actions inadvertently contributed to his death, we will take steps to ensure this never happens again,” he said in a statement.

Residents of the home where the standoff took place told NBC affiliate KOB of Albuquerque they believe that a flash–bang grenade may have sparked the blaze. They told the station they are homeless as a result of the fire.

A mission to get Kelley in handcuffs started Wednesday when officers found him working on a stolen motorcycle, police said Sunday.

The Albuquerque Police Department initially said he was wanted based on a federal warrant for robbery. But on Sunday it said he was wanted for violating parole granted after he was convicted of charges “related” to carjacking and car theft. Kelley was booked into jail late Thursday based on “warrants,” but the nature of the arrest orders was not revealed.

It wasn’t clear if Kelley has retained an attorney. The public defender’s office in Albuquerque did not immediately respond to a request for comment.

Police on Sunday also tacked on other allegations, some informal and not filed in court. “Detectives later discovered a gun in the car Kelley arrived in,” the department said in its statement.

It said the suspect was also wanted for questioning in connection with a fatal shooting, an incident of automatic weapons fire that prompted an officer to open fire, and a robbery being investigated by federal authorities.

The FBI in Albuquerque has open investigations regarding bank and casino robberies.

Kelley fled from the initial location described by police, though it wasn’t made clear if he was on foot or using a vehicle. He led authorities to the home where the standoff took place, police said.

The teenager somehow “followed Kelley into the home,” the Albuquerque department said in its Sunday statement.

A SWAT team, which includes city and county sheriff’s officers, ultimately responded and tried to coax Kelley out using negotiators and then deploying more coercive methods.

The department has not made it clear if officers knew the teenager, so far an innocent victim, was inside the residence before his death. It’s also not clear if the suspect knew him.

Protests against the department’s actions took place Thursday and Saturday, the latter including the “disruption” of an event attended by Mayor Tim Keller, according to Guerrero.

“No matter what the circumstances were, a boy’s life was tragically cut short, something no person or parent should experience,” Keller said in the Sunday statement released by his police department.

“Every single life is valuable and the loss of any one is devastating to the family and the community,” he said.

Because the Albuquerque department is under a federal consent decree agreed upon in 2014 after the U.S. government determined it had a patter of excessive force, results of all the investigations into the standoff have to be reported to its federal independent monitor, police said Sunday.