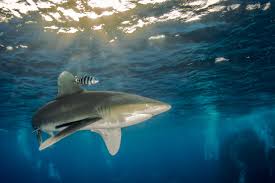 Two women were killed in shark attacks in Egypt’s Red Sea over the weekend, prompting officials to close off a stretch of the coastline.

The Egyptian Ministry of Environment said in a statement Sunday that the women were attacked by a shark while swimming in the Red Sea near the resort town of Hurghada. The governor of the wider Red Sea Governorate, Maj. Gen. Amr Hanafi, has issued an order to suspend all water activities in the vicinity of the deadly attacks, according to the ministry.

The ministry said a committee of specialists has been formed to investigate the circumstances of the incidents and any scientific reasons behind them. The group “is still completing its work to find out precisely the reasons for the behavior of the shark that attacked the two victims,” according to the ministry.

It was unclear whether the same shark was involved in both attacks.

“The Ministry of Environment regrets the accident and extends its deepest condolences to the families of the two victims and extends its sincere thanks and appreciation to all concerned parties for their support,” the ministry added.

The ministry did not release the identities of the two women; however, The Associated Press reported that one was a 68-year-old Austrian woman and the other was a Romanian tourist. ABC News has reached out to the foreign ministries in Austria and Romania for comment.

Shark attacks in Egypt’s Red Sea coastal region have been relatively rare in recent years. In 2020, a 12-year-old Ukrainian boy lost an arm and an Egyptian tour guide lost a leg in a shark attack while snorkelling off the coast of Sharm El-Sheikh, another Red Sea resort town.