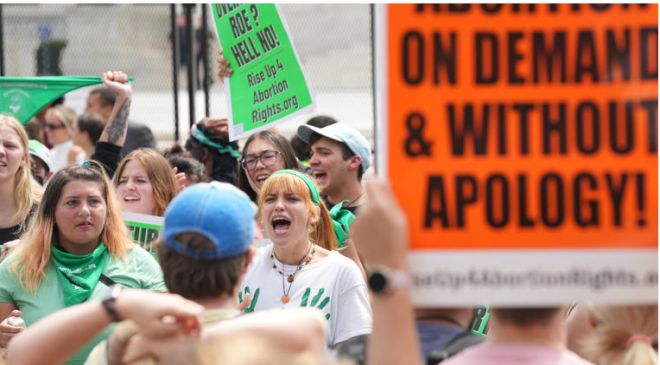 For most Americans, though, abortion has become less a question of morality than one of politics, and Friday’s ruling made it even more so, sending the question of how to regulate abortion back to the states — and into a new and even more polarized political era.

As both sides absorbed the news — stunning, as much as it was long predicted — they were planning for the fights ahead.

“It’s a total victory for the pro-life movement and for America,” said James Bopp Jr., general counsel to the National Right to Life Committee, who has crusaded against abortion since the Roe decision in 1973. “I’m thrilled that the carnage will be abated.”

The job for anti-abortion forces was “half-done,” said Mr. Bopp, who was attending the committee’s convention in Atlanta when the decision was announced. The group is now pushing model legislation to ban abortion in every state, with exceptions only for risks to the life of the mother.

“That’s going to be an enormous task — there will be an array of forces against us,” he said. “This the end of the beginning, as Churchill said once. A huge obstacle has been removed, and now we’re going to make sure that the law is used to protect the unborn.”

For Mini Timmaraju, the president of NARAL, which has fought for the liberalization of abortion law since the 1960s, the concern was for the millions of women in states where abortion instantly became illegal, or where access to the procedure will become much more difficult. “The impact on the real lives of real people will be devastating,” she said.

“This decision is the worst-case scenario, but it is not the end of this fight,” she said. “There is an election in November, and extremist politicians will learn: When you come for our rights, we come for your seats.”

Alexis McGill Johnson, the president of Planned Parenthood, long the country’s most well-known provider of abortions, said, “The Supreme Court has now officially given politicians permission to control what we do with our bodies, deciding that we can no longer be trusted to determine the course for our own lives.”

State legislatures had been anticipating the court’s move for months, if not years, with increasingly tight restrictions that have made abortion effectively unavailable to millions of women in the a wide swath of the country. The decision on Friday, which had been foreshadowed in oral arguments in December and again when a draft opinion was leaked in May, triggered near-total bans on abortion in 13 states. In Missouri, the attorney general issued an opinion banning abortion within 15 minutes of the announcement by the court.

The ruling opened an immediate split screen view of a polarized nation. From the halls of Congress to the crowds on the steps of the Supreme Court and people on their way to work across the country, there was jubilation and relief on one side, outrage and grief on the other.

Senator Mitch McConnell, the Republican leader who has maneuvered his party to shape courts that would overturn Roe, celebrated the ruling as “courageous and correct.”

“Millions of Americans have spent half a century praying, marching and working toward today’s historic victories for the rule of law and for innocent life,” Mr. McConnell said. “I have been proud to stand with them throughout our long journey and I share their joy today.”

In Louisville, Ky., in Mr. McConnell’s home state, Louis Monnig, a 32-year-old obstetrician and gynecologist, was reloading his social media feed when he saw the decision. “I feel like someone that’s close to me has died,” he said.

He was headed to work knowing that his state’s trigger law would criminalize abortion immediately. He had already begun texting his colleagues to brainstorm on how to meet patients’ needs. “That’s one reason why I went into obstetrics and gynecology,” he said, “because I felt morally compelled to be part of this, and to provide care for all parts of the spectrum of reproductive health.”

Millions of Americans like Dr. Monnig have never known a world without the constitutional right to abortion. In Kansas City, Mo., Mallorie McBride said she was “shocked and horrified” at the Supreme Court decision.

“We’re taking so many steps back,” she said. “I’ve always been a believer that older men should not be making decisions about women’s bodies. As a single woman in my 20s, I haven’t felt very represented by my government in a while, but this takes it one step further.”

The politics of abortion have become more angry and divisive over the past 10 years, reflecting the increased polarization of the country. In the Supreme Court’s decision, Justice Samuel A. Alito Jr. argued that Roe v. Wade had “sparked a national controversy that has embittered our political culture for a half century.” But overturning Roe and returning the question of abortion to the states seemed guaranteed to make politics even more bitter.

Troy Newman, the president of Kansas-based Operation Rescue, which staged a long campaign of blockades outside abortion clinics, said the decision still left too much latitude for states like his, largely led by Democrats, to allow abortion.

“It is now time for the pro-life movement to pull up our big-boy boots and win the rest of the states,” he said. “We will be mopping up, putting the remaining dirty, disgusting abortion mills out of business.”

Becky Currie, the Republican state representative in Mississippi who wrote the state’s abortion legislation that resulted in the court’s decision, said: “I think God has had his hands in this from the very beginning. It should be a happy day for us all.”

“Now the work begins,” she said. “We need to be there for them to make sure birth control is available. We need to make sure homes are available for babies to be adopted.”

In Conway, Ark., Stacey Margaret Jones, 52, said she kept thinking about the women she encountered when she volunteered at Planned Parenthood.

“I feel really hopeless because I feel like there’s nothing I could have personally done differently,” Ms. Jones said. She has donated to candidates who support abortion rights, attended marches and written to her legislators. But in a conservative state like Arkansas, she does not feel like her voice is heard. Her state senator is Jason Rapert, a lead sponsor of Arkansas’s abortion trigger law that outlawed the procedure following the court’s decision.

“I’m looking for guidance from somebody or some organization to say, ‘OK, we knew this could happen and this is what we’re going to do,’” Ms. Jones said.