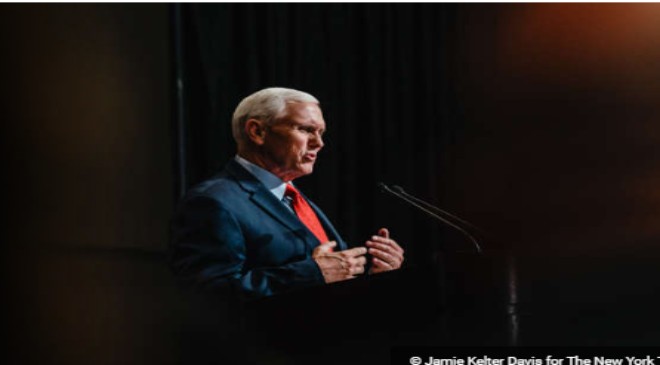 Former Vice President Mike Pence has emerged from the Jan. 6 hearings in a peculiar position.

To some Democrats in Congress, he has become something of a hero for resisting Donald J. Trump’s pressure campaign to overturn the 2020 election at a time when American democracy seemed to teeter on the brink. To Mr. Trump and his political base, Mr. Pence is a weakling who gave away the presidency. And to a swath of anti-Trump voters in both parties, he is merely someone who finally did the right thing by standing up to his former boss — years too late, after willingly defending or ignoring some of Mr. Trump’s earlier excesses.

The whipsaw of images creates an uncertain foundation for a potential presidential campaign, for which Mr. Pence has been laying the groundwork. Yet the former vice president is continuing with his travels around the country in advance of the 2024 primaries, as he navigates his fraught positioning.

Much as he did after the 2020 election, when he tried to keep his tensions with Mr. Trump from becoming public only to have him push them into the light, Mr. Pence continues to walk a tightrope, trying to make the best of a situation he didn’t seek without becoming openly adversarial to the president with whom he served and who remains the leader of the Republican Party.

Mr. Pence himself has said little about Jan. 6, though his aides have testified about his resolve as Mr. Trump and his allies tried to press him to subvert President Biden’s victory. On Monday, in an economic speech at the University Club of Chicago, Mr. Pence sounded very much like a candidate — but not much like someone interested in discussing the specifics of what he lived through on Jan. 6.

“We’ve all been through a lot over the last several years,” Mr. Pence told the audience. “A global pandemic, social unrest, a divisive election, a tragic day in our nation’s capital — and an administration seemingly every day driving our economy into the abyss of a socialist welfare state.”

Insights into Mr. Pence’s mind-set at the time have come largely from the testimony of his former chief of staff, Marc Short, and of his former counsel, Greg Jacob. Mr. Pence, as he made clear in his Chicago speech, has kept his sights trained on the Biden administration and on electing Republicans, including Gov. Brian Kemp of Georgia and others who were sharply at odds with Mr. Trump, in the midterms. If Mr. Pence has sharper things to say, he may not do so until the fall, when he has a book coming out.

“The situation Mike Pence faces is a political briar patch,” said David Kochel, a Republican strategist who worked on Jeb Bush’s presidential campaign in 2016. “The more he’s praised by Democrats and the media for doing the right thing on Jan. 6, the more some in Trump’s base grow skeptical of his loyalty to the Trump team.” He added, “There is no upside for him to lean into any of this.”

Later on Monday in Peoria, Ill., Mr. Pence called on Republicans to focus on the future and not the 2020 presidential election, an indirect reference to Mr. Trump’s incessant focus on his election loss that continues to this day.

“In the days between now and Election Day, let’s cast a positive vision for the future for the American people,” Mr. Pence told a crowd of Republican activists at a Lincoln Day dinner. “Yes, let’s be the loyal opposition. Let’s hold the other side accountable every single day. In the days between now and Election Day, we need you to say yes — yes to the future, yes to a future of freedom and our cherished values. And the Republican Party must be the party of the future.”

Three times Mr. Pence lauded accomplishments of “the Trump-Pence administration” and he related a story from his high school reunion about a former classmate who encouraged him by telling him, “We need you guys back.”

During the speech, Kathy Sparrow, the chairwoman of the Republican Party of Hancock County, Ill., shouted “Pence for president!” Mr. Pence ignored the shout.

“Trump had his turn,” Ms. Sparrow said after Mr. Pence’s remarks. “It’s time for Pence to step up and run.”

The attention on Mr. Pence provides both potential benefit and peril as he considers running for president.

Paeans from Democrats certainly do not help him, but his actions before, during and after Jan. 6 give him an opportunity to differentiate himself in what could be a crowded primary field, one that may include Mr. Trump. Mr. Pence, whose support for Mr. Trump helped allay concerns about him from evangelical voters in 2016, has the advantage of starting as a known entity to the Republican base.

Mr. Pence has tried to stake out a lane for himself by representing the aspects of the Trump White House that appealed to conservatives but without the coarse and sometimes abusive behavior from Mr. Trump that they grew weary of. But this approach has been complicated by the fact that the loudest praise for Mr. Pence has come from Democrats who voted to impeach Mr. Trump.

“In a time of absolutely scandalous betrayal of people’s oaths of office and crimes being committed all over the place, somebody who does their job and sticks to the law will stand out as a hero on that day,” Representative Jamie Raskin, Democrat of Maryland and a member of the House select committee investigating the Jan. 6 attacks, said on NBC News’s “Meet the Press” on Sunday. “And on that day, he was a hero.”

Many other Democrats, however, have resisted the idea that Mr. Pence — who is known as cautious and loyal, and who did not break with Mr. Trump until the very end — should be praised, particularly as he considers campaigning to be the next president.

“Pence is currently on his own political rehab tour, hoping he can wash the stink of being Trump’s vice president off,” the Arizona Democratic Party said in a blast email when Mr. Pence made a trip to the southern border in that state recently. “But we know just because Mike Pence didn’t give in on January 6 doesn’t change the fact he missed multiple opportunities to do the right thing for 4 whole years.”

Other Democrats, including the members of the Democratic National Committee, have highlighted that Mr. Pence adhered closely to Mr. Trump without wavering during some of the biggest controversies of his presidency, including his first impeachment, and that Mr. Pence did not speak publicly about his views until moments before the election certification began on Jan. 6.

Nonetheless, even some of the harshest critics of the Trump era have said that the actions of Jan. 6 should not be treated lightly.

“It’s true that for months before the election and weeks after, Mike Pence played along with Trump’s baseless election conspiracies,” said David Axelrod, a former top adviser to former President Barack Obama. “He certainly didn’t dissent. But, at the end of the day, he’ll be remembered for one critical moment when he resisted enormous pressure and literally put his life on the line for our democracy. And, for that, he deserves all the accolades he’s received.”

The complaints from Democrats have focused not just on his tolerance for Mr. Trump’s norm-shattering behavior but also for the administration’s policies. Mr. Pence’s aides say he believed the administration was enacting policies he generally agreed with, including putting forward conservative nominees for three Supreme Court seats. His long loyalty to Mr. Trump could resonate with some Republicans, but, with the former president demanding total fealty, it is a difficult line to walk.

“The irony is that Pence was arguably the primary enabler of Trump,” said Rob Stutzman, a Republican strategist based in California. “He was the mainstream traditional conservative Republican who would go to donors and not just defend Trump and his policies, but with a straight face insist that Donald J. Trump was a good man.”

Mr. Short, Mr. Pence’s former chief of staff, has been critical of aspects of the House committee’s work, at a time when Mr. Trump has encouraged his supporters to view the panel as illegitimate. That has allowed Mr. Pence to keep some distance from the work of the committee, which he has not appeared before himself.

Officials are expected to try again to ask Mr. Pence to testify, a move he will most likely resist. On Sunday, Representative Adam Schiff, Democrat of California and a committee member, left open the idea that requesting his presence may still happen.

“Certainly a possibility,” Mr. Schiff said. “We’re not excluding anyone or anything at this point.”