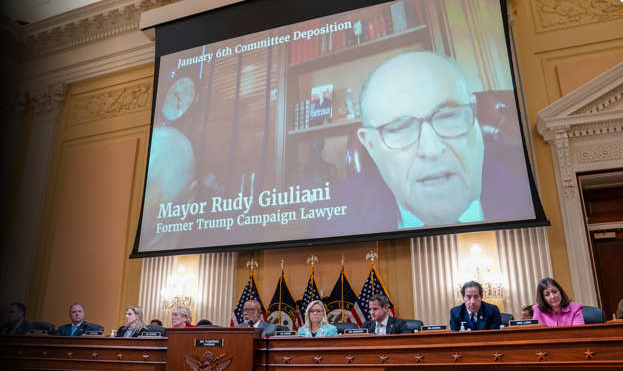 We’ve seen just two relatively brief hearings of the House Jan. 6 committee. Yet already members of President Donald Trump’s inner circle are accusing one another of lying under oath, taking bribes from Democrats, shilling for Marxists and being past their primes. They’re also rekindling old scandals involving their onetime allies and have been shown questioning each other’s mental faculties (including Trump’s). And in one case, we’ve found out a White House lawyer angrily told a Trump campaign lawyer that he should “get a great effing criminal defense lawyer; you’re going to need it.”

The Jan. 6 committee’s work might never lead to criminal charges against Trump or those around him. But it has certainly revealed — and prompted — some extraordinary sniping and infighting.

Perhaps the most pronounced example came Tuesday morning, when Rudy Giuliani effectively accused two top Trump campaign aides, Jason Miller and Bill Stepien, of perjury. Miller had said under oath that Trump’s former attorney was “definitely intoxicated” on election night 2020. (Stepien didn’t say this, though Giuliani apparently believed he had.) Giuliani also suggested they might have taken bribes for testifying to that effect.

Giuliani later deleted the tweets. (Some had noted the accusations could be grounds for defamation lawsuits. And another former White House aide, Alyssa Farah Griffin, confirmed Tuesday that Giuliani “appeared inebriated” on election night.)

But Giuliani didn’t leave it there. He later retweeted someone who pointed to a 2018 story about Miller being accused of slipping an abortion pill into his girlfriend’s smoothie. Miller denied the accusation at the time and sued those who promoted it, but the case was dismissed. (Miller didn’t respond to a request for comment Tuesday.)

Both tweets were also apparently deleted.

The other big clash to emerge from Monday’s hearing was between Trump and his former attorney general, William P. Barr. The committee on Thursday and again on Monday played clips of Barr repeatedly deriding Trump’s and his allies’ voter-fraud claims in stark terms. On Monday, they added clips of Barr saying he informed Trump that his theories were bogus — something that could be legally significant.

Trump spokeswoman Liz Harrington responded to this by accusing Barr of being a “cowardly RINO” and a “shill” for “Marxist Democrats” — a pretty remarkable allegation when you consider how much Barr bent over backward for Trump. (Trump also criticized Barr in terms he often uses for loyalists-turned-critics.)

Barr’s testimony also got the goat of Dinesh D’Souza, whose thoroughly criticized film “2,000 Mules” currently forms the basis of Trump’s and his allies’ claims of a stolen election. Barr laughed dismissively and demonstratively when he brought up the film. He said its “premise” — that people who were geolocated near multiple ballot drop boxes might be illegal ballot-harvesting “mules” — was “indefensible.”

It was telling that Barr, who during the 2020 election warned repeatedly of potential ballot-harvesting operations, would treat the subject so derisively. On Twitter, D’Souza accused Barr of “stunning” ignorance.

D’Souza wasn’t the only one whose ability to parse fraud allegations Barr seemed to have little regard for. In his testimony, Barr noted Trump himself seemed unmoved by having his voter-fraud theories debunked by his attorney general, which Barr called demoralizing; to him, it appeared Trump had “become detached from reality if he really believes this stuff.”

That’s potentially a fruitful legal defense for Trump — that he actually, somehow, believed this stuff as he was pressing to overturn the election. That could undermine the idea that Trump was acting “corruptly,” despite being repeatedly told his claims were false.

But the fact remains that the attorney general was suggesting the former president had gone off the deep end. (He at one point seemed to be about to say Trump had “lost contact with” reality, before scaling it back to “detached.”) And that would seem pretty politically important.

Nor was Barr the only one to express exasperation: Trump White House lawyer Eric Herschmann, in testimony played Monday, also seemed perplexed at what Giuliani and Sidney Powell, another member of the Trump legal team challenging the election, were saying about voter fraud.

“[Giuliani’s] theory was also completely nuts, right?” Herschmann said. “It was a combination of the Italians, the Germans — I mean, different things have been floating around as to who was involved. Remember Hugo Chávez in Venezuela? And [Powell] has an affidavit from somebody who says he wrote a software in — something with the Philippines — and just all over the radar.”

It wasn’t the only time Herschmann would speak derisively of Giuliani. Like Stepien, who said he was glad to be associated with “Team Normal” rather than Giuliani’s team, Herschmann suggested at one point that Giuliani wasn’t up to the task of managing such an effort “at this stage of his life.”

And at the end of Monday’s hearing, the Jan. 6 committee also played some choice Herschmann words for another of Trump’s lawyers, John Eastman, the architect of the Jan. 6 strategy. Herschmann said he told Eastman on Jan. 7, the day after the insurrection, “Are you out of your effin’ mind?” and “I only want to hear two words coming out of your mouth from now on: ‘orderly transition.’ ”

And on Tuesday, the committee released yet more of that portion of Herschmann’s testimony, in which he said he told Eastman, “Now I’m going to give you the best free legal advice you’re ever getting in your life: Get a great effing criminal defense lawyer; you’re going to need it.”

Almost none of these people, of course, volunteered any of this information before Jan. 6 or during Trump’s impeachment — though Barr did publicly say the evidence of fraud was insufficient to change the results. But one of the benefits of launching an investigation and getting people under oath is forcing them to say what they really thought of one another and what was happening in real time. And the prevailing message thus far is that lots of people knew Trump’s push to overturn the election was completely untethered to reality.

It also suggests there will be plenty for all of them to fight over in the coming days and weeks, as the committee reveals even more that was previously obscured.