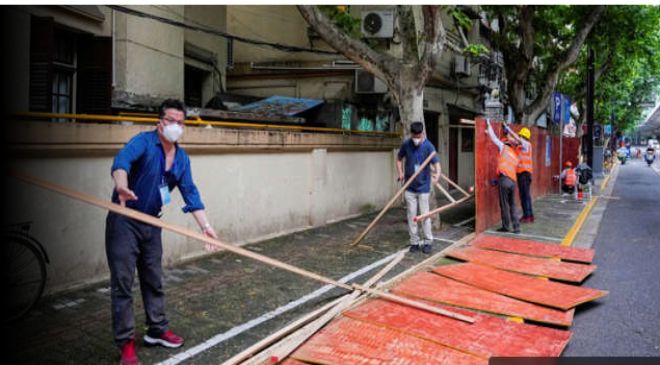 Chinese Premier Li Keqiang last week urged a reported 100,000 local government officials to immediately take action to “stabilise” the situation in China amid upset and anger over the fallout from its commitment to ‘zero COVID’.

Speaking over video link at a State Council executive meeting, Li said China’s economy was facing an even greater challenge than at the start of the pandemic in 2020, according to Xinhua, China’s state news agency, when employment, industrial production and consumption all tumbled.

It was an extraordinary appeal from the premier, a trained economist who has spent much of his two terms in office sidelined despite holding the second most powerful post in China.

Online, the meeting was also compared by some to a 1962 summit where Communist Party officials admitted the failure of the Great Leap Forward, a disastrous campaign to modernise China’s economy that led to a brutal famine, according to the China Media Project.

While the meeting speaks volumes about anxieties within China’s Communist Party about the country’s economic future, Li’s re-emergence into the spotlight may also indicate concerns about the future of China’s political system, as well.

Once seen as a potential candidate for president from the faction of former President Hu Jintao, Li has been largely side-lined as premier since taking office nearly a decade ago.

He recently was given the responsibility of overseeing China’s pandemic response, but its controversial ‘zero COVID‘ policy is credited to President Xi Jinping, who appears unwilling to countenance anything less than total victory over the virus.

Zero COVID, however, has placed Xi in political hot water.

The policy has kept tens of millions of people under some form of lockdown since the start of the year and also strangled some of China’s most important industries including manufacturing.

Shanghai, China’s most important economic city and home to many of the country’s elite, is only just coming out of a lockdown that began at the end of March.

Beijing appears to be under lockdown in all but name.

Reading between the lines

Li’s recent forum and his re-emergence may also signal issues at play beyond economics, according to analysts.

The upper echelons of China’s Communist Party are notoriously opaque but well-publicised events and subtle signals in the state-run People’s Daily can give a window into the Party’s thinking.

The recent signals, however, have been confusing for analysts like David Bandurski, the co-director of the China Media Project. After lionising Xi for many months, the president was absent from the front page of the People’s Daily newspaper five times in May – just below the unofficial threshold that something may be afoot, Bandurski said.

Li, by contrast, has been slightly more visible as state media shared a transcript of his economic summit on social media, further intensifying speculation.

“From late April through May, corresponding to new questions over the handling of COVID in Shanghai and pressures on the economy, the signals have to some extent been mixed. It has no longer been all Xi all of the time,” Bandurski told Al Jazeera by email.

“This has led to speculation that perhaps Xi is facing headwinds within the Party over his handling of the crisis – and that this might be an opportunity for Li, who may have very different ideas about where to go with the economy.”

Bandurski said internal Party thinking may become more clear in June and July ahead of the 20th National Party Congress, where Xi is expected to seek an unprecedented third term in office after clearing the way constitutionally in 2018. For now, he said, the media is just as likely to be expected to glorify Xi as it is to project a more ambivalent message from the Party.

Adam Ni, the co-founder of the China Neican newsletter, also said Li’s sudden re-emergence back in the spotlight would suggest that some factions within China’s leadership are concerned about Xi’s third term and the impact of his zero COVID policy.

Ni said, however, it would be a mistake to think that Li is now able to counterbalance Xi, who has spent his first two terms in office building up personal power at the expense of his premier.

“I think Xi is probably making a tactical retreat on economics, so letting Li shoulder the economic troubles, if things go wrong then you’ve got the premier to blame, and if it goes right then it’s to the benefit of Xi, and it eases some of the internal pressure,” Ni said.

For Li, his re-emergence into the spotlight could also give his political career greater longevity.

“It has always been our baseline assumption that Li Keqiang would stay on in some capacity after the 20th Party Congress – most probably as head of the legislature,” said Trey McArver, a partner at the foreign policy startup Trivium China.

“I do think that the recent criticisms of Xi and his handling of the economy strengthen Li’s hand and make it more likely that he will stay on. We currently assess that he has a 67.2 percent chance of doing so.”