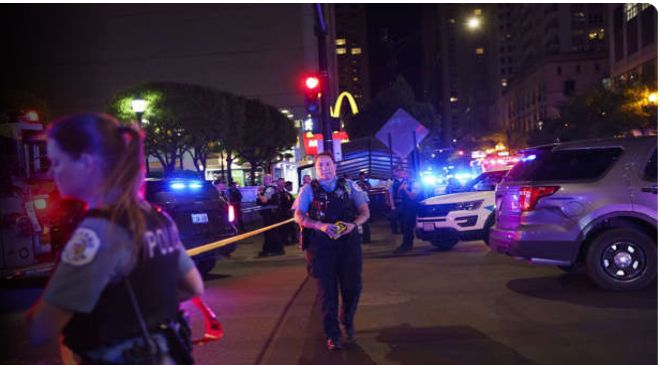 Six people were shot, including one who has died late Thursday in the 800 block of North State Street, blocks from the Magnificent Mile, authorities said.

Another person had suffered burns, possibly from being injured on the nearby CTA Red Line subway, according to a witness and a Chicago Fire Dept. spokesman.

The shooting happened about 10:40 p.m. outside the Chicago Avenue subway station and a McDonald’s in the 800 block of North State Street, Chicago police said in a media notification.

As of early Friday, one person had died and at least five others were wounded, police said.

One victim was in “grave” condition and the other gunshot victims were all in serious to critical condition, Hernandez said.

They were taken to Illinois Masonic, Stroger, and Northwestern Memorial hospitals, Hernandez said.

A Red Line train traveling through the area was halted between stations while authorities searched for a weapon in the subway’s rails, Hernandez said, adding the department evacuated the CTA passengers at about 11:30 p.m.

Shortly before then, responders were seen removing people — at least two who appeared to be badly injured — from an area between a McDonald’s and a CTA station on the northeast corner of State Street and Chicago Avenue.

Amid the chaos of the shooting’s aftermath, a woman yelled at officer standing near the station entrance, “What hospital? My brother got shot!”

As paramedics and officers worked the scene a fight erupted between two people across the street. Shortly after 11:15 p.m. a group crossed a line of police tape and argued with a officers before they were pushed back.

Two women were among those taken away on stretchers. One was sitting up and silent as paramedics lifted her into an ambulance.

Deonna Jackson, 18, had come downtown to hang out with her friends.

“I was getting off the train and I spotted a group of teens fighting,” Jackson said.”I’m kind of used to that happening right here but I just don’t involve myself.”

Jackson separated herself from the tussle and “made it to the corner.”

That’s when a girl approached her, asked what was happening and then asked Jackson for her help, explaining that she was trying to find her friend who may have been invovled in the fight.

But then someone in a car pulled up to them and she “found her people,” said Jackson, who began making her way to the 7-Eleven across the street.

“All of a sudden shots went off,” Jackson said. “I flew inside of the store (7-Eleven).”

Jackson said when the hail of gunfire halted, she ran outside to try and help the victims.

“I ran toward the people who were lying on the street,” Jackson said. “They (victims) were on the sidewalk in front of the McDonald’s.”

Jackson said at least one person shot appeared to be man in his 20s while many others were likely people in their teens. Jackson recognized another victim as a possibly homeless woman about 60, who regularly asks for change at that corner.

The person who suffered burns was possibly injured from the CTA’s third rail, according to Jackson.

No suspects were in custody, Chicago Police spokesman Tom Ahern said in a Tweet just after 11 p.m.