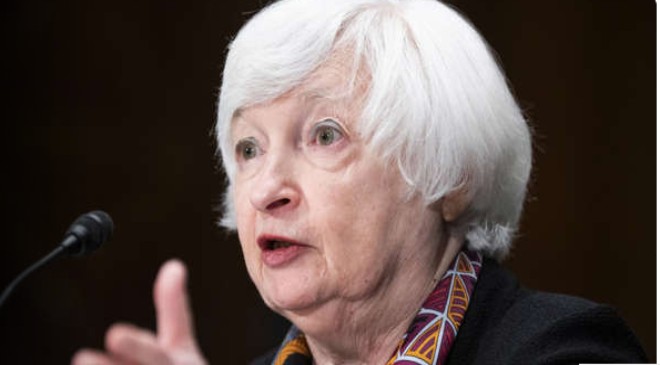 May 10 (UPI) — Treasury Secretary Janet Yellen said on Capitol Hill Tuesday that global fiscal growth is volatile and uneven due to the ripple impact of COVID-19 around the world and the Russian war in Ukraine — and cautioned that banning abortion in the United States would also create economic harm.

Appearing before the Senate banking committee to outline the Treasury’s budget needs, Yellen said that both global events are the two main outside factors affecting the U.S. economy.

Although the domestic economy has made strides in the two years since the arrival of the pandemic, the Treasury chief told the panel that it’s still deeply ingrained in world markers and the fighting in Ukraine is disrupting the normal flow of business.

“There is the potential for continued volatility and unevenness of global growth as countries continue to grapple with the pandemic,” Yellen said. “Russia’s unprovoked invasion of Ukraine has further increased economic uncertainty.”

“The U.S. financial system has continued to function in an orderly manner, though valuations of some assets remain high compared with historical values,” she added. “We stand firmly with the people of Ukraine and have implemented an unprecedented suite of sanctions on Russia that have been implemented by financial institutions.”

Yellen, who was the first chairwoman of the Federal Reserve, said at Tuesday’s hearing that she’d expect that overturning Roe vs. Wade would lead to fewer women in the workforce and harm to the U.S. economy. Pool Photo by Tom Williams/UPI

Yellen, who was the first chairwoman of the Federal Reserve under President Barack Obama between 2014 and 2018, also told lawmakers on the panel that overturning the Supreme Court’s landmark abortion ruling in Roe vs. Wade would have an unforeseen negative impact economically.

“I believe that eliminating the right of women to make decisions about whether to have children would have very damaging effects on the economy and would set women back decades,” she said.

Yellen explained that legalized abortion led to noticeable increases in female participation in the U.S. workforce — and that striking down the 1973 ruling could have a similar impact in reverse.

Yellen was asked about her opinion on the issue in light of a leaked Supreme Court opinion last week that indicated the court is planning to overturn the Roe vs. Wade decision. If the high court dismisses the ruling, each state would have to determine on their own whether the practice is legal. A number of Republican-led states like Texas, Missouri and Iowa have already moved to ban abortion.

“Denying women access to abortion increases their odds of living in poverty or need for public assistance,” she said.

Yellen was also asked about rising inflation in the United States, and said that rising prices in the United States may be at or near its peak. She said the Federal Reserve increasing interest rates last week should begin to show dividends soon — but cautioned that a new round of COVID-19 lockdowns in China could revive the same supply chain issues that disrupted the global economy for nearly two years.

Similarly, the Treasury chief pointed to climate change as another area that could significantly impact the U.S. and world economies without measures to mitigate its impact.

Sen. Pat Toomey, R-Pa., pushed back against that assessment — instead pointing to cybersecurity as a more significant concern.