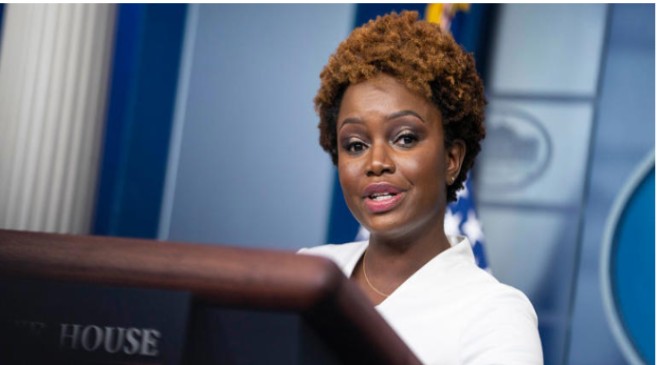 During the press announcement, Psaki praised Jean-Pierre, calling her a “partner of truth,” adding that “representation matters, and she will give a voice to many, but also make many dream big about what is truly possible.”

“I am still processing it because, as Jen said, at the top, this is a historic moment, and it’s not lost on me,” Jean-Pierre said in response to Psaki’s comments. “I understand how important it is for so many people out there. So many different communities that I stand on their shoulders. It is an honor and a privilege to be behind this podium,” per CNN.

Biden also released a statement of his own saying that Jean-Pierre “not only brings the experience, talent, and integrity needed for this difficult job, but she will continue to lead the way in communicating about the work of the Biden-Harris Administration on behalf of the American people.”

Read on for everything to know about the new White House press secretary and her family.

She was born in Martinique.

Jean-Pierre was born in Fort-de-France, Martinique, a Caribbean island just north of Barbados and St. Lucia, according to Forbes. She later immigrated with her parents to Queens, New York, where she grew up. Jean-Pierre currently lives in Washington, D.C., with her partner Suzanne Malveaux and their daughter.

Jean-Pierre graduated from the New York Institute of Technology and Columbia’s School of International and Public Affairs, according to the New York Times.

Before joining the White House press team, Jean-Pierre was chief of staff to Vice President Kamala Harris during the 2020 campaign. She has been in the media world for a long time, serving as a political analyst on MSNBC and NBC, and also worked on Obama’s re-election campaigns. Jean-Pierre was the national spokeswoman for MoveOn.org, a federal political committee, in 2016, per BBC News.

Her partner is a news correspondent.

Suzanne Malveaux currently works as a CNN correspondent, covering national and international news as well as cultural events, per CNN. Before joining the news outlet in 2002, she worked for NBC in Chicago and D.C.

But with Jean-Pierre’s new role, her partner will stop covering politics to avoid a conflict of interest. “Suzanne Malveaux will continue in her role as CNN National Correspondent covering national/international news and cultural events but will not cover politics, Capitol Hill, or the White House while Karine Jean-Pierre is serving as White House Press Secretary,” CNN spokesman Matt Dornic confirmed to Women’s Health.

The couple has a daughter together.