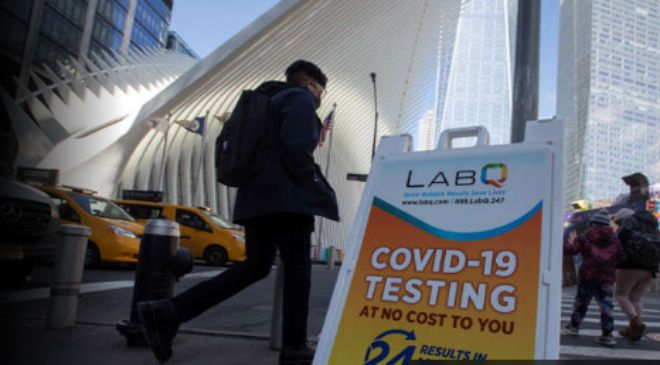 The immune-evading, highly transmissible Omicron variants BA.4 and BA.5 are likely in every U.S. state, an expert told Fortune, after the U.S. Centers for Disease Control released a list of 14 states where the virus had been identified.

On Monday the U.S. Centers for Disease Control provided Fortune with a list of where probable positive tests were located. The locations were widespread, ranging from California on the West Coast to Missouri and Ohio in the Midwest and Maine, Washington, D.C., and New York on the East Coast.

“The dispersion tells us they’re already present across the U.S. and we just haven’t detected it yet in any states that haven’t been named,” Dr. Phoebe Lostroh, a Harvard-trained microbiology professor at Colorado College in Colorado Springs, Colo., told Fortune.

Locations where probable cases of BA.4 have been identified, according to the CDC

Locations where probable cases of BA.5 have been identified, according to the CDC

A CDC spokesperson said the probable positives represented less than 0.1% of circulating virus samples collected the week ending 16 April. But lab testing is down throughout the U.S., and only a small fraction of tests received by a lab are genetically sequenced, Lostroh said, adding that some European countries and even South Africa have better sequencing capabilities than the U.S., especially when factors like population size are considered.

Still, it’s unsure if the new subvariants will take hold in the U.S. like they have in South Africa, where they’re causing a probable new wave, Alex Sigal, a professor at the Africa Health Research Institute in South Africa, told Fortune on Sunday. He’s one of the authors on a new study that found BA.4 and BA.5 can evade Omicron antibodies, both from vaccination and earlier infection.

Madison Stoddard, a COVID-19 researcher at drug development firm Fractal Therapeutics, cites the example of the COVID strain Beta, which swept South Africa but failed to take off in the U.S. for unknown reasons.

“The Beta variant was very successful in the South African population and we didn’t see it spread very widely in the [United] States,” they told Fortune on Friday. “The contact patterns are different, the nature of immunity is different in different populations. There’s no guarantee we’ll have the same outcomes South Africa has seen with these particular variants.”

While the results sound alarming, “an eight-fold difference for this kind of test in terms of immune response is statistically significant but won’t have a big impact compared with what you can measure,” Lostroh said, adding that differences of thousands-fold and even millions-fold can be detected.

“An eight-fold difference is tiny,” she said.

The symptoms of BA.4 and BA.5 so far line up with previous Omicron symptoms, Sigal said, including fever, loss of smell, and malaise.

“I haven’t seen early symptoms of respiratory distress, the major COVID-specific symptom that makes this disease so dangerous,” he said. “It doesn’t feel nice, but there’s less chance of dying.”

Sigal doesn’t expect a huge wave, given that earlier strains of Omicron have infected so many worldwide. He also doesn’t expect “a very severe wave in terms of disease severity,” he said, given the measure of protection—albeit reduced—that vaccination and/or prior Omicron infection will offer.

“Infections? Yes,” he said. “Disease severity? Not so much.”

On Monday, South Africa saw nearly 3,000 new cases out of nearly 47,000 active cases, according to the National Institute for Communicable Diseases. The country’s percent positivity rate—or rate of those who tested and whose results came back positive—sat at 21%. The World Health Organization initially recommended levels of below 5% for communities wishing to reopen after COVID’s first wave.

On Sunday the U.S. had a daily average of roughly 56,000 new cases, according to the CDC. Its percent positivity was roughly 6% in late April.