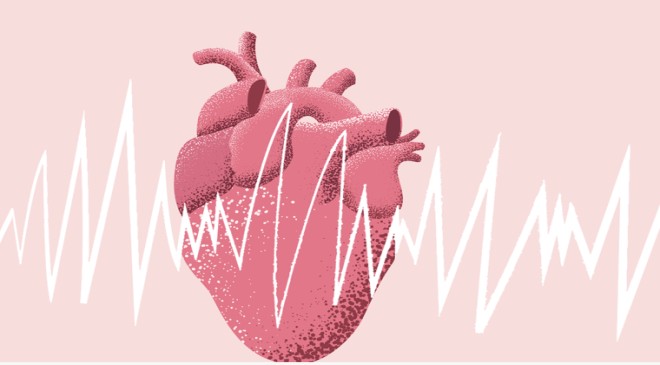 Heart failure is one of those conditions that you rarely (or ever) think about—until it personally affects you. Maybe someone you love was recently diagnosed with heart failure or your doctor warned you about it during a recent physical. Whatever the reason it’s on your radar, heart failure sounds pretty scary. You might think it means that your heart suddenly stops working, but heart failure is actually a gradual process in which your heart doesn’t work as efficiently as it should, and it affects roughly 6.2 million people in the U.S., according to the Centers for Disease Control and Prevention (CDC). Here’s everything you need to know about this condition, including what causes heart failure in the first place.

What is heart failure?

Your heart is tasked with a big job: pumping oxygen and nutrients to all of your organs. Heart failure happens when your heart muscle can’t keep up with the demands of its role, and the rest of the body starts failing, Tariq Ahmad, MD, MPH, associate professor of medicine at Yale Medical School and medical director of advanced heart failure at Yale Medicine, tells SELF.

As the heart gets weaker, people who have developed heart failure may experience the following symptoms, per the National Library of Medicine (NLM):

Because heart failure can affect different parts of the heart, symptoms may vary from person to person. Some people might not have any symptoms at all. Heart failure happens in stages, so symptoms can change or worsen over time, according to the Cleveland Clinic.

What are the main causes and risk factors of heart failure?

Heart failure can happen any time the heart is severely strained or damaged. And that can happen in numerous ways:

This is the most common form of heart disease, and it occurs when cholesterol, which is a type of fat, builds up in the arteries. As cholesterol continues to accumulate, the coronary arteries narrow and start to inhibit blood flow, according to the CDC.

Diabetes happens when a person’s blood glucose (or sugar) levels are higher than the recommended range. This occurs when your body doesn’t make enough insulin (a hormone that regulates blood sugar) or when your body can’t use the hormone efficiently, according to the CDC. Over time, high blood sugar can lead to complications such as high blood pressure and heart disease.

Medically known as hypertension, high blood pressure is used to describe the force of blood against artery walls. Hypertension is one of the most common causes of heart failure because it makes the heart work so much harder than it should need to, according to the NLM.

Sometimes, a person’s heart doesn’t develop properly before birth, resulting in a congenital heart defect, according to the CDC. There are numerous types of CHD, and some may be minor while others can negatively affect blood flow.

The immune system fends off viruses by triggering inflammation throughout the body. In rare cases, that inflammation can damage the heart, according to the Mayo Clinic. This is called myocarditis, and it most often leads to left-sided heart failure.

Infection can also affect the heart more directly. For example, bacterial infections may cause germs to stick to and ultimately damage the heart valve, which is known as endocarditis, according to the Mayo Clinic. Generally, this happens when people already have heart damage.

Sometimes, the heart valves have a hard time opening and closing. This can happen for a variety of reasons, such as being born with a heart defect or getting a severe infection like the flu, which can lead to heart inflammation.

Abnormal heart rhythms, medically known as arrhythmias, simply mean the heart beats very quickly or slowly at rest. According to the Mayo Clinic, a fast resting heart rate is defined as greater than 100 beats per minute while a slow resting heart rate is below 60 beats per minute. Everyone experiences a fast or slow heart rate at some point. For example, heart rate generally declines during sleep. But sudden, consistent changes in heart rate can indicate an underlying issue, like diabetes or coronary artery disease, which can potentially cause arrhythmias.

Metabolic syndrome refers to several conditions, including high blood pressure, excess body fat around your stomach, elevated blood sugar, high triglycerides (a fat found in the blood), and low HDL cholesterol levels. Together, these issues can increase your risk of developing medical conditions, such as heart disease and diabetes, according to the NHLBI.

Also known as postpartum cardiomyopathy, this is a rare form of heart failure that can impact people who are pregnant during their last month of pregnancy and up to several months after giving birth, according to the American Heart Association. The heart chambers get bigger and the heart gets weaker, decreasing blood flow and oxygen to other organs. People with elevated blood pressure, Black people, and people who are medically considered overweight have a higher risk of developing this form of heart failure.

Certain medications can potentially damage the heart muscle, Sanjiv J. Shah, MD, director of the Heart Failure with Preserved Ejection Fraction Program at Northwestern University Feinberg School of Medicine, tells SELF. Nonsteroidal anti-inflammatory drugs (NSAIDs), like ibuprofen, can cause water retention, which interferes with blood flow, increasing your risk of heart failure, heart attack, and stroke. Even certain meds to treat high blood pressure can actually increase the risk of heart failure, as can some chemotherapy drugs. Talk to your doctor to understand the risks versus the benefits of taking these medications.

Who is most at risk for heart failure?

There’s no crystal ball to predict who will develop heart disease, but there are some factors that can increase your risk, including:

Age: Heart failure is most common in people 65 and older, which may partially be due to normal wear and tear on the heart, according to Dr. Ahmad. On top of that, older people are more likely than young people to have conditions like high blood pressure, which increase the risk of heart failure. Research shows the risk of heart failure doubles with every 10-year age increase for people assigned male at birth after the age of 65. In people assigned female at birth, heart failure risk triples with every 10-year increase past 653.

Genetics: If someone in your family has cardiovascular disease, there’s a greater chance you could develop it, too. Having a sibling with cardiovascular disease increases your risk by about 40%, according to the Framingham Heart Study, a long-term, ongoing study identifying heart disease risks. The study, which included more than 2,300 people, also found that heart disease risk increases by about 60% if your mom had heart failure before the age of 65 and 75% if your father had it4.

Lifestyle habits: Certain things you do, like exercise, can benefit your heart while other behaviors can weaken this important muscle. For example, heavy alcohol consumption can make the heart larger and weaker. And smoking can cause heart failure because nicotine hardens the arteries5. Chronic stress is also bad for your heart—it can increase blood pressure and indirectly contribute to heart failure.

Race: Black individuals have a higher risk of developing heart failure in part because they are more likely to have other risk factors, such as diabetes and high blood pressure. There are many potential reasons why Black people have higher rates of these conditions, but systemic racism can play a role. Studies show that predominantly Black neighborhoods have fewer grocery stores and gyms than white neighborhoods, making fresh food and fitness opportunities less accessible in those areas. On top of this, research shows that Black people who are hospitalized with heart failure are less likely than white people to be referred to a cardiologist for treatment, which is a problem since specialized care improves heart failure outcomes.6

What are the different heart failure stages?

Heart failure develops in stages, generally worsening over time. The American College of Cardiology7 classifies heart failure into four stages, depending on the severity of a person’s symptoms:

What causes someone to progress from one stage of heart failure to another isn’t clear cut, according to Dr. Shah. But having risk factors for heart failure and not taking steps to control them (like treating high blood pressure) could advance you to the next stage. Usually, a comprehensive treatment plan includes making lifestyle changes (like exercising and quitting smoking), as well as taking blood pressure-lowering medication. It’s important to note that only taking medication, without making healthy lifestyle changes, can worsen your condition and lead to later-stage heart failure.

There’s no doubt that heart failure can be scary. But learning about the causes and risk factors is an empowering step toward keeping your heart as healthy as possible.