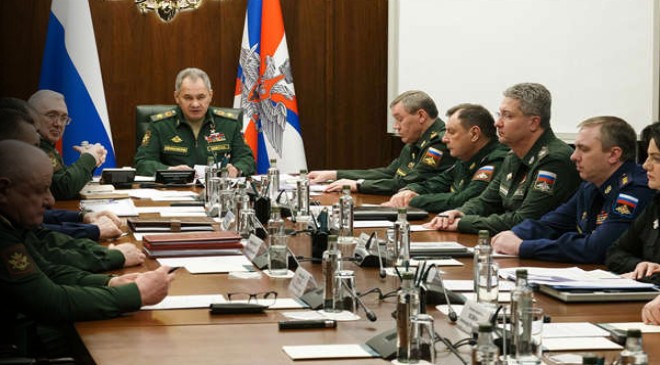 WASHINGTON — Russia is running its military campaign against Ukraine out of Moscow, with no central war commander on the ground to call the shots, according to American officials who have studied the five-week-old war.

That centralized approach may go a long way to explain why the Russian war effort has struggled in the face of stiffer-than-expected Ukrainian resistance, the officials said.

The lack of a unifying military leader in Ukraine has meant that Russian air, ground and sea units are not in sync. Their disjointed battlefield campaigns have been plagued by poor logistics, flagging morale and between 7,000 and 15,000 military deaths, senior U.S. officials and independent analysts say.

It has also contributed to the deaths of at least seven Russian generals as high-ranking officers are pushed to the front lines to untangle tactical problems that Western militaries would leave to more junior officers or senior enlisted personnel.

A senior American official said that NATO officials and the intelligence community had spent weeks waiting for a Russian war commander to emerge. No one has, leaving Western officials to conclude that the men making decisions are far from the fight, back in Moscow: Defense Minister Sergei K. Shoigu; Gen. Valery Gerasimov, the chief of the general staff of the Russian military; and even President Vladimir V. Putin.

On Wednesday, Biden administration officials, citing declassified U.S. intelligence, said that Mr. Putin had been misinformed by his advisers about the Russian military’s problems in Ukraine. The intelligence, American officials said, also showed what appeared to be growing tension between Mr. Putin and Mr. Shoigu, who was once among the most trusted members of the Kremlin’s inner circle.

Russian officials have disputed the American intelligence assertion, with the Kremlin on Thursday calling it a “complete misunderstanding” of the situation that could have “bad consequences.”

But it is hard to run a military campaign from 500 miles away, U.S. military officials said. The distance alone, they said, can lead to a disconnect between the troops who are doing the fighting and the war plans being drawn up in Moscow. Instead of streamlining the process, they said, Russia has created a military machine that is unable to adapt to a quick and nimble Ukrainian resistance.

A second senior American official said that Russian soldiers, who have been taught not to make a single move without explicit instructions from superiors, had been left frustrated on the battlefield, while Mr. Putin, Mr. Shoigu and General Gerasimov continued to plot increasingly out-of-touch strategy.

This top-down approach means that Moscow transmits instructions to generals in the field, who then transmit them to troops, who are told to follow those instructions no matter the situation on the ground.

“It shows up in the mistakes that are being made,” said retired Gen. Wesley K. Clark, who served as NATO’s supreme allied commander for Europe during the Kosovo war.

Last week, Ukrainian forces blew up the Russian warship Orsk, which had docked in southern Ukraine. Describing the incident, General Clark asked: “Who would be crazy enough to dock a ship in a port” before first securing the area?

That the Russian planners who sent the Orsk into the port were inattentive to the potential danger shows that no one is questioning decisions coming from the top, officials said. The troops at the bottom are not empowered to point out flaws in strategy that should be obvious, they said.

Military analysts said a complex chain of events, originating with a broken-down command structure that begins in Moscow, had led to the deaths of the Russian generals.

“I do not see the kind of coherent organizational architecture that one would have expected given the months of exercises and presumably even longer period of planning in advance of the invasion,” retired Gen. David H. Petraeus, who served as the head of the military’s Central Command and as the top commander in Iraq and Afghanistan, said in an email.

In an American war command structure, a four-star field commander would coordinate and synchronize all subordinate air, land and naval forces, as well as special operations and cyberoperations. The campaign would have a main objective, a center of gravity, with operations supporting that goal.

In the case of the deaths of some of the Russian generals, for instance, the problem originated far away from the battlefield, when Moscow did not respond quickly enough after Ukraine jammed Russian communications, the analysts said.

Mr. Putin’s own dishonest portrayal of the mission of the Russian military may have hurt the ability to prosecute the effort, which the Russian president initially presented publicly as a limited military operation. General Clark said that was standard Russian military practice.

He recalled teaching a class of Ukrainian generals in 2016 in Kyiv and trying to explain what an American military “after-action review” was. He told them that after a battle involving American troops, “everybody got together and broke down what happened.”

“The colonel has to confess his mistakes in front of the captain,” General Clark said. “He says, ‘Maybe I took too long to give an order.’”

After hearing him out, the Ukrainians, General Clark said, told him that could not work. “They said, ‘We’ve been taught in the Soviet system that information has to be guarded and we lie to each other,’” he recalled.

Mr. Putin’s decision to send the Chechen warlord Ramzan Kadyrov to the besieged Ukrainian city of Mariupol this week for a victory lap despite the fact that Mariupol has not fallen yet demonstrates the Russian president’s continued belief that the biggest battle is the information one, said Andrei Soldatov, a Russian security services expert.

The feared Chechen “is a general, not a real military commander,” he said, adding, “This shows that what Putin still believes is that propaganda is the most important thing here.”

Russian officials are now signaling that Mr. Putin might be lowering his war ambitions and focusing on the eastern Donbas region, though military analysts said it remained to be seen whether that would constitute a meaningful shift or a maneuver to distract attention ahead of another offensive.

The Russian army has already committed more than half of its total combat forces to the fight, including its most elite units. Moscow is now tapping reinforcements from outside Russia, including Georgia, as well as rushing mercenaries from the Wagner Group, a private military company, to eastern Ukraine.

Mr. Putin has also signed a decree calling up 134,000 conscripts.

“They seem to have no coherent concept of the amount of force it will take to defeat the Ukrainian regular and territorial forces in urban terrain, and to retain what they destroy or overrun,” said Jeffrey J. Schloesser, a retired two-star Army general who commanded U.S. forces in eastern Afghanistan. “Hundreds of thousands of more Russian or allied troops will be necessary to do so.”