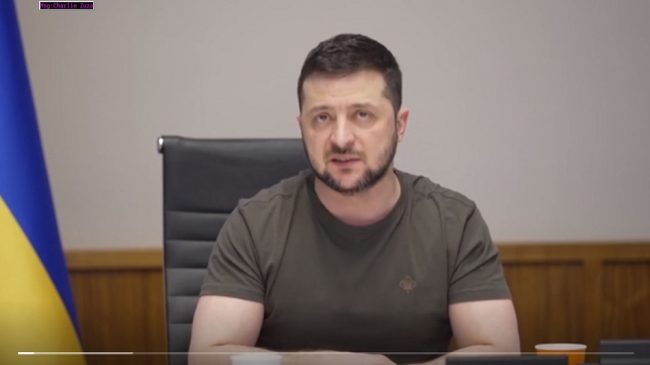 (Bloomberg) — As NATO allies discuss the terms of any potential peace deal to be struck between Russia and Ukraine, signs of strategic splits are emerging from within their ranks.

With the war now in its second month, a series of dilemmas are coming into sharp focus over which conditions could be deemed acceptable by Ukraine for any accord, especially as regards the security guarantees alliance members might be able to offer Kyiv.

There are also divergences over what further weapons to send Ukraine, and on the question of whether talking to President Vladimir Putin is helpful or not, according to people familiar with discussions that have taken place in the past week between leaders on both sides of the Atlantic and documents seen by Bloomberg.

Some of those differences spilled into the open over the weekend after U.S. President Joe Biden said that Putin couldn’t remain in power and then backtracked as his comments drew criticism.

“We shouldn’t escalate, with words or actions,” President Emmanuel Macron told French television when asked about Biden’s remarks. To avoid a military confrontation, the aim is to achieve a cease-fire now and then the withdrawal of Russian troops via diplomatic means, Macron said.

Berlin is on a similar wavelength. Chancellor Olaf Scholz’s chief spokesman, Steffen Hebestreit, told reporters on Monday that “in view of the horrible pictures that we currently have to stomach now for several days and actually weeks, the highest priority for now is to be able to reach a cease-fire so that the killing can stop.”

At a NATO leaders’ summit last week, Scholz cautioned against any rushed moves, such as abandoning the NATO-Russia Founding Act. Nixing that agreement would permanently shut the door on Moscow and remove binding commitments on troop deployments for both sides, according to two officials with knowledge of the discussions.

While Russia has burned all bridges of cooperation for the foreseeable future, Germany’s government sees the possibility that the Founding Act and its guidelines could still be needed some day, one of the people said. Ditching it would be a symbolic gesture that wouldn’t help stop the war, another said. At the end of the day, allies will have to find a way to deal with Putin whether they like it or not, the second official added.

Italian Prime Minister Mario Draghi is expected to talk to Putin this week, and will call for a cease-fire and humanitarian corridors.

Other NATO members believe the dialog that Paris and Berlin are pursuing with the Kremlin is counterproductive and could play into Putin’s hands, according to one of the documents.

The U.K., Poland and other central and eastern European nations – with the exception of Hungary – are skeptical that Russia’s president is serious about negotiating an acceptable peace deal, according to the same document.

At the NATO summit, Polish President Andrzej Duda asked the other leaders if they really believed that negotiations on the terms put forward by Putin could succeed and were acceptable, according to people familiar with his remarks. Whoever supports those conditions would be backing Russia, one of the people said, of the point Duda was communicating in his intervention.

Those who would push Ukraine to agree to a peace deal without the full withdrawal of Russian troops “serve Putin,” said a diplomat from one eastern European nation. And those who are reaching out to Putin frequently “do so only for the purpose of their campaigns” domestically.

U.K. Prime Minister Boris Johnson was similarly skeptical of Putin’s intentions, another person said. Ahead of the meeting, Johnson told reporters that Putin had already crossed a red line with his actions in Ukraine.

“It is right to make the most of any possible negotiated settlement, but clearly we need to be alive to the fact that he has not lived up to his promises,” Max Blain, the prime minister’s spokesman, said on Monday. “Throughout we have seen Putin say one thing and do another and so that is the imperative, that we judge him and his regime on how they act.”

Despite the setbacks on the ground, the U.K. doesn’t believe Putin’s strategic aims have changed, according to a senior British official.

Two other senior diplomats from the group of nations dubious of dialog with Putin told Bloomberg they were worried that Macron could push Zelenskiy into agreeing to neutrality on Russia’s terms in exchange for a cease-fire. They noted, however, that Macron had been clear in refuting Moscow’s demands about Ukraine’s territorial integrity and sovereignty.

Zelenskiy has said he is open to adopting a neutral status as part of a peace agreement with Russia but that such a pact would have to come with security guarantees and be put to a referendum.

One of the diplomats said that leaving open questions about Ukraine’s territory to future diplomatic talks risked repeating past errors, and would complicate the scope of any security guarantees. One senior western European official questioned whether guarantees would apply to Ukraine’s internationally recognized borders or to those that emerge after the war, another document seen by Bloomberg shows.

Macron has said he is talking to Putin because Zelenskiy asked him to, as well as to try to secure humanitarian corridors. A diplomat said that Macron could also convey information to the Russian president about how badly the war was going for his troops, as those around him were likely cocooning him from the truth.

An Elysee official said France doesn’t do anything without consulting Zelenskiy. France is asking for the total withdrawal of Russian forces, the official added, noting that Macron says so publicly.

Ukraine’s president has repeatedly said he will not compromise on the country’s territorial integrity.

European governments are split along similar lines over whether they should expand the scope of sanctions to Russia’s energy sector.

Another area of disagreement among allies is how heavily they should arm Ukraine as they weigh concerns that a cornered Putin could revert to using weapons of mass destruction. Allies are also adamant that as they take these decisions they will not contemplate any direct NATO military involvement in the war.

Leaders from the U.K., the Baltic states and most eastern European countries have called on allies to send more weapons to Kyiv, including anti-aircraft capabilities, to allow Ukraine’s forces to keep pushing back against Russian assaults and bombs, people familiar with the NATO discussion said.

A senior official told his counterparts that Putin didn’t need an excuse if he wanted to act, he would just invent one, according to one of the documents. Although they have provided Ukraine with military support, some western European governments noted there are limits to the types of weapons that can be provided due to fears that events could escalate out of control, the document shows.

A French official said that sending tanks — which Macron has publicly ruled out — and jets would pour oil on the fire and play into the hands of hard-liners in Moscow.

Meanwhile, a person familiar with the thinking in Moscow praised Macron by saying his stance has been positive and useful to avoid further escalation. Macron understands that sending weapons to Ukraine would only create more targets for the Russian army and make a cease-fire more difficult, the person said.

Asked about Macron declaring weapons like tanks a red line, Zelenskiy told the Economist magazine that France was afraid of Russia and that Boris Johnson was a leader “who is helping more.”