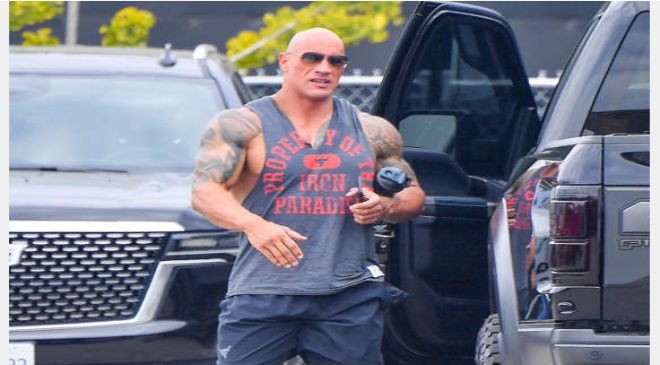 These Are The Rock’s 5 Best Muscle-Building Secrets

They don’t call him Dwayne “The Rock” Johnson for nothing. The WWE superstar turned A-List actor lives up to his nickname with his rock-hard physique. At 49 years old, the multi-hyphenate is constantly training with no signs of slowing down. Whether pumping up for an upcoming role or just training to improve, his Herculean body proves that whatever he is doing is working.

With the age of Instagram, you no longer have to smell what The Rock is cookin’. Just follow along and he will tell you! Throughout his years on the app, The Rock has been known to break down his gym routines, training schedules, and some of his best-kept muscle-building secrets to his more than 300 million followers.

“The work is very hard but it’s why we play the game. Plus, if it comes easy—it’s boring,” he says.

Ready to see how you can train like The Rock? Read on to find out, and next, check out The Rock’s Exact Breakfast, Lunch, and Dinner.

In early 2021, as the actor was deep in training for his upcoming film, Black Adam, Dwayne Johnson detailed a back and bicep workout for his followers. “My entire back workout consists of all supersets,” he said in an Instagram video. “So there is a lot of blood and volume being pumped into the muscle, and then I’ll transition to biceps.”

“Keep the rest at a minimum, just enough to recover,” he wrote.

This “insane pump and intense workout” was the second workout of the day for the former WWE wrestler. He had already completed his fasted cardio first thing in the morning, before moving on to “clanging and banging” with weights in the evening.

“Go hardcore, balls to the wall every time you work out,” said Johnson. “Leave it all in the gym.”

2. He listens to his body

Dwayne Johnson is no stranger to injury. Throughout the decades of putting his body through the ringer, he has recovered from “multiple knee surgeries, quad & adductor tears off pelvis, ruptured surgically repaired Achilles, multiple hernia surgical repairs,” to name a few.

Now he is the walking definition of “work smarter, not harder” when it comes to the time he spends in the gym. “There were a lot of times when I was younger and I would throw a lot of weight on the squat, a lot of weight on the bench press and ignore the pain,” he shared. “These days, when your body speaks to you, you’re smart to listen to it.”

3. He keeps his workouts slow and controlled

Slow and steady wins the race! We’ve all heard the phrase. Johnson is a strong believer in the saying, but throws in his own little twist. “No herky jerky movements.”

“A microcosm for life,” he said alongside a video of a controlled set of pull-ups. “Slow, steady precision – then go in for the kill.”

After his laundry list of injuries and surgically repaired body parts, the father of three leaves no room for missteps in his Iron Paradise. “Push yourself to the limit but be smart with the weight. No ego training,” he shared.

4. He had a psychological shift

For many people, motivation is often hard to find when it comes to hitting the gym. We can all say “we want to get in shape,” or “we want to change our lifestyle.” But actually doing these things, may be another story. For The Rock, however, he sees his workouts as “a privilege.”

“I’ll share a little philosophy with you guys that’s helped me achieve some success over the years,” he said. “When it comes to hard work and things I’m passionate about – years ago, I stopped saying ‘I have to’ and started saying ‘I get to.'”

This “big psychological shift” changed the way he approaches “the daily grind.”

“I ‘get to’ train hard and push myself to the breaking point,” the Jungle Cruise star shared. “I ‘get to’ be the hardest worker in [gym].” By making this shift in perspective, you will “start to feel that grind, gratitude & growth.”

5. He knows that his diet is key

It’s no surprise that diet plays a HUGE role in Johnson’s success. He eats five to seven strategically planned meals a day. Each is jam-packed with carbs, vegetables and proteins to help him refuel after a grueling gym sesh.

While training for Black Adam, his diet was “very strict.” “All food is weighed & measured so my conditioning can come in on point,” he wrote on Instagram alongside a video of his breakfast.

His massive breakfast consisted of whole eggs and egg whites, beef tenderloin, a bowl of oatmeal with blueberries, a gluten-free English muffin with smart butter, stevia and cinnamon and a powdered greens and fiber drink.

“Remember, diet is the key,” he added.

But Johnson isn’t all work and no play. Far from it, actually. His cheat meals have become something of an Instagram sensation. “I love my cheat days,” he said in a 2021 Delish interview. “They have become legendary.”

“I turned them [cheat days] into Olympic events–pizza, brownies, pancakes, as much as I could eat,” he said.

In 2018, while filming Hobbs & Shaw, Johnson shared a snap of himself with what appeared to be an XL Hawaiian pizza. “Got the glorious text from my strength & conditioning coach that read ‘DJ, need a mid-week carb up for your big scenes tomorrow,'” he shared. “‘Eat a pizza and send me your pics in the morning’ to which I responded – ‘Watch. This.'”

Even though it seems an XL pizza would cancel out all the hard work from his healthy week, for Johnson, it’s all part of a “really smart, precise, intense training and diet” regimen.

“I love these midweek pizza carb ups like a drunk loves free peanuts,” he joked.