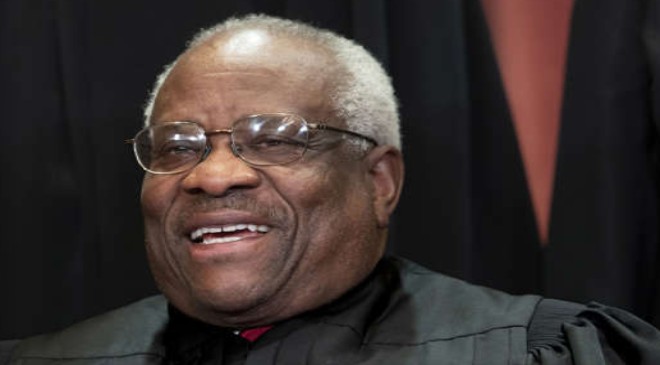 Thomas, the most senior justice on the nine-member court, said he often worries about the long-term repercussions of trends such as “cancel culture” and a lack of civil debate.

“By doing this, you continue to chip away at the respect of the institutions that the next generation is going to need if they’re going to have civil society,” Thomas said.

Rulings for the upcoming year will set laws on hot-button political issues, including abortion, guns and voting rights.

The court has leaned increasingly conservative since three justices nominated by former President Donald Trump joined its ranks. Progressives have in turn called to expand the number of justices on the court, including during the 2020 presidential primary. Democrats in Congress introduced a bill last year to add four justices to the bench, and President Joe Biden has convened a commission to study expanding the court.

“I’m afraid, particularly in this world of cancel culture attack, I don’t know where you’re going to learn to engage as we did when I grew up,” he said. “If you don’t learn at that level in high school, in grammar school, in your neighborhood, or in civic organizations, then how do you have it when you’re making decisions in government, in the legislature, or in the courts?”

In addition to condemning “cancel culture,” Thomas also blasted the media for cultivating inaccurate impressions about public figures — including himself, his wife and late Supreme Court Justice Antonin Scalia.

Ginni Thomas, Justice Thomas’s wife and a longtime conservative activist, has faced scrutiny this year for her political activity and involvement in groups that file briefs about cases in front of the Supreme Court, as well as using her Facebook page to amplify partisan attacks.

As Congress prepares to hold confirmation hearings for Judge Ketanji Brown Jackson, Thomas recalled his 1991 confirmation process as a humiliating and embarrassing experience that taught him not to be overly prideful. During congressional hearings, lawmakers grilled Thomas about sexual harassment allegations from Anita Hill, a former employee, leading him to call the experience a “high tech lynching.”

If confirmed, Jackson would be the first Black woman on the court, and would join Thomas as its second Black justice.

Thomas, who grew up in Georgia during segregation, said he held civility as one of his highest values. He said he learned to respect institutions and debate civilly with those who disagreed with him during his years in school. Based on conversations he’s had with students at his university lectures in recent years, he said he doesn’t believe colleges are welcoming places for productive debate, particularly for students who support what he described as traditional families or oppose abortion.

Thomas did not reference the future of Roe v. Wade, the landmark 1973 Supreme Court decision that extended abortion rights throughout the country. The court this year is scheduled to rule on Dobbs v. Jackson Women’s Health Organization and whether Mississippi can ban abortions at 15 weeks. While the court deliberates over the case, lawmakers in Florida, West Virginia and Kentucky are advancing similar legislation hoping the court overturns Roe and establishes new precedent.