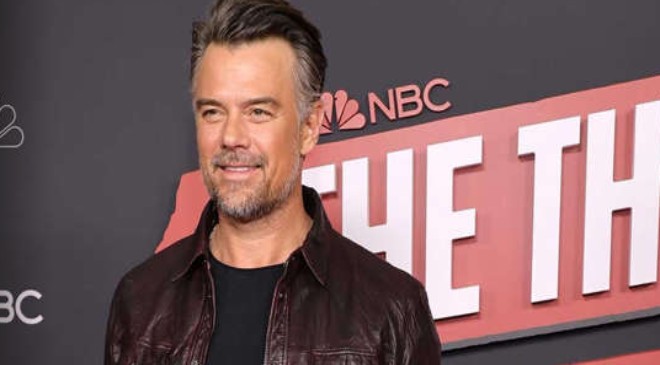 For Josh Duhamel, getting engaged back in January was something he could see coming for some time.

The handsome star walked the red carpet at the premiere screening of his new NBC series The Thing About Pam, held at The Maybourne hotel in Beverly Hills, California, on Monday, and he spoke with ET’s Lauren Zima about his recent romantic development.

When asked when he knew that his fiancée, Audra Mari, was the one for him, Duhamel admitted with a smile, “Oh, I knew that pretty early on.”

“She’s an awesome girl, [and] she’s perfect for me,” he continued. “We’re both from North Dakota and I think there’s a commonality that we have. She’s great.”

The 49-year-old actor and the 28-year-old former Miss World America have been linked since 2019. Duhamel took to Instagram on Jan. 8, to announce their engagement, and he shared a beachside photo from when he romantically popped the question.

This year has been an eventful one for Duhamel, and not just in regards to getting engaged. It was also announced that he would be starring in the second season of the Disney+ series Mighty Ducks: Game Changers.

“This was a movie i grew up watching. This was also an opportunity to work in Los Angeles! I was tired of traveling,” Duhamel shared. “I love this character. This character’s a lot of fun. He’s like this hardcore hockey coach who pushes these kids — much farther than he probably needs to.”

“And I love Lauren Graham,” he added with a smile.

Getting to work with Graham on the Disney+ series may have been one reason that Duhamel is now falling in love with the actress’ iconic TV series, Gilmore Girls.

“I’ve become a huge fan of Gilmore Girls… I recently found Gilmore Girls, and I’m not afraid it admit it, it’s just fantastic,” he shared. “I watched it with my girl and she introduced me to it. She’s a huge Lorelai fan.”

Before he takes to the ice in the second season of Mighty Ducks: Game Changers, Duhamel is donning a fancy suit and a robust hairdo as defense attorney Joel Schwartz in the NBC limited series, The Thing About Pam.

The show revolves around Renee Zellweger’s Pam Hupp, a real-life convicted murderer whose involvement in a complex slew of crimes and conspiracies is the focus of the true crime-inspired drama.

While his own style in the series is a fairly different look for the actor, Zellweger’s transformation is on a whole different level. When asked what he first thought when he saw Zellweger in full make-up and costume, Duhamel recalled thinking, “Woah, she’s going there.”

“But it doesn’t surprise me. I mean, Renee has always been that girl who’s like a chameleon, who just because whatever character she’s playing,” Duhamel shared. “And this one’s no different.”

“As an actor, I really, really learned a lot from that girl,” he added. “She was 100 percent focused, she was so prepared, and it makes everyone else around her want to rise up and meet that.”

The Thing About Pam premieres March 8 on NBC.